No other band – or “group”, as their outspoken boss, Mark E Smith, insists on calling them (“A band is what plays in Blackpool”, he once said dismissively) – could have more insider stories than the Fall. To date, 66 members have had a hand in their frequently exceptional but occasionally disastrous 39-year career.

Most were reduced to minor roles before they were sacked or left of their own accord to preserve their ebbing sanity but not Steve Hanley, the dutiful bass player and one-time embodiment of the much-admired “Fall sound”. Second only to Smith in terms of longevity, he served his time from 1979 to 1998.

The Big Midweek is the first of its kind. Previous books about the Fall and Mark E Smith (including, to an extent, Smith’s 2008 autobiography Renegade, which I co-authored) have been written by outsiders who have focused on his eccentric style of leadership, the sackings and heavy drinking. This is not the whole story.

While there are many fascinating anecdotes about the great enigma that is Mark E Smith – such as a funny passage about the difficulties of choosing his birthday present after failing to impress him over the years with a series of war-related gifts, including the board game Risk (he couldn’t decipher the instructions), a set of model soldiers for his collection (from “the losing side”, unfortunately) and a Dad’s Army video (“What the f***’s this you’ve got me?’) – Hanley has wisely opted to balance the narrative by detailing the rich supporting cast as well. 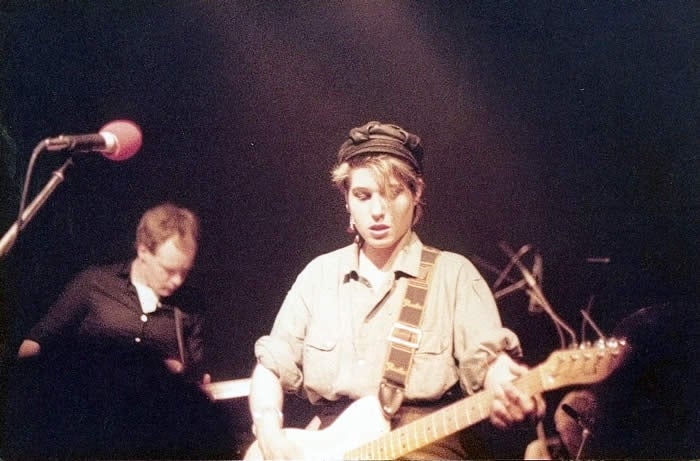 Here we have his old mate and ex-member Marc Riley; the bulldog-like Kay Carroll, who was both the group’s original dogma-driven manager and Smith’s girlfriend; the enigmatically aloof guitarist Craig Scanlon; Smith’s first wife and later guitarist and songwriter, Brix; and the drummer Karl Burns, an adult Bash Street Kid with a love of igniting (literal and figurative) fireworks.

With Olivia Piekarski’s assistance, Hanley has ditched common rock memoir histrionics in favour of a deadpan tone that recalls a bass-wielding Alan Bennett. Hanley mainly did his best to carry himself with a loyal dignity through it all: touring, recording, recovering from ale and amphetamine hangovers, riding the mood waves that regularly infected the whole group and being a father.

The sound he created throughout his 19-year stint, however, was the fierce flip-side of this image of a self-deprecating Manchester Everyman. Too humble to admit it in print, he had it all: power, aggression, melody, rhythm and originality. An often overlooked facet of the Fall’s extensive output is the consistent quality of the musicianship, despite all the comings and goings – like Pink Floyd or Genesis but with far more idiosyncratic results.

Similar to the way in which Bo Diddley’s guitar (one of Smith’s few mainstay influences) sounds like the automobile engines of the 1950s, each Fall album is a document of its era. Their last great release, Your Future Our Clutter in 2010, sounds like a barrage of grumbling roadworks, computer wheezes and intrusive digital supermarket bleeps.

And then there’s Smith’s voice: a gnarled racket spouting spiteful, clever, obscure, sarky lyrics. If, as Martin Amis recently said in this publication, “Art is about tension,” then Smith is a grand master. A proud anti-musician, his directorial style harks back to the age of maverick film-making, to the likes of Rainer Werner Fassbinder and Werner Herzog. Not for him learning the rules then breaking them: his rules are self-taught, outlandish and unbreakable. But for it all to work, he needs strong and talented musicians such as Hanley – just as those directors needed their intuitive cast members – to interpret his impulsive commands into some feasible reality.

This special connection falls apart in the final 30 pages. More bridges have been burned and Hanley and Smith are by now two scattered men trying to put themselves together. Every other gig is a dark pantomime: a rehearsal for the end of the world. Onstage in New York in 1998, the journey reaches its grim conclusion. There is a violent row; Smith is later arrested. Hanley, along with the drummer and guitarist, feels that he has no choice but to leave. In his post-Fall life, he becomes a school caretaker. As for the mercurial frontman, he’ll just go on. And on. The Big Midweek is a vivid and sensitive testament to an enthralling (anti-)musical family and the glorious chaos they can rightly call their own.