It’s a cold afternoon in Elephant and Castle, but the meeting room at the Feminist Library is packed with women. The range of ages is startling: as young children are led in by their father, an older woman is buying the donated Chelsea buns someone has brought along. Inside the library’s meeting room, people are beginning to gather around tables laid out with paper and pens.

There’s a good reason for braving the cold, for today the Feminist Library is hosting “Knowledge is our Superpower”, the first in a series of salons celebrating the library’s 40th anniversary. Featuring a comic drawing workshop, a lecture on Batgirl and a panel discussion, the day is themed around a question whose answer is probably, in this setting, an inevitable conclusion: “does feminism need a library?”

Libraries have long been part of the feminist movement. When Sylvia Pankhurst opened her East London Federation of the Suffragettes shop in 1913, she included a lending library so that local women could educate themselves. Today, women’s archives endure across the UK and overseas – from the award-winning Glasgow Women’s Library to Harvard University’s Schlesinger Library on the History of Women in America. They keep vital records on the women’s movement, domestic history and the lives of people otherwise misaligned from the exclusive formal remit of traditional collections. 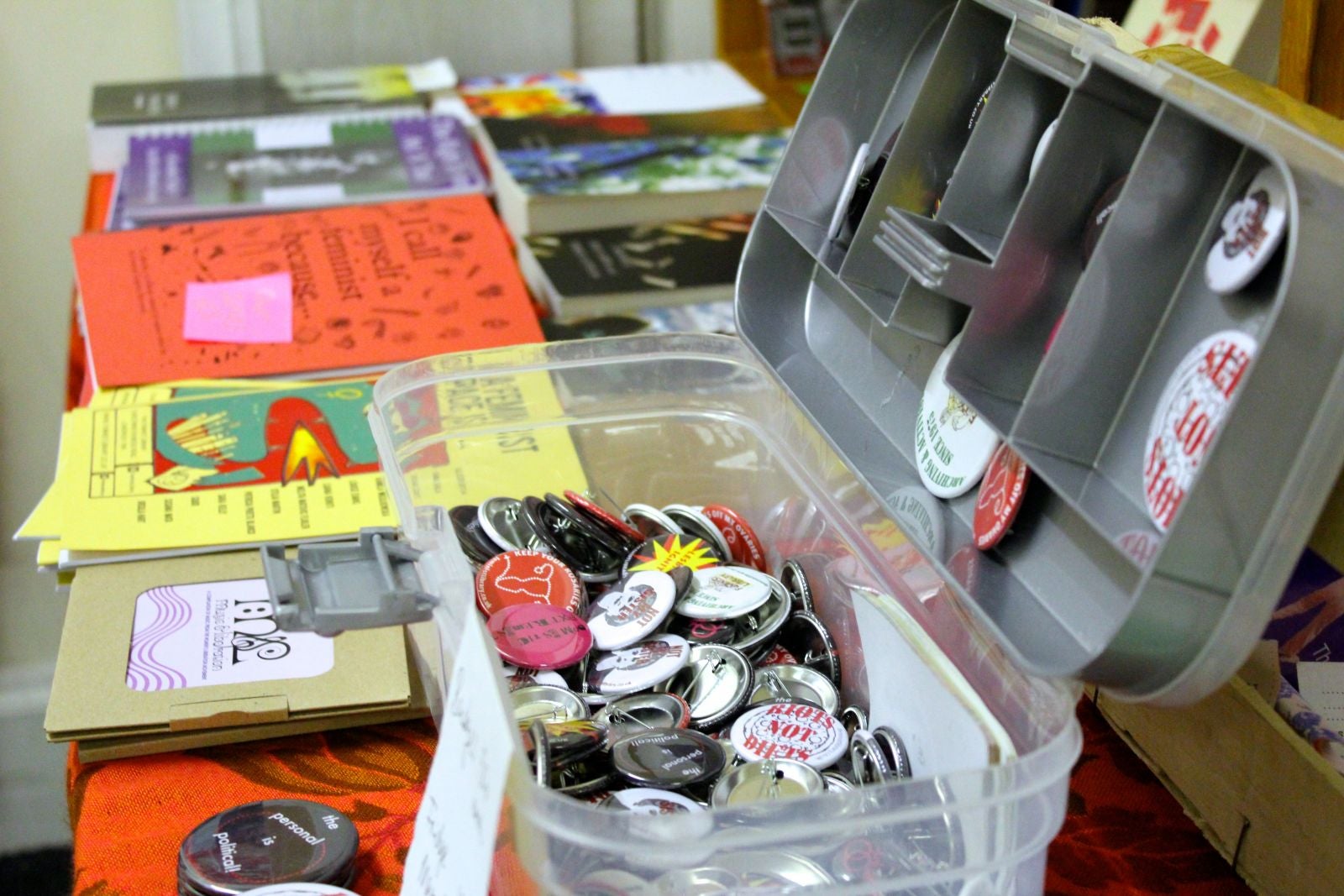 Badges and zines for sale at the library.

To the volunteers at London’s Feminist Library, though, the space is more than just an archive: it’s also a centre of community. For lottie moon and Cristina Rios, the Library is a place where exciting new dialogues have become possible. When they were young, they tell me, you didn’t really talk much about feminism. “It was the dirty word”, says lottie.

Working at the Feminist Library allows them to constantly think and challenge their ideas. Indeed, the physical form of the Library itself forces discussion. Organising the archive necessitates confronting the most pressing issues in feminist thought – even if it’s just a matter of deciding where to shelve a book. The library uses a radical classification system with categories for lifestyle, the arts and sexuality, but conflict still sometimes arises: two volunteers, for instance, recently argued over what the library’s stance on sex work should be, moving books on the subject between the “work” section and “crimes against women”.

It seems a funny story, but it’s also good reminder of the library’s relevance at a time when feminism is undergoing a mainstream renaissance. The Feminist Library’s rich archive includes material from worldwide, and from women of all class backgrounds and ethnicities. The range of zines and books available prove that the struggle for women’s rights has always been intersectional – a fact certain voices in the contemporary feminist sphere would do well to remember. This year’s salon series is themed around “Activating the Archives” and is designed to bring their largely second-wave collection to life. After all the same issues, lottie and Cristina tell me, keep coming up. When the first box I look in contains a 1989 “Rebel Girls’ Rag” with the headline “Bearing the brunt of the Tory budget”, I see their point.

The salon series isn’t just about sharing ideas, however; it’s also about raising awareness of the library’s work and, crucially, funds. Christina and lottie laugh when they explain their current funding situation: with austerity hitting women hardest and arts funding cut, it’s no surprise the Feminist Library is struggling. “We’re women, and we’re a library – of course we don’t have money!” This year, they’ll be campaigning to leave their run down second-story rooms and find a new building to house the collection. 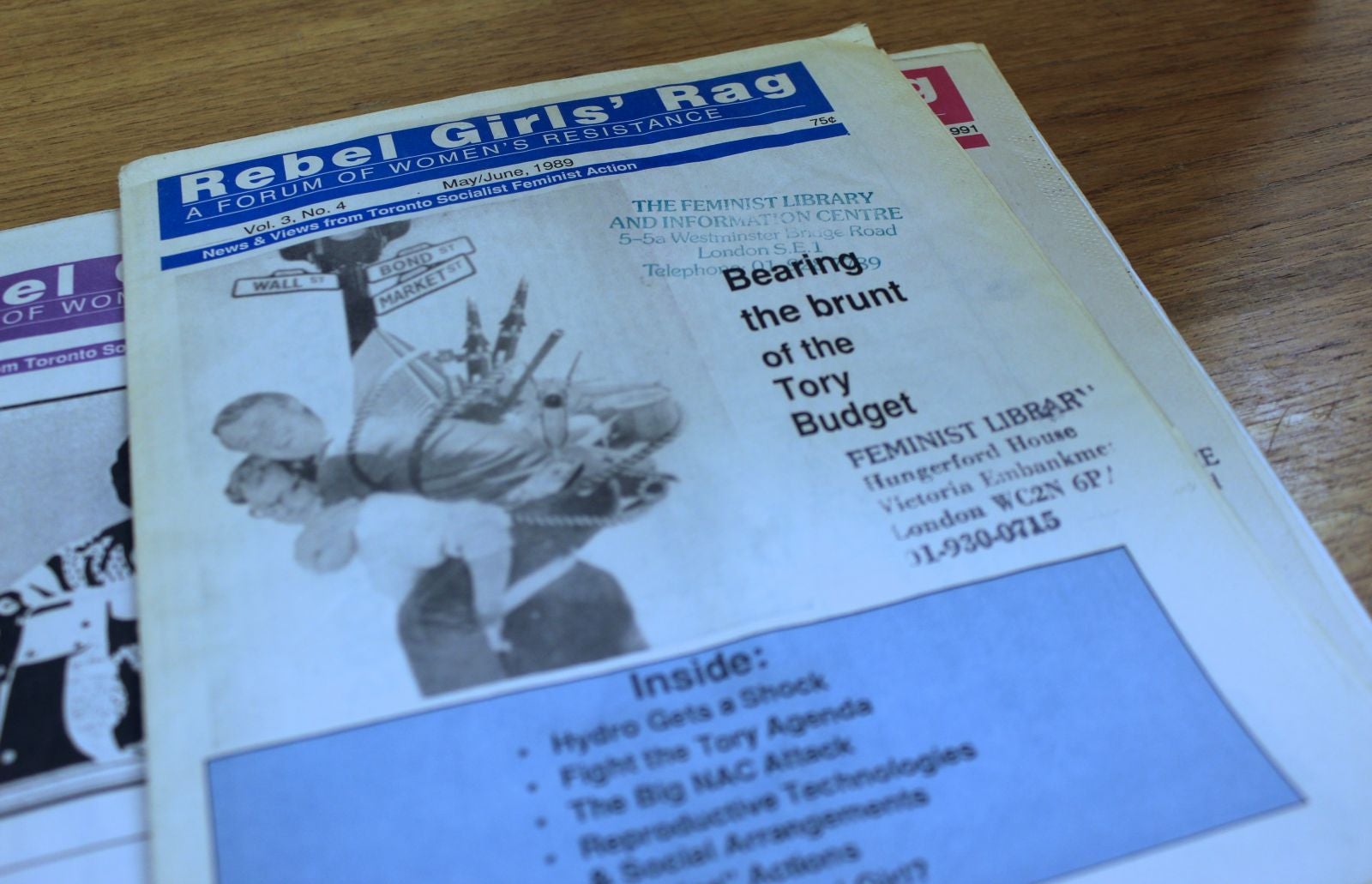 Rebel Girls’ Rag: “Bearing the brunt of the Tory Budget”

Meanwhile, they continue to grow in strength. The Southbank Centre’s Women of the World festival has invited them to host a stall, for which they plan to make a giant birthday cake, and they’re increasingly forging links with women’s archives elsewhere.

It’s vital, however, that they are able to expand further. Even in the left, the volunteers tell me, so many spaces are still male-dominated. Here, there is a sense of relief “the minute you step through the door”. As we stand in the library’s fiction archives discussing Sylvia Townsend Warner and children’s books, I feel it myself. Here is a space where you don’t have to start from first principles – is feminism legitimate; why do women need to be able to tell their stories – but can speak freely. At “Knowledge is our Superpower”, a midwife in her late 50s expresses surprise she’s not heard of the library before, but says it feels “like coming home”.

And more and more women are coming: now with 50 people on the books, the week I visit ten new volunteers came through the door. lottie wants to fill the new building with armchairs, build a space where “you can just come, on a shitty afternoon, and sit back”. To make a place for respite, discussion, community events and a historical archive: it’s an ambitious plan, but the women are confident they can build on recent momentum. Feminism is enjoying a resurgence; “now”, they say, “is the moment”.

The Feminist Library’s second 40th anniversary salon, “Feminism in Fairy Tales”, will be held on 28 February.