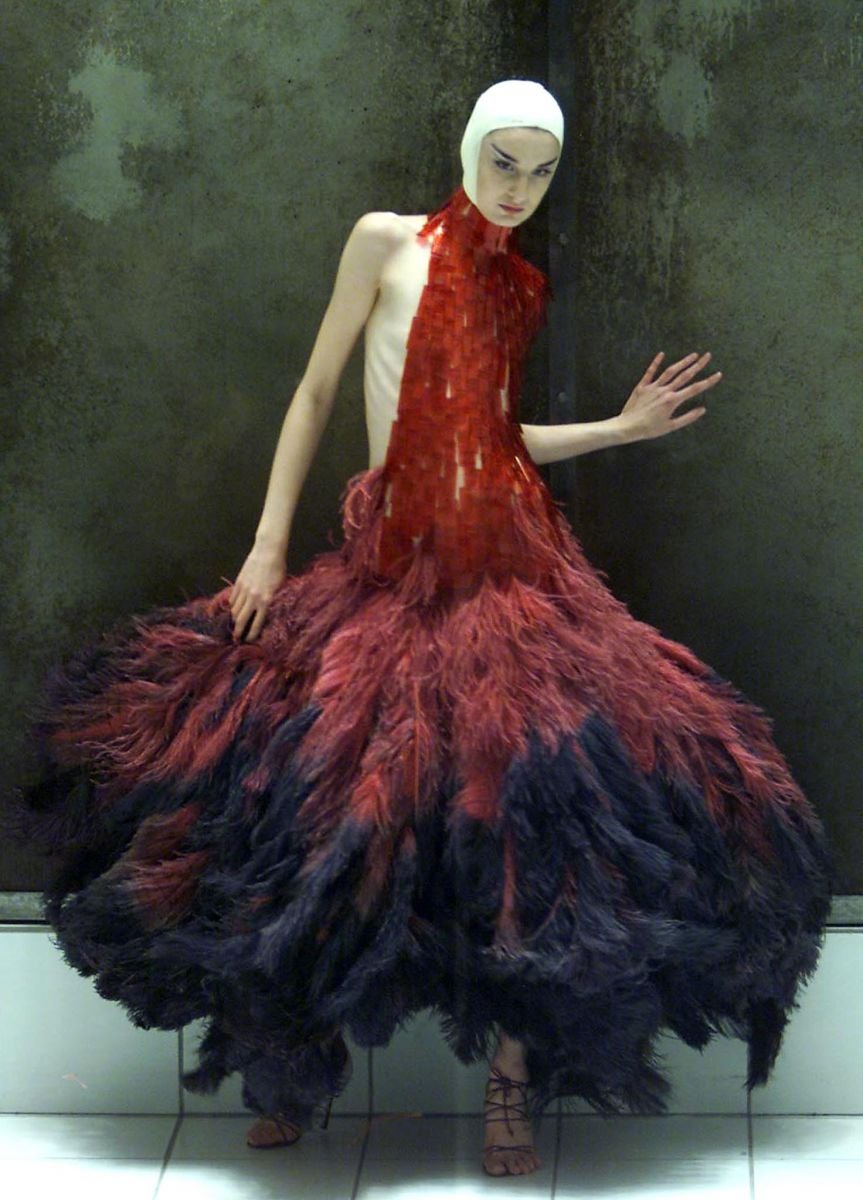 What is high fashion for? And who is high fashion for? At the end of Dana Thomas’s joint biography of Lee Alexander McQueen and John Galliano, Gods and Kings (Allen Lane), she writes that today’s fashion shows last just 12 minutes on average, while: “Designers are hired hands . . . and few outside the industry know their names.”

Haute couture presentations – which used to be society matrons’ way of picking out their wardrobe for gala balls and fundraising lunches – are now loss-leaders aimed at boosting the parts of a company’s business that make real money, such as perfume and handbag sales. A couture dress might take 100 hours to make and its sale price will never cover this, if it is sold at all; a handbag sells for upwards of a dozen times the cost of manufacture. (The most expensive bag currently on sale at Net-a-Porter is a Lady Tassel crocodile tote by Gucci, yours for £23,030.)

Because of these commercial pressures, where there was once Monsieur Lacroix or the Comte de Givenchy showing off exquisite gowns in a dove-grey showroom, today’s couture shows follow one of two formulas, both designed to attract publicity to the brand. The first is extravaganza: 50 girls done up by Chanel as milkmaids on a replica model farm, or a parade of Jean-Paul Gaultier wedding dresses finishing with Naomi Campbell wrapped in cellophane like a floral bouquet. The second option, typified by Elie Saab, is to have a beautiful but numbing parade of column gowns designed to lure actresses looking for a red-carpet outfit that won’t land them on the worst-dressed lists.

A designer’s name is now merely a brand, rather than a guarantee that the named person had anything to do with the clothes. In 2006, months after designing the Galaxy – an absurdly flattering square-necked midi dress that worked its way down the celebrity scale, from Rachel Weisz to Carol Vorderman – Roland Mouret split up with his financial backers. He might have had the ideas but they owned his name and he spent the next four years designing collections that were only allowed to use his initials. Even for those who retain some creative control, it is impossible for a single person to oversee the vast, sprawling empire of a modern label. “I tend not to like an awful lot of what is going out under my name now because it is just all product,” Vivienne Westwood told this magazine in 2012. “Who needs it? I like my Gold Label, the one that I do. The rest of my stuff comes from very talented people – and I ought not to have said what I have just said – who go to the archive and just rework it.”

The careers of McQueen and Galliano span this transition from doing fashion for fashion’s sake to regarding the frocks and theatrics as just the front of house for a huge luxury goods business. Galliano was born first, in 1960, and graduated from St Martin’s School of Art in 1988. McQueen graduated from the same college (by then renamed Central St Martins) in 1992 after a period as an apprentice in Savile Row and working for an Italian designer. Both were from working-class London families – Galliano’s father was a plumber, McQueen’s a taxi driver – and both grew up gay at a time when the Sun was still running stories about “poofter” vicars and pundits referred to Aids as “the gay plague”. As a result, both felt anxious about their roots: Galliano hid his homosexuality from his Catholic family and reinvented himself as a louche dandy, wearing a Salvador Dalí pencil moustache and shirts unbuttoned to the navel. McQueen went the other way: he cultivated a reputation as an East End loudmouth, effing and blinding and claiming that he wrote swear words on the inside of a jacket for Prince Charles while working on Savile Row. (One French journalist, aghast, shuddered over “that haircut, très football-club de Liverpool”.) Their differing styles are perfectly illustrated by the way they chose to take their bow after a collection: Galliano would appear dressed as Napoleon, or a matador; McQueen once came out and dropped his trousers.

McQueen had another reason for building a shield around himself. Andrew Wilson’s new biography, Alexander McQueen: Blood Beneath the Skin (Simon & Schuster), written with the co-operation of the McQueen family, reveals that he was raped as a child by his brother-in-law. The trauma haunted several of his early collections, which featured models smeared with blood, or criss-crossed with tyre prints. (Thomas’s book also alludes to the abuse, with perhaps the most jaw-dropping wrong-headedness I’ve read this year: “The attack didn’t turn him into a homosexual – he knew by then that he was gay. But it did destroy him emotionally and psychologically.”) 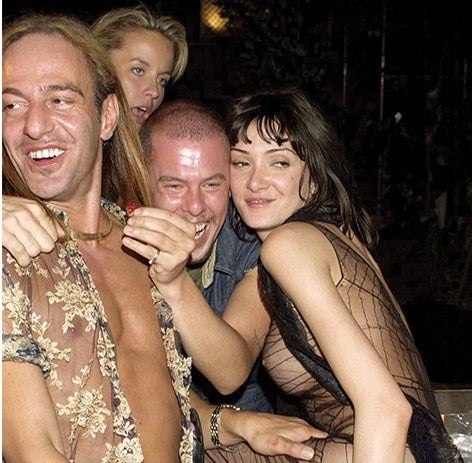 Both men struggled initially in the industry, scraping together the money for the early shows that made their name, and both dealt with the stress heaped on them by success by turning to drink and drugs. Thomas and Wilson conjure up the particular madness of the fashion treadmill, with its constant quest for newness and the inevitability that a triumph would be followed by a fall. By definition, you cannot be the height of fashion year after year.

There are other similarities. Both relied on an aristocratic female patron and muse in their early days who was unceremoniously ditched when they got famous. In Galliano’s case, it was Amanda Harlech, who styled his shows and gave them their distinctive look. When he was hired by Givenchy and then Dior, she got phased out – and ended up moving to Chanel, where Karl Lagerfeld has since relied on her for decades. For McQueen, the soulmate was Isabella Blow, a bipolar socialite with a taste for enormous hats. She championed McQueen when she worked at Vogue, but he dumped her when he succeeded Galliano at Givenchy. In 2007, she killed herself by drinking weedkiller in the garden of her country home.

These books are haunted by suicides and burnouts. Days after his beloved mother died from cancer in 2010, McQueen hanged himself in his Mayfair flat. He had left an unfinished collection full of religious icons and macabre feathers: he had designed his own requiem. (His funeral, at St Paul’s, was fabulous, too.)

It is possible that Galliano might have followed the same path. In 2007 his closest colleague, Steven Robinson, told his demanding, moody, bingeing master that he was leaving after 20 years together. Robinson told the rest of the staff he was going to visit his parents in England; instead he visited his cocaine dealer, went home and snorted lines until he had a heart attack. Galliano carried on working, just as he did when his father died. Then, in 2011, the house of cards collapsed. Galliano assaulted a woman at a Paris café, telling her: “Dirty Jew face, you should be dead.” Footage then emerged of a previous anti-Semitic rant. He was fired.

Hitting rock bottom probably saved Galliano’s life. He has since told a court that he was a “blackout” addict, unable to form new memories. After the scandal broke, he went into rehab and is only now tentatively returning to work in fashion.

It is always too easy to ascribe a single cause to a suicide or mental breakdown but it does not seem unreasonable to implicate the fashion industry in Galliano’s and McQueen’s fates. Their success came at a cost: those around them were either too scared for their jobs to question the binges and dysfunctional lifestyle, or too willing to look the other way as long as the clothes kept coming out and the profits kept rolling in. Thomas records that while at Dior, Galliano did not know how to send an email or withdraw cash from an ATM and he never learned to drive or had to use the Paris Métro. In this bubble, no wonder he decided that the vagrants he saw on his morning runs along the Seine were “romantic” and promptly created a high-fashion collection based on the homeless and the mentally ill.

That outrage must surely be the inspiration for “Derelicte”, the centrepiece of Ben Stiller’s satirical comedy Zoolander (2001), which skewered the ridiculous self-importance of the fashion world. Reading these books, I took to scrawling “Zoolander” in the margins whenever something eyebrow-raising happened: when Galliano went to a friend’s funeral in a pair of gold sequinned shorts, or when McQueen’s mum, who spent his early shows backstage offering skinny women lemonade and sandwiches, sat in the front row and watched a model wearing a pair of trousers so low-slung they were nicknamed “cuntsters” pretend to put her finger in her vagina and then lick it.

“She thought it was shocking but she understood the meaning behind it all,” McQueen said at the time.

Beyond the provocations and the pomposity, what about the clothes? I have always loved Galliano’s work at Dior, particularly his huge, exquisite ball gowns in pastel silks, folded like origami or screen-printed like petals. But while these demonstrate all the beauty and intricacy that a team of couture seamstresses can muster, they are first and foremost pretty frocks. McQueen’s creations, many of which will be on display at the V&A in London in the retrospective “Savage Beauty” from 14 March, come closer to art: the iridescent shoals of stiff-hipped minidresses from his Plato’s Atlantis collection, complete with the deformed shapes of his “armadillo” shoes; the gown made of hundreds of razor clam shells that Erin O’Connor ripped apart on stage in his Voss show; the aluminium corset that had to be screwed on to the model for his 1999 collection the Overlook. If fashion is a constant struggle between creativity and commercialism, then Alexander McQueen was its scrappiest prizefighter.