Some games lend themselves to easy categorisation. You can play them, learn their patterns and systems, master them and move on. Such ease of categorisation means you can focus on the details, like how a scientist encountering a new type of beetle can centre not on the fundamental questions of what a beetle is or what’s it for, but instead on the minutiae of why it is different to the other beetles. Some games, however, don’t lend themselves readily to categorisation. Sometimes a game won’t fit into any particular category at all – instead it sits there, like a cross between a duckbilled platypus and a Rubik’s cube, giving you that look babies get when they can’t decide if they want to laugh or fart.

80 Days, thankfully, is the smiling sort of Dubik’s Platycube, insomuch as it is an incredibly fun and engrossing game. But it still defies classification. Is it a text adventure? Is it a puzzle game? Is it some sort of visual novel? Does it have poisonous spurs on its hind feet? It contains elements that I’ve run into before, but the whole is something new. 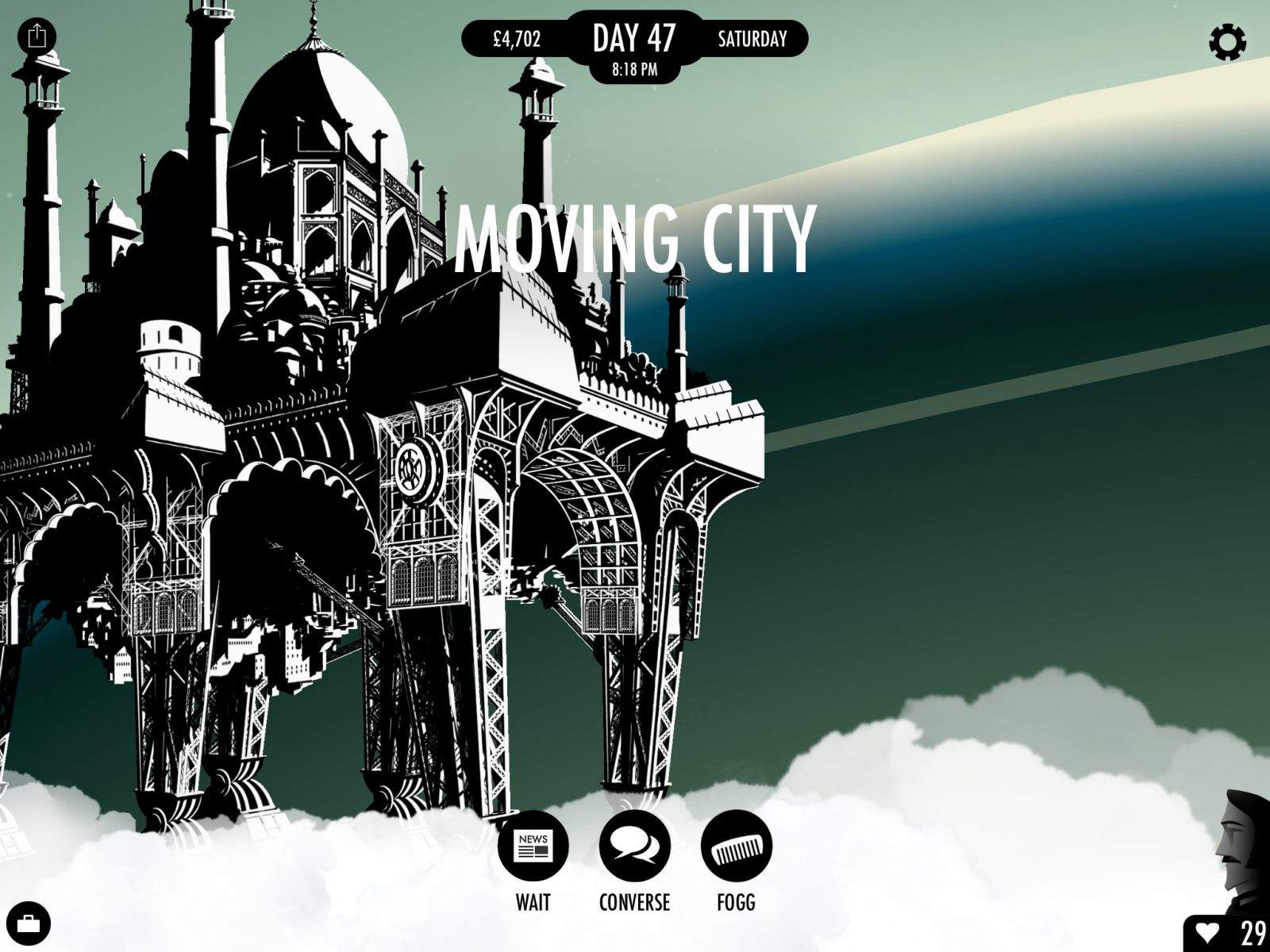 The meat of 80 Days is based around the Jules Verne story Around the World In 80 Days, in which stoic Englishman Phileas Fogg and his manservant Jean Passepartout attempt to get around the world at record-breaking speed for a bet. The game differs quite markedly from the original story, especially the version I am most familiar with (largely because Phileas Fogg isn’t a lion) – but to go into the specifics of how the game differs would inevitably lead to spoiling the surprises, so let’s not do that. Instead, let’s look at what is so odd about 80 Days.

80 Days is a game that you play from a very unusual perspective. The story is largely relayed through text in the first person by Passeportout, as if you’re reading his story, but you’re not really playing as him, despite the fact that you make nearly all of the decisions that affect the narrative. The nearest comparison would be to a Twine game, or a Choose Your Own Adventure book, but though they share the mechanic of choosing which course of action is adopted by the protagonist they typically do not share the perspective. The game differs from classic text adventures like Zork because you don’t use commands, but rather you’re forced to choose from lists of existing options.

In a typical game like this you’d expect to play from the first-person perspective of the main character and choose what they do – with the story typically told in the second person – but 80 Days gives you both control over Passepartout and the world and characters around him. One early example involves negotiating the line at a train station: it can be done merely by choosing the lines in the story that lead to the path of least resistance, or (if you like) you can make things more difficult for Passpartout, and in the process bring out different traits in his character. Other elements, like Fogg’s reactions or descriptions of places and people, can also be selected – so maybe a town is bustling as you arrive, or maybe Passepartout is too busy looking at the skyline, and misses seeing all that.

This is a strange but enjoyable experience, and the prose through which the story is delivered is sparse yet intriguing. Locations, characters and modes of transport are sketched out well enough to create impressions of depth and to fire the imagination, without the sort of detail that might cause them to lose their mystique. The game draws you into its world, delivering surprises all the time. 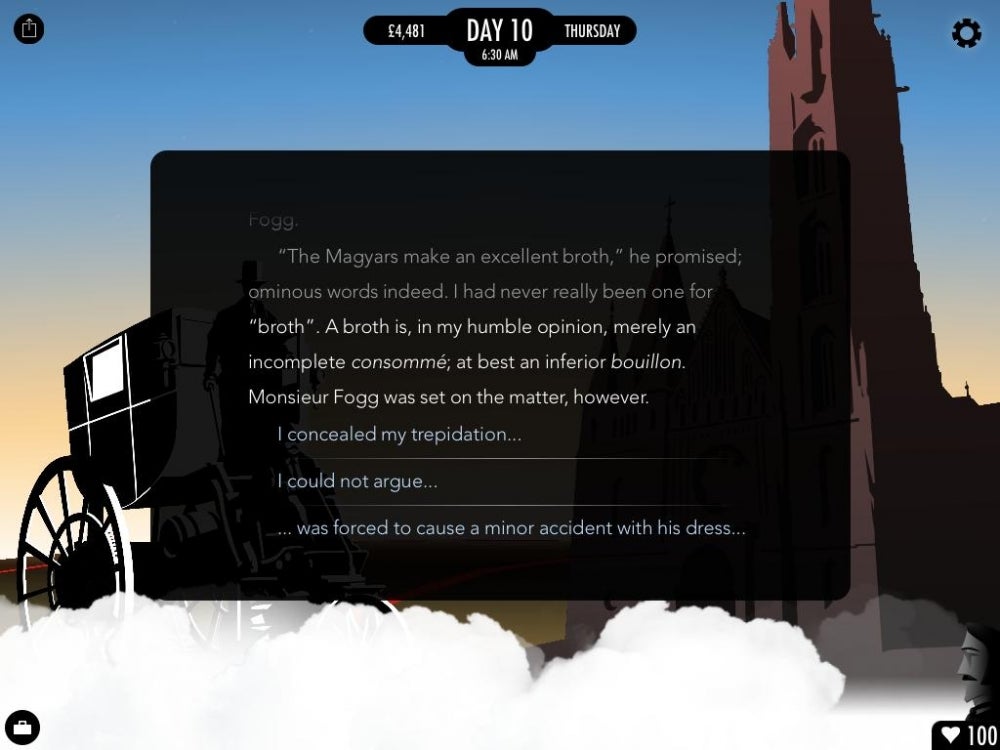 Unlike the old Choose Your Own Adventure books – which were perfectly happy to kill your character off for making a wrong turn, or even making what looked like a right turn – 80 Days lets you have fun with its narrative. Mistakes can prove costly to the journey, but Passepartout has a range of talents, and fortune often favours the bold. Indeed, the game encourages you to see just what Passepartout can get away with.

80 Days only suffers when it tries to be more conventionally gamey – for example, the inventory and market system feels like an unnatural fit, as though it had been grafted on from a different game with a different purpose. Also the system for obtaining money from banks can be frustrating, with the knowledge that if you do find yourself out of money at any point there’s a good chance you won’t make it home on time. The characters are so lively that it feels sort of out of place to find them meekly waiting for days as money is wired to them.

In some ways the fact that 80 Days is a game and, as such, has challenge and goals to it, is almost a shame. If it merely consisted of reading the adventures of Fogg and Passpartout as they embarked on their different journeys, subject to the whims of the reader, it might in some ways be a better experience. The world of 80 Days is one that I would love to explore in greater detail without that ticking clock looming large, but there is always another boat to catch, always that next connection to make. That is not to say you can’t come back again, though, as 80 Days easily withstands multiple play-throughs, not just over each route but in terms of how you play the characters. Maybe you focus purely on getting from A to B, maybe on helping people out along the way, or maybe you play the game as The Foggster And JP: Lads On Tour Maximum Colonial Bantz Edition. There’s always a new way to approach it.

I still don’t really know how to classify 80 Days. But since I’m still playing it I suppose the most important classification is evident . . . it’s good.

Now listen to a discussion of 80 Days on the NS pop culture podcast, SRSLY: