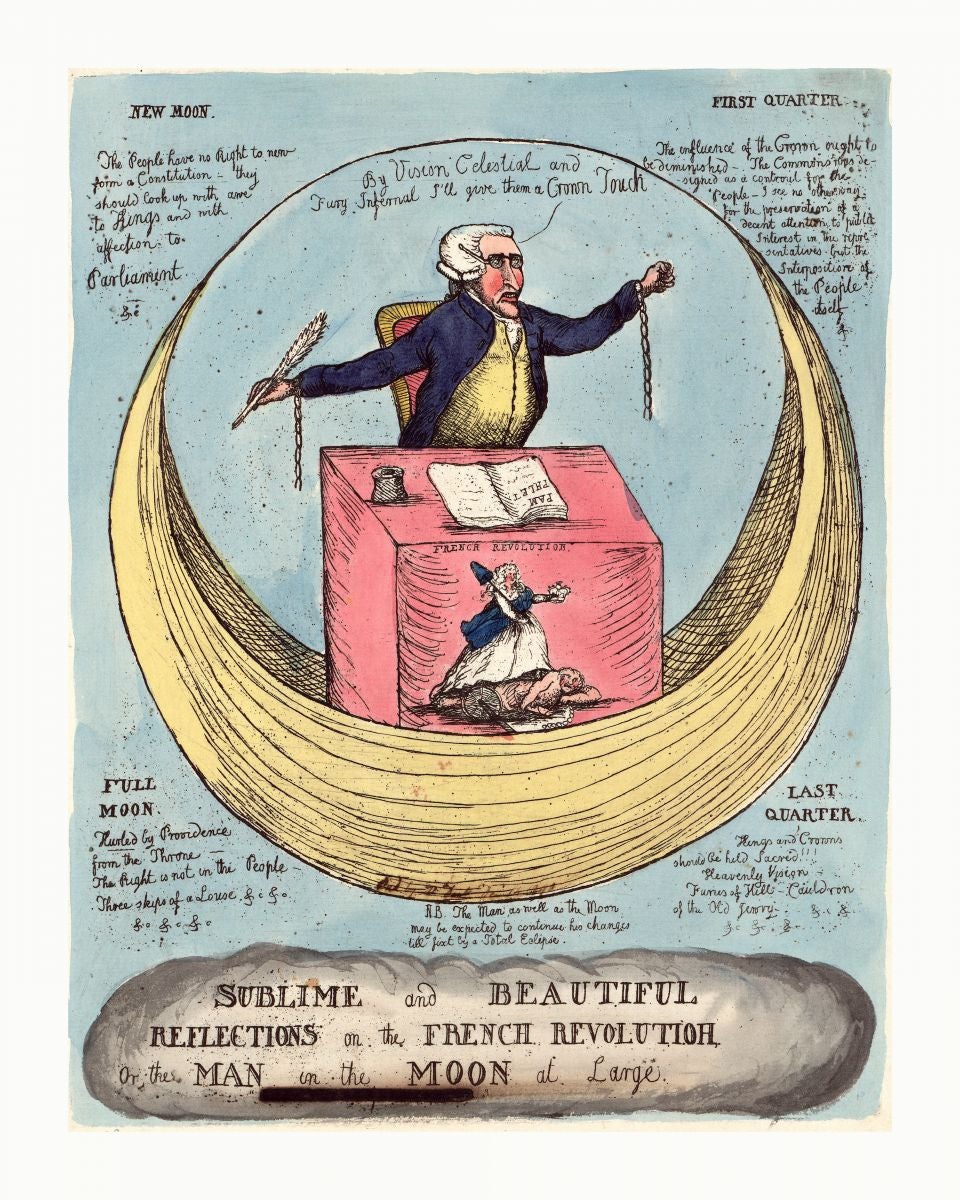 Independent spirit: Burke as “the Man in the Moon”, holding forth on liberty and revolution (1790)

Eighteenth-century Britain was rich in outsize political figures: the Pitts, father and son; the defiant rapscallion and demagogue John Wilkes; the prince of parliamentary debaters Charles James Fox; the ponderous Lord North, author of the policies that provoked the American Revolution; and the anti-slavery campaigner William Wilberforce, to mention only a few. But although William Hague has published well-received biographies of Wilberforce and the younger Pitt, none of these figures has much to say to the 21st century.

In striking contrast, their contemporary Edmund Burke still strikes sparks. He is the subject of an admiring 2013 biography by the maverick Conservative MP Jesse Norman, for whom his ideas form a “vast pool of wisdom”. He is a hero for Maurice Glasman, the prophet of Blue Labour. On the other side of a deep philosophical divide, the authors of a pamphlet published by the left-of-centre campaign group Compass go out of their way to warn their readers against the siren voices of those who seek to reclaim Burke for the left.

His political longevity is due in part to his extraordinary command of the English language. As David Bromwich shows in the first instalment of his projected two-volume biography, the Whig statesman’s thunderous prose evokes memories of Milton’s poetry. But he was a master of the rhetorical rapier as well as the broadsword. “When bad men combine, the good must associate,” is one example. “A great empire and little minds go ill together,” is another. In a different register is the most haunting of all Burke’s aphorisms: “What shadows we are and what shadows we pursue.”

But Burke was not just an accomplished rhetorician; still less was he a study-bound philosopher. He was a professional politician, immersed in the flux of unpredictable events and engaged in hard-fought battles against other politicians, driven by deeply held convictions. He fought with fierce, dogged passion. In a splendid phrase, Bromwich tells us that there was “a passion in him that is finally mysterious, a passion almost outside the reach of words; and it was this that gave his words their power to invigorate and unsettle”.

When Burke’s blood was up, his feelings were apt to run away with him. In a preposterous paean, he once insisted that the British House of Commons was “filled with everything illustrious in rank, in descent, in hereditary and in acquired opulence, in cultivated talents, in military, civil, naval and politic distinction that the country can afford” – and there are plenty of other examples. When he thought his honour had been impugned, as he frequently did, he could be equally extravagant.

Although Burke saw magnanimity as a prime political virtue, he was often unforgiving and ungenerous to opponents. He was a bundle of paradoxes: a notoriously imprudent prophet of prudence; a Whig ideologist who ended up as a Tory hero; a prickly, thin-skinned, insecure Irish outsider, determined to make his way in a political nation dominated by secure insiders. He described himself as a novus homo and insisted that wise rulers should assimilate new men like him. Yet he idealised the English aristocracy as “great oaks” shading the country, while excoriating individual aristocrats who fell below the standards he imagined for them.

He was too original to classify in his own day or to fit the pigeonholes of academe in ours. The American political theorist Russell Kirk called him the “father of conservatism” and this has become the conventional wisdom. There is something in it. Burke certainly believed in property, hierarchy and tradition and defended them with passion and occasional savagery.

However, typecasting him as a conservative makes his legacy banal and obscures its subtleties. Burke, the believer in hierarchy and tradition, was also Burke, the champion of the voiceless millions of Bengal; Burke, the friend of the liberty-loving American colonists in their dispute with the British crown; and Burke, the hammer of the grasping Protestant landlords of his native Ireland and their cruel penal laws.

For Lord Acton, the 19th-century historian and Gladstone protégé, Burke was one of the three greatest liberals in British history, along with Gladstone and Macaulay. Macaulay, too, considered him the greatest man since Milton. Gladstone thought his writings on Ireland a “magazine of wisdom”. Woodrow Wilson saw him as a paramount interpreter of English liberty. John Morley, Gladstone’s disciple and eventual biographer, wrote an admiring study of Burke while making it clear that he differed with him over the French Revolution.

Later, the maverick socialist Harold Laski praised the “consistency of his principles” and “the amazing accuracy of his insight”. Later still, Raymond Williams, one of the architects of the first New Left, applauded Burke for emphasising “the interrelation and continuity of human activities” and for building a philosophical barrier against the “aggressive individualism” that was already chipping away at the foundations of the old society he loved and that threatens to destroy the integument of duty and trust that holds society together in our own day.

The first volume of Bromwich’s biography covers only the first 27 years of Burke’s public life. We shall have to wait until the next volume for his treatment of Burke’s battles against the cruelty and oppression of the East India Company in Bengal and the savage mob rule spawned by the French Revolution – the battles for which he is chiefly remembered. But the Burke of these battles can be understood only against the background of the earlier Burke; and the themes that Bromwich explores in this first volume give meaning and depth to the story we can expect in the second.

At the start of the book, Bromwich briskly dismisses the “commonplace that Burke was the father of modern conservatism”. The Tory Dr Johnson was a friend of Burke’s but, according to Bromwich, he thought Burke “a vile Whig”. What that meant in practice was that Burke supported the Glorious Revolution settlement of 1689, thought parliament’s authority was superior to the king’s and was alarmed by the king’s encroachment on parliamentary sovereignty. These were not Tory – or for that matter conservative – causes in the 18th century when they were still in fierce contention and when the outcome was still unknowable.

If they are part and parcel of the present-day conservative world-view, it is because Burkean Whigs defeated Johnsonian Tories when battle was joined. The liberal Burke of Acton, Macaulay, Morley and Woodrow Wilson was not a fiction of their imaginations; he was a real person. The admittedly imperfect constitution of liberty that we know in 21st-century Britain owes as much to him as to any other single person.

Burke the liberal was not a democrat but Bromwich tells us that he was a thinker “whom democrats must learn from” – and in a host of ways he proves his point. In our own day Amartya Sen has argued, I think convincingly, that the essence of democracy lies not just in head-counting but in what he calls “public reasoning”; and that has been a central theme of democratic discourse since Pericles’s funeral oration in ancient Athens.

The trouble is that the still, small voice of public reasoning can easily be drowned out in popular clamour or perverted by manipulative leaders and their retinues of spin doctors; Britain has contended with plenty of both in the past 30 years. The inconvenient truth – well known to the greatest democratic politicians but rarely revealed to the people for whom they claim to speak – is that, to survive, democracy must be protected against itself. Otherwise, a people alienated from their leaders and impatient with the inevitably tedious routines of parliamentary government may fall for the spurious glitter of charismatic populism. The careers of Margaret Thatcher and Tony Blair show all too well what that truth means in practice.

This is where we have most to learn from Burke. His lessons are not easy or com­fortable. The first and most important of them is that the voice of the people is not necessarily the voice of God. Even the anti-revolutionary Burke of the 1790s thought of himself as a reformer and wrote that when the people were in dispute with their rulers, “The presumption is at least upon a par in favour of the people.” But that was only a presumption; it did not invariably hold good. For Burke, as for all but the shallowest political leaders in our history, the people could be wrong as well as right. He was happy to divert them with “innocent buffoonery”, he wrote, but not if they mixed “malice in their sports”, as happened when an anti-Catholic mob terrorised London during the Gordon riots and, later, when the Paris mob forced the terrified royal family to quit Versailles and instal themselves in the Tuileries in the heart of the city.

For Burke, Bromwich tells us, the relationship between the people and the political elite was that of patient to doctor. Popular disorder was a symptom of a malady disturbing the body politic. The statesman’s task was to interpret it, as a physician’s task was to interpret a physical symptom. Repression was rarely the right medicine; therein lay the meaning of Burke’s vicious attacks on the British government’s inept handling of the disorders in the American colonies. But though wise doctors listen to their patients, they do so the better to understand the symptoms. At the last resort, it is their responsibility to rely on their professional judgement to decide how the disease should be treated. To do anything else is to betray their calling.

In the same way, members of parliament must make up their own minds how to represent their constituents. They should listen – but they should also listen to other representatives of other constituents. They owe their electors their independent, un-coerced judgement of what is best for the country as a whole and not just for their constituency. That is what it means to be a representative: representatives are not delegates. This high view of the relationship between electors and elected, Bromwich argues, was shared by James Madison, the most intellectually fertile of the founding fathers of the American republic.

It is an arresting thought. Amartya Sen’s democracy – democracy as public reasoning – is impossible without social spaces in which reasoning can take place. With all the manifold failings of today’s American republic, the complex checks and balances that have been central to US federalism from the beginning offer a template for a system in which Sen-style democracy could flourish. I like to think that if Burke were to return from the grave, he would campaign for a British constitution based on the principle of devolved power. He was, after all, the great champion of what he called “the little platoons”, which he saw as the nurseries of public affection.