As the drop-shadow WordArt title graphic for The Apprentice rolls onto our screens for the second episode this week, viewers may be asking themselves whether they really possess the endurance for this. Do they have what it takes? Are they just a lily-livered passenger, not up to the task, or will they demonstrate the ruthless stamina required for watching 19 people trying to figure out how to make a glorified Christmas jumper?

Yes folks, hold on to your skill-sets, it’s a design task.

Those with institutional Apprentice memory will remember such stand-out inventions from previous series as the inapplicable app “Slangatang”, sexless dating site “Friendship and Flowers”, the “Book-Ease” that made reading more difficult, the useless utility belt “Pooch Pouch”, the million “Splish-Splash” screens Amazon declined to buy… the list is an endless production line of ill-conceived inventions.

This episode, in an echo of the Today programme politely investigating the “pre-loading” phenomenon among Young People, The Apprentice decides it should go all techy on us, a few years too late, by asking its fresh batch of non-trepreneurs to design and sell a piece of “wearable technology” to retailers.

“Wearable technology” brings to mind those gaudy rubber watches with lots of functions that make you fitter, happier, more productive, only ever really championed by twenty-something media industry insiders and the Chancellor. But this flies way over the heads – probably at peak Shard level – of the candidates, as they look more towards the superfluous-LED-infested-garments market.

The teams remain divided up into boys and girls, the latter exchanging their initial team name “Decadence” (a play on “decade”, apparently) for something more suitable, “Tenacity” (a play on “ten”, maybe? Let it go, guys). They are all woken in the usual way – hustled into a fleet of cabs at the dead of morning to pointlessly stand in a tenuously-related London location. Lord Sugar turns up at Imperial College to command them to make some wearable tech for the three retailers he’s inevitably “laid on”. Of course he has.

He suggests Robert – the “arty farty” one who tried to make hotdogs “so Shoreditch” in yesterday’s episode – be project manager for the boys, because of his modish east London ways. Robert duly shirks the task, insisting he’s too “luxury” for such an ordeal. But who then? Which of the boys could possibly lead a task on inventing a piece of wearable technology? I mean, there is Scott. He was only oddly specifically prepped for such a task by having attended a conference on the very topic of wearable technology a fortnight ago, but go on then, he’ll have a go. 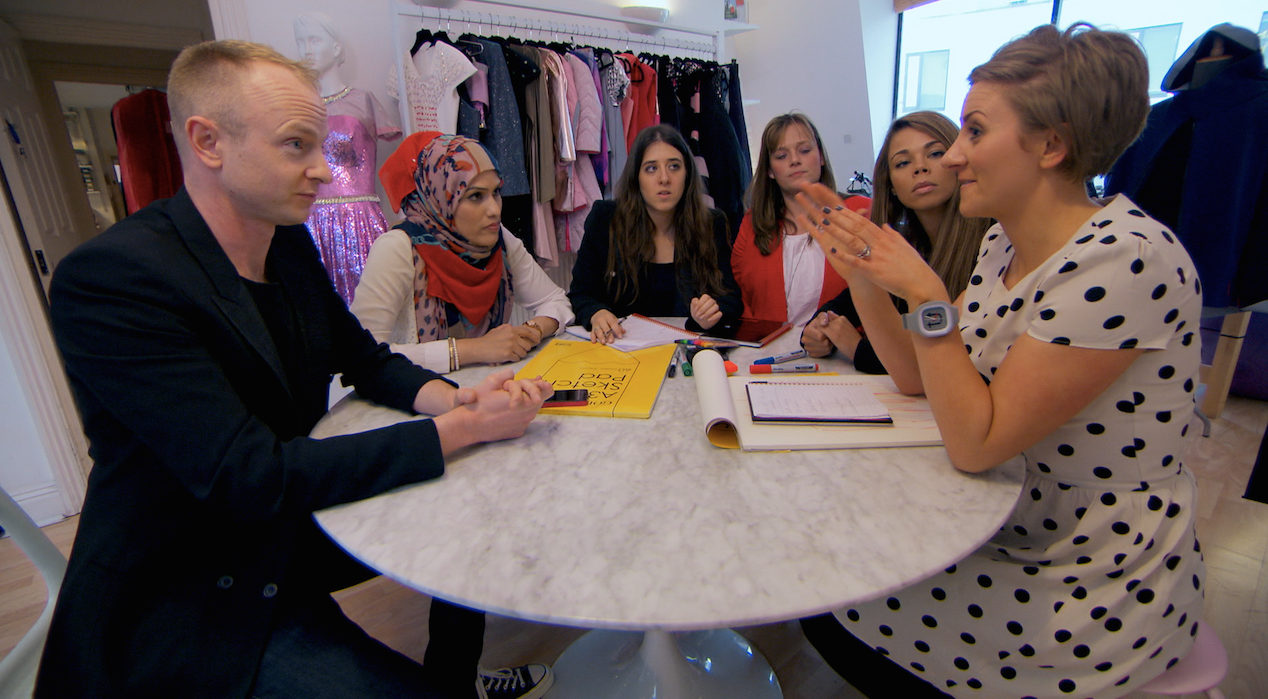 There is also reluctance among the women’s team to lead the task, as they each deploy their best hosiery- or scarf-based excuses for why they should avoid pioneering a fashion task. Eventually, marketing officer Nurun puts herself forward, only to insist later on in the heat of the boardroom that she was “coerced”, woefully lamenting that if the challenge had been to create “a burka that changes colours”, this would have been her remit. We all have our strengths, Nurun.

She proves unable to make any of the big decisions – like whether their jacket should have flashing lapels, a heat regulator, or a built-in pocket phone charger, so they go for all three. Why this garment in particular? “All women are wearing jackets,” is Lindsay’s explanatory – and only – contribution.

The jacket returns with some enormous plasticky epaulettes on each shoulder: solar panels. Wouldn’t they have worked hidden beneath the material, shielded from the sun, the team earnestly debates. “That’s one thing we didn’t ask,” their team leader sadly concedes. Karren Brady watches it all with her “I don’t have to deal with this shit in the House of Lords” face on. 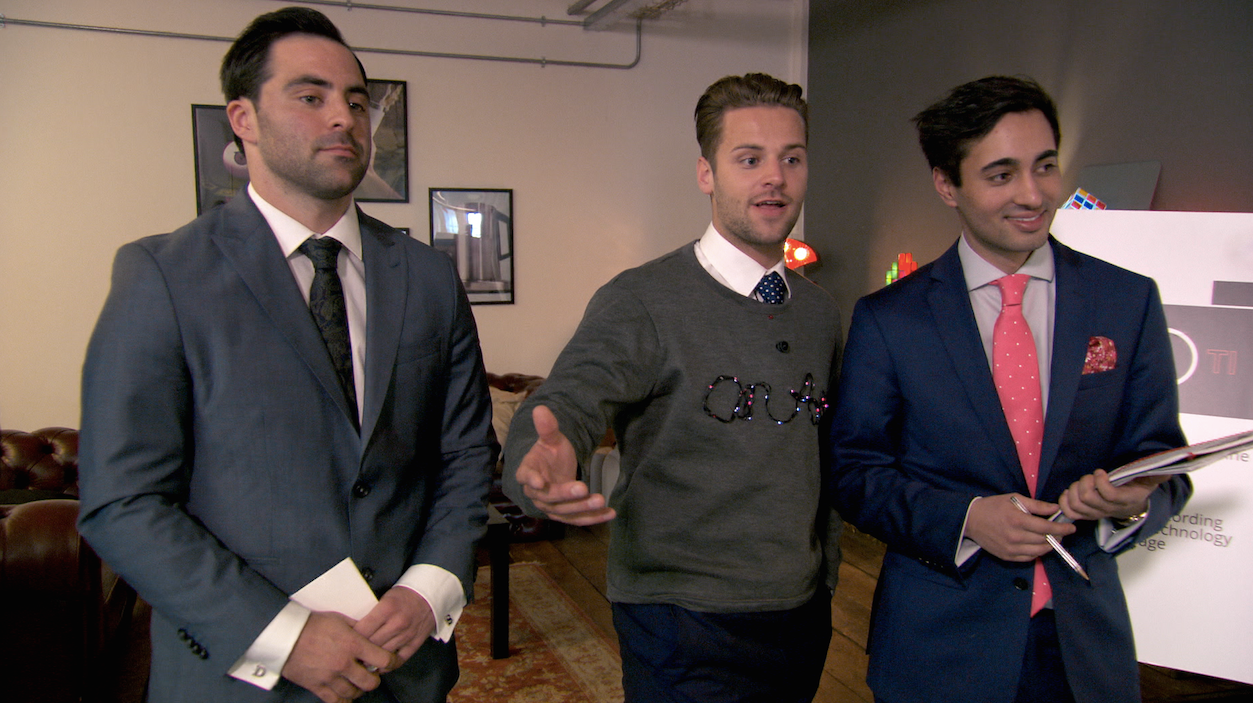 Sarah, the villain of episode 1 with her insistence on “females” being “more attractive”, does a sinister job of modelling the solar powered fairylight-cum-hotwater bottle invention in a pitch to a retailer, standing stock-still, hand on hip, as her pockets slowly warm up and lapels flicker with despair. “We can switch on a few lights, and help you attract someone that you like,” moots Ella Jade in her pitch, as civilisation shrivels up and dies.

Like a convict psyching his fellow inmates up for a breakout, Scott sweats aggression into the whole task. “I’ve put my balls on the line,” he breathes. All this heartache for a creepy grey jumper with a spyhole and some Christmas lights on the front. “Privacy is history,” chirps Robert, merrily demonstrating the jumper’s attached camera as GCHQ softly places its orders.

Daniel clearly sees the product’s shortcomings during his pitch, as he admits to the retailer: “You wouldn’t go in a public place with it. No, you wouldn’t go out and about.” It’s a rare moment of honesty in the programme, which nearly costs the pub quiz director (yeah) a rich future of lies and obfuscation. 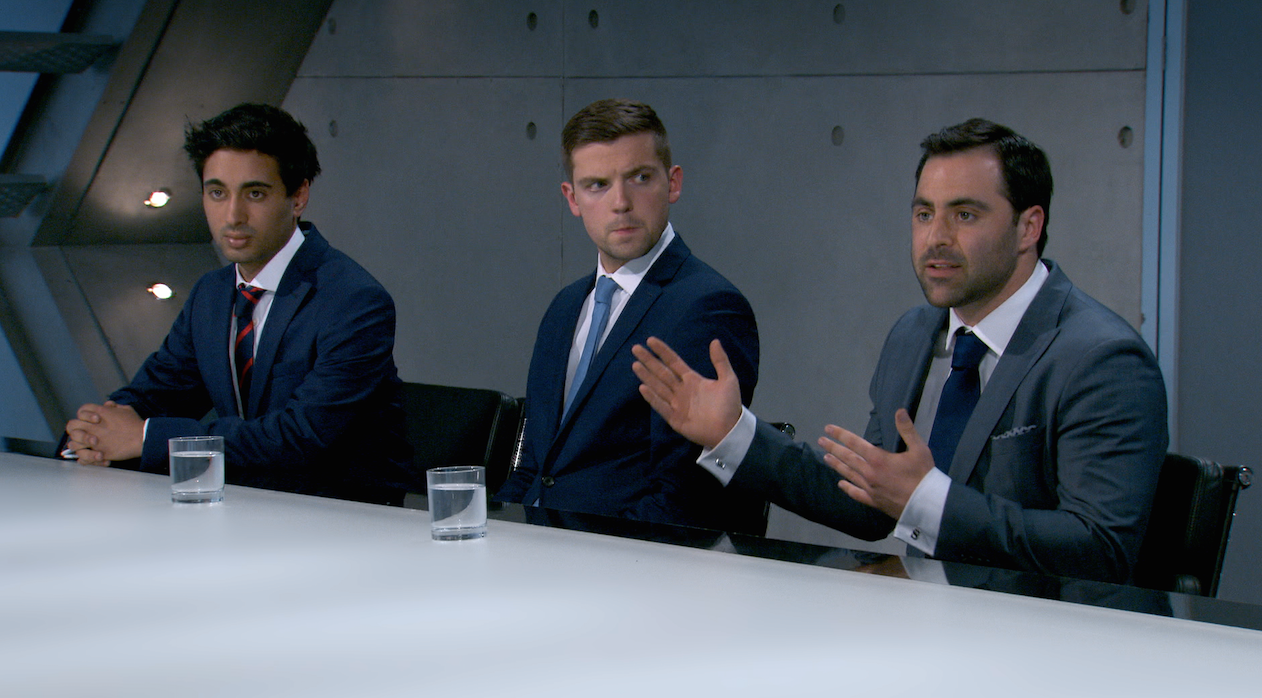 But in the end, it’s Robert and Scott who get hit in a double firing. The former is dismissed prematurely as “dead wood” even before boardroom time – the Apprentice equivalent of detention without trial. Scott leaves in a more traditional firing, and by the wild look in his eyes probably goes on to punch a wall or hijack the black cab that picks him up and mow down the next wearable tech engineer he comes across.

I’ll leave you with Robert’s baffling last words: “You can ride a canoe, but can you ride a £250,000 super luxury yacht in the South of France, Cannes?” Well, to use a more traditional metaphor, you can’t sail anything when you’re up the creek without a credible business strategy.

Her role model is Simon Cowell.

Quite quiet for the duration of the task, she popped up at the end to sternly insist the solar shoulder pads could be styled out as a stripy design, rather than the visible and cumbersome energy devices they really were. A positive thinker?

This yappy yuppie was highly unpleasant and shouty during the entire task, giving the mild, bespectacled tech developer a bit of a fright when they met during a design meeting. He’ll start to get on everyone’s nerves in future tasks.