It’s the 10th year of The Apprentice. And all through that sweaty, starchy, 110 per cent-executive-decision-making decade, it’s clear the producers have judged its loyal fans correctly. Hardly anything about the format has changed. “You’re tired!” will be the judgment of many snarky viewers as they switch over with a sigh to something more rewarding and less brimming with hollow pastiches of turgid Foxtons estate agents, but for those who love it regardless, there are 12 weeks ahead of pure, idiotic bliss.

The phrase “one hundred per cent” is heard after just nine minutes of watching the first episode, closely followed by “skill-set” at a competitive 17 minutes. “Dog-eat-dog” comes in at a disappointing 58 minutes, but we can forgive the programme makers, because everything else comfortingly follows exactly the premise of all previous series.

That wicked grizzly business bear Alan Sugar has played a wildcard this year. We now have 20 candidates to mock and despair of, rather than 16 – so there could be more than one firing in each episode.

Dedicated viewers will have witnessed the gibbering drama of a double firing before, of course, but this new factor is intended to spice up the next 12 weeks of the 10th series. As if the show needs it, with the first episode hurtling head-on into classic Apprentice pathos with lines like, “There’s no ‘I’ in ‘team’, but there’s five in ‘individual brilliance’” and “I’m going to make a fundamental decision here – we’re going to the balloon shop.” 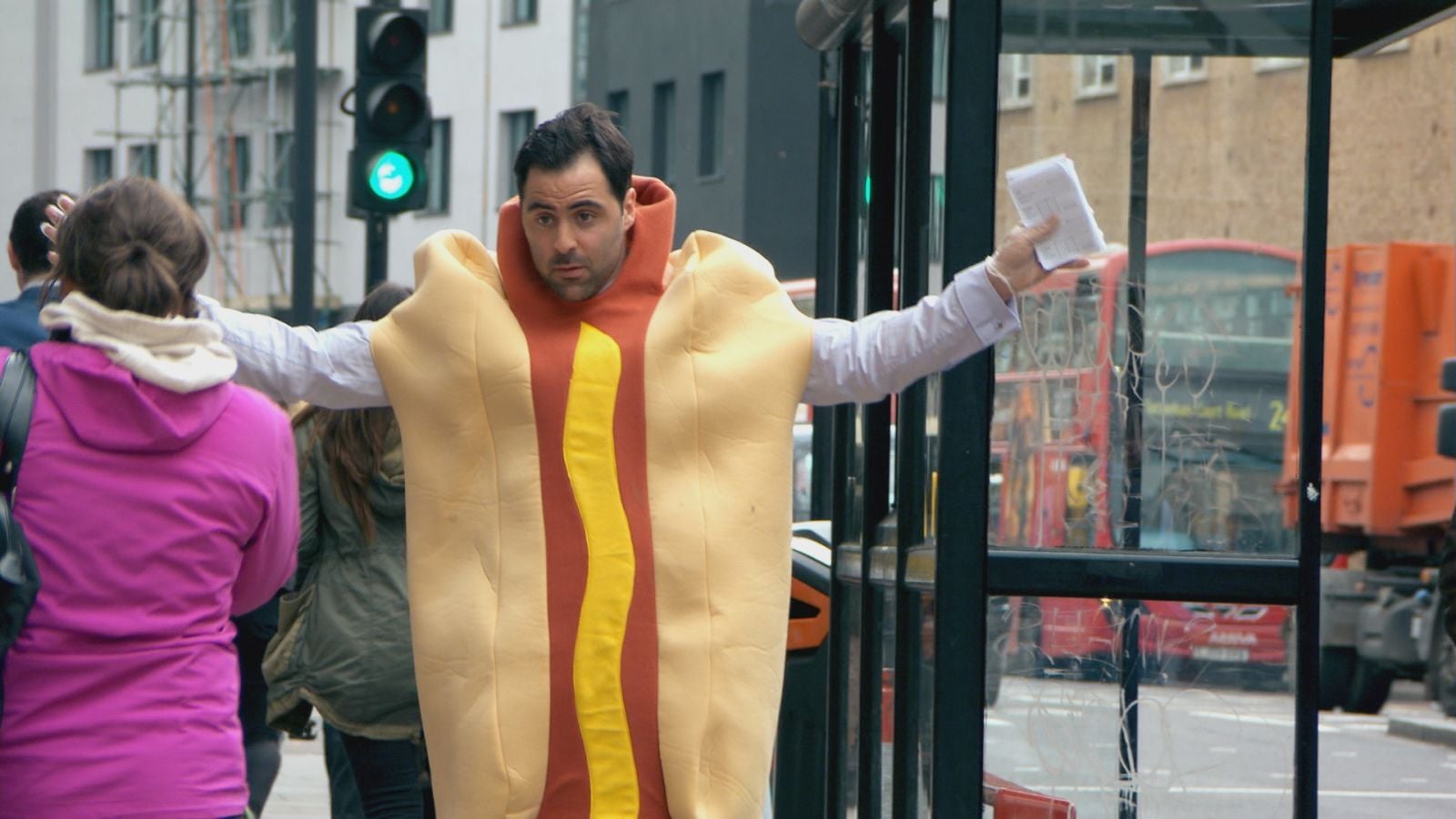 As with every opening episode of an Apprentice series, the men and women are separated into teams, welcomed into a lovely London townhouse where they will stay for the duration, woken up the next morning at 4am by a shrill telephone hurriedly answered by someone unconvincingly semi-clothed clearly with a pair of buffed brogues on out of shot, given 15 minutes to shriek playfully and deploy barbed teambuilding-related asides at each other, and then herded into power-taxis to somewhere gleaming in central London.

There’s a lot of gleaming going on in this episode. Every shot panning London is a series of the capital’s most glistening, vaguely phallic edifices, until the camera reluctantly lands on the Bridge Café ­– the losers’ suburban haunt, which gives away what everyone knows anyway: real business is executed in a hangar in West Acton.

This episode’s task is to do what is apparently “10 years of selling” – I think this is a nod to the sales tasks of the past decade on the Apprentice but I was too excited at this stage to be concentrating – in one day.

But first, the girls and boys have to choose a project manager and a team name – a pair of tasks equal in their controversy and hilarity.

When Apprentice candidates choose team names, it’s a bit like watching a circle of intensely competitive apes in tailored suits playing Articulate. They just say words. Wrong words. With conviction. The boys go for “Summit”. “It’s never been done!” cries the man who came up with it. I didn’t note down his name, as I’m pretty sure he’s likely to be tumbling off the summit soon.

Then the girls seem to inadvertently invent the branding for a pre-crash Tory online dating site by going for “Decadence”. “Playing on the word ‘decade’”, says one, hopefully. In an unprecedented intervention, Lord Sugar tells them to come up with another name for the next episode.

This follows Nick Hewer – who spends the episode looking like a quiet voice in his head is asking him what he’s doing with his life and why he hasn’t found a mild, steady slot on Radio 4 to bed into until retirement – telling the girls “decadence” smacks of “decay, decline, moral turpitude and self-indulgence”. Surely an Apprentice hopeful’s ultimate pitch for appearing on the show, amiright? 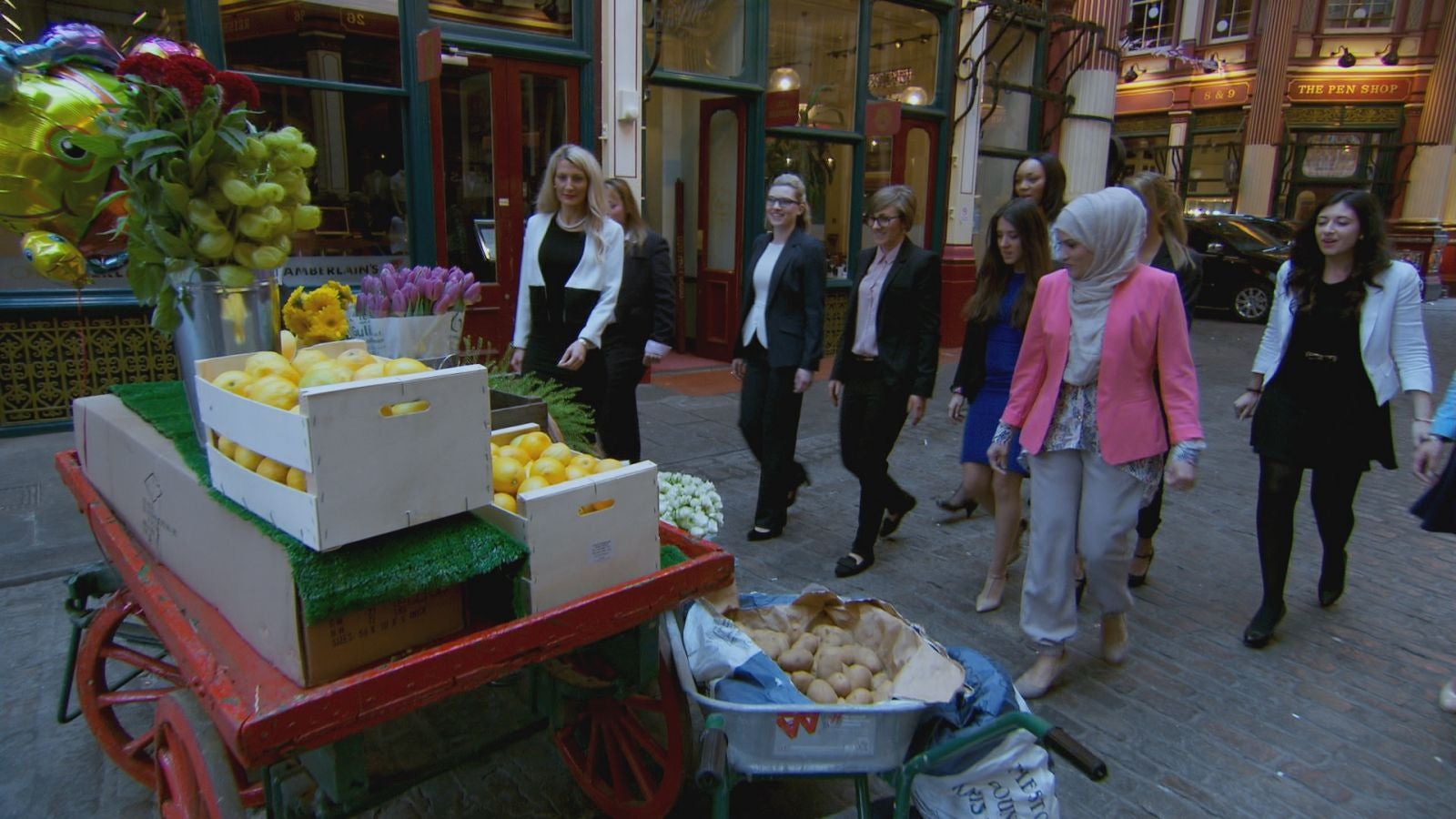 The boys’ team leader is Felipe – a former lawyer at a magic circle firm, hapless but well-meaning. It’s much worse for the girls, who opt for Sarah, who has depressingly offensive ideas about women in the workplace and chopping up citrus fruit for profit.

There follows a frenzy of suits scampering up and down the nonplussed markets of London, attempting to sell potatoes, spruce up sausages (some ill-conceived Planet Organic guacamole-purchasing occurs, pioneered by the candidate Robert who whacks out some sock-free business loafers and a boating blazer on day one), and print slogan t-shirts (“but ‘Positive Impact’ doesn’t mean anything to people!”).

The girls make a disastrous mistake by forgetting to send their sub-team (ie. group of side-lined and potentially mutinous women) off with the seed capital (ie. some cash) to the t-shirt printers. But the boys do one worse and leave their t-shirts at the printers altogether, throwing £500 away.

There is also a harrowing image, accompanied by the uniquely ominous minor chords reserved on this programme for inadequate entrepreneurs, of a solitary sponge the boys accidentally drop in the road. This doesn’t come up in the boardroom later but it still gave me chills. The girls, in contrast, inexplicably try to sell their sponges, a bucket and some toilet brushes for £250 to some hassled penguin minders at London Zoo.

Felipe’s team loses, but only by about £50. This leads to much soul-searching among the boys, with the perpetually outraged Stephen scapegoated for being a disruptive character. He’s the one who tries to sell spuds with the pitch: “It’s not going to be just a potato, it’s going to be an experience”, and is therefore inevitably saved from the boardroom, probably at the behest of some ratings-racked producers.

In the end, Chiles – the sub-team leader who left the t-shirts behind – is given Lord Sugar’s pointy finger of doom. It was a close one though, with Robert nearly getting the chop for his “arty farty” ideas about dressing up frankfurters. But he was saved too, probably because of the endless material Lord Sugar’s incessant iteration of the word “hotdog” is sure to provide Cassetteboy. 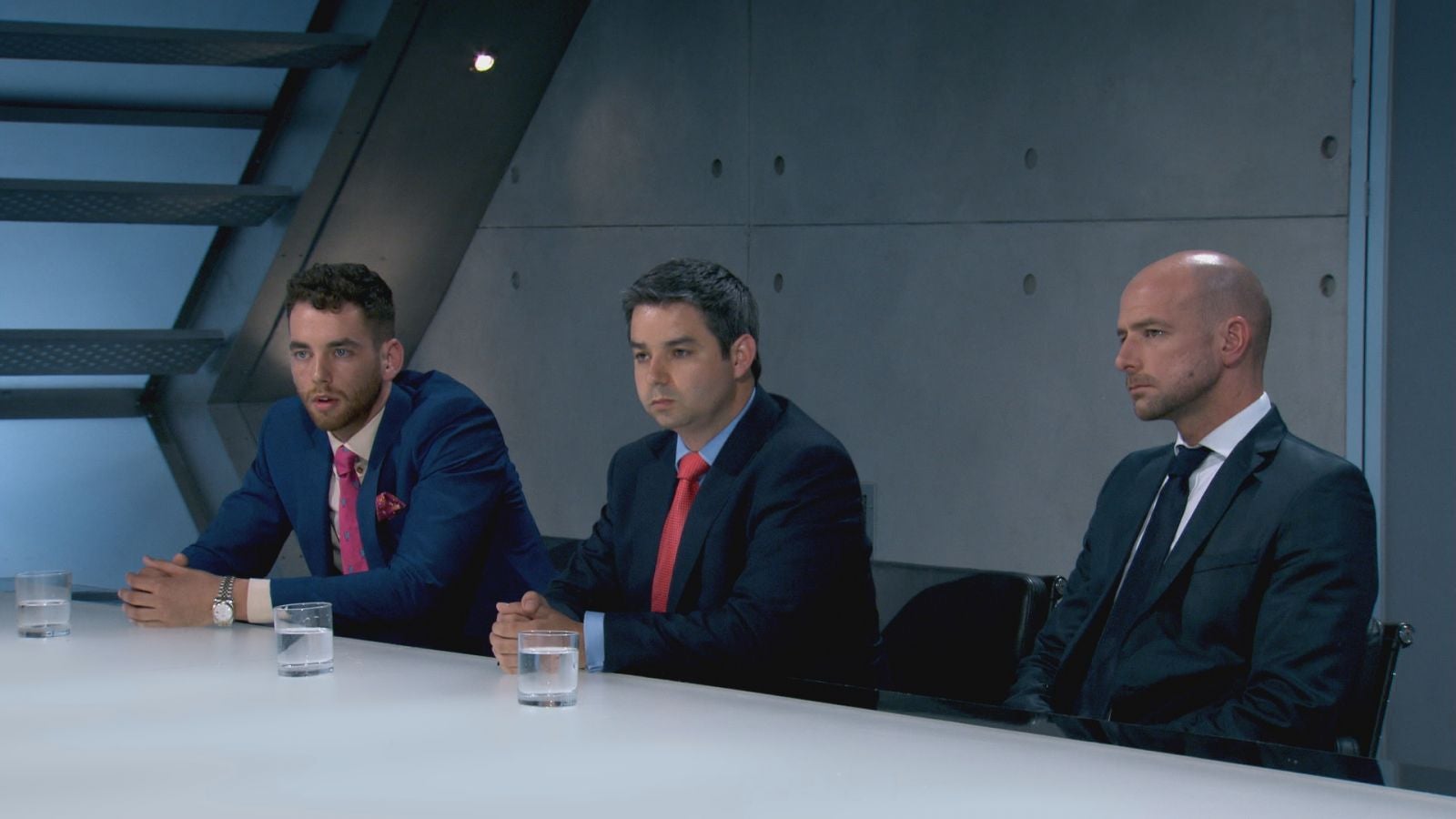 Chiles (right) is the first to be sacrificed on the altar of show-business. Photo: BBC/The Apprentice

The girls, in turn, got to spend half an hour slowly rotating in a claustrophobic pod full of 20 strangers who hate one another, as a treat for winning. Yes, Sir Al in characteristic munificence had “laid on” the London Eye’s VIP capsule for them.

With just the right cocktail of the obnoxious and talentless, and a frantic, meaningless task for them to attempt, this first episode is a reassuringly ridiculous sign of things to come. Let’s just thank Lord Sugar, poor old Nick and top TV Tory Karren Brady for laying on another series for us.

“If we went to Mars right now, I’d find a way to be excellent”.

He’s an “irritant”, according to Lord Sugar, who saved him. He was also rather unfairly scapegoated by his team. He’s sure to provide further drama, and perhaps even more florid pitches than his potato plea, in weeks to come.

She can, inevitably, sell “ice to an eskimo”.

The girls didn’t like her leadership, possibly because she kept telling them to put make-up on and hike their skirts up for the sales task, but she’s likely to cling on for a while because of the morbid fascination factor.

I’ll be blogging The Apprentice each week. Click here to follow it. The next episode is tomorrow evening, so check back on Thursday morning for the next instalment.