We’ve gone an entire week without an episode of the new series of The Apprentice, after its double blast – and double firing – when it started last Tuesday. But not to worry, patient viewer, for we are soon dragged by the overengineered lapels back into this menacing dystopia of seed capital and aggressive Prokofiev.

As is traditional, we meet the candidates at dawn, welcomed warmly back into their Highgate mansion (laid on by Lord Sugar, as if you were in any doubt) by someone frenziedly blow-drying his armpits, as the cabs of death sidle up outside.

The contestants are soon ushered inexplicably into the Royal Exchange, and told to make some scented candles. Sorry, “design a home fragrance product”. This task is all that Thomas Gresham and his fellow hard-headed merchants strived for in their bid to the City’s aldermen for taking London to its mercantile zenith: “turning melted wax into hard cash”.

Lindsay looks on regretfully, dreaming of being back in the safety of a swimming pool. Photo: BBC/The Apprentice

First, the teams are mixed up. As Lord Sugar sends some of the women over to Team Summit, I wince, expecting the usual “ladies, go and show these boys how it’s done” spiel. But it never comes. Progress at last. Karren Brady must’ve had a word. She’s probably seen David Cameron do the same thing when promoting women in his reshuffles.

Once they’ve chosen their respective project managers – “I’m obsessive about the smell of my home. I don’t mean that in a light-hearted way,” is fitness entrepreneur Katie’s winning leadership bid – both teams go on to show an incongruous depth of wax-related knowledge as they shout at one another about whether they should go for soy over paraffin.

Yet aside from that, to use a classic Apprentice mantra, can they ‘smell what sells’? Or rather, sell what smells?

“Something like vanilla or chocolate?” moots Sarah, who thinks the rich stench of food is the way to go. What about essence of pointlessly sliced lemon, Sarah?

But this idea isn’t as bad as the youthful, doe-eyed Solomon’s proposal – “Everyone says ‘I want to go back to the beach, I miss the smell’” – as he appears to target that niche market of people who enjoy their living rooms stinking of brine.

“Smells from the surf,” adds Mark, who is Australian.

“We can all smell,” boasts Bianca. 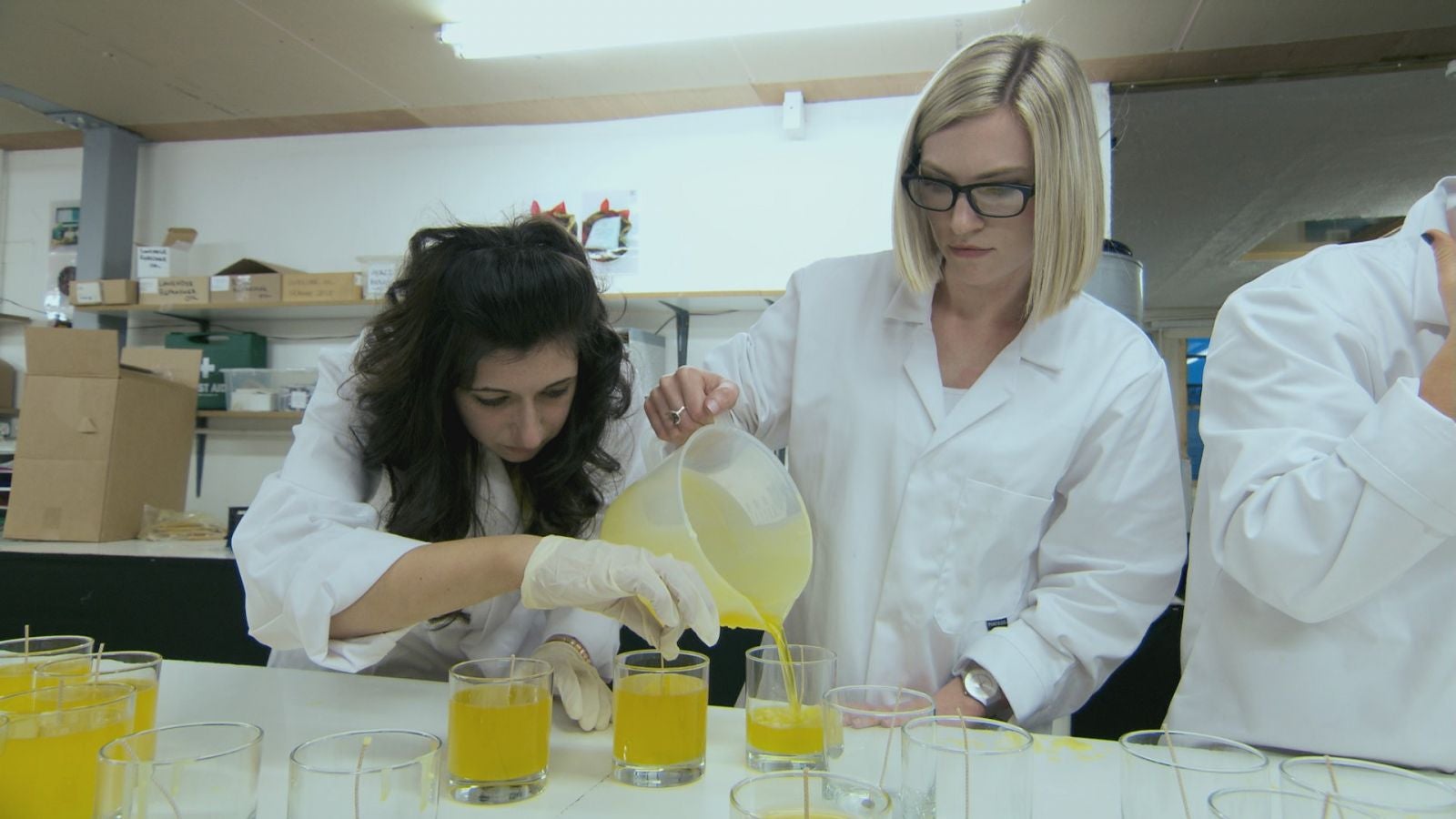 Team Summit, pioneered by the coolest, calmest accountant ever to manufacture scented candles, Roisin – “manipulate, persuade and conquer” is her motto – call their product “Beach Dreams”. The others go for “British Breeze”. How they would recreate the scent of petrol-infused heavy showers and sweaty fish and chips that the name implies remains a mystery, but the striped packaging emblazoned with faux-handwriting on the former looks passable (that’s Apprentice-passable, by the way, ie. a cheap Paul Smith pastiche. “It looks quality,” remarks Lord Sugar later on).

While they don lab coats and grapple with transforming their foreign ingredients – green tea from China, aloe vera from Africa, Thai lemongrass – into an ostensibly “British” product, team member Lindsay appears awash with a deep ennui. Yawning, and peering at a set of figures on the laboratory whiteboard, she sighs, “I just don’t understand it.”

The swimming academy owner sadly surveys the waxy mayhem before her. “I’m happy for you to do it all,” she tells her teammates with a tragic finality. “We can’t all be intelligent.”

Observing Lindsay’s decline on this episode is like watching one of those horses in the Grand National who loses its jockey but continues to run round the circuit, first happily dodging the jumps and cantering on, but quickly becoming confused and veering off the track completely. Forever with a wild, desperate look in its eyes silently screaming that the knacker’s yard, or boardroom, isn’t far off.

“I am exhausted,” she concludes.

Meanwhile, Katie’s team is hurriedly making endless batches of what start off appearing like jumbo urine samples, and end up setting as cylindrical glass tubs of lemon posset. “It’s an exclusive product,” notes Daniel, whose job in real life is running pub quizzes.

The selling begins, and Sarah tries to flog the gentrified Citronella candles to young professionals passing through a shopping centre in the City of London by doing what can only be described as a “jack-in-the-box” sales technique. She forcefully lifts the lid and asks, “would you be interested in smelling this lovely candle?” to peeved passersby.  She sells nothing. Or “nul points”, as Nick Hewer puts it, who seems to be spending this entire series sorrowfully attempting to come up with an aside as successful as his “You were all over it like a tramp on chips” triumph of 2009. 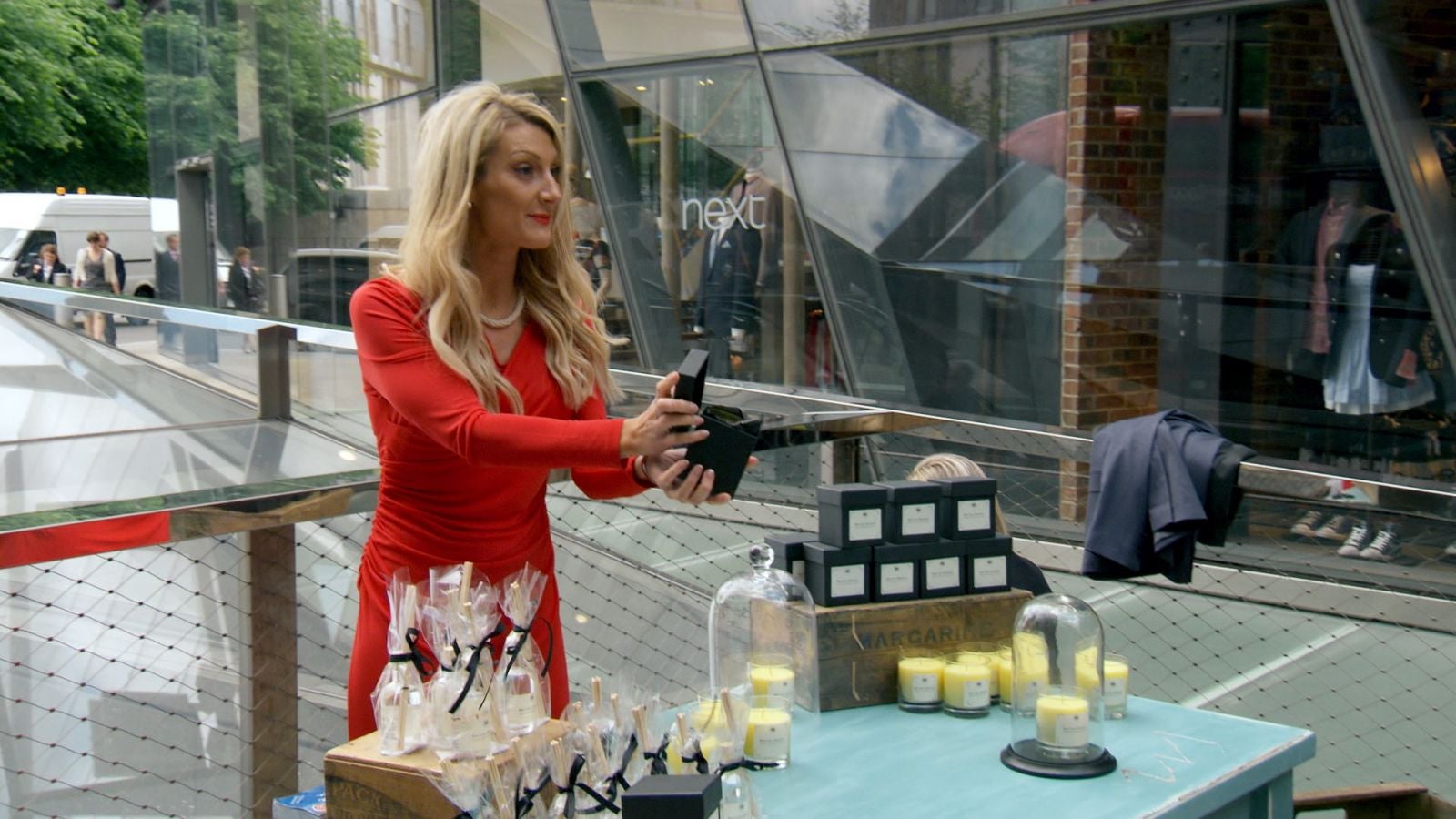 James, of Team Summit, has a different strategy. The 26-year-old, who is a “multiple business owner” (who isn’t?), applies that very specific frantic sales technique used solely by cockney fruit-sellers 20 minutes before a market closes on a Saturday afternoon in London: shifting stock for next-to-nothing. “There’s no such thing as a bad profit,” he trills, doling out their “RRP £45” candles for as little as a fiver each.

Both teams also secure some bulk sales to trade – which mainly involves waving fragranced reed diffusers around in front of fat-cat luxury hotel owners and sleazy Mahiki staff. This bit’s not particularly interesting, apart from when one team decides it’s better to sell all the reeds it has promised an upmarket hotel to a tacky giftshop on the cheap.

It turns out Roisin’s troops lose by the price of one candle – £14.77 – and therefore Team Tenacity are given a so-called treat in what looks like the most awkward group hot-tub experience since the Big Brother house came into existence. 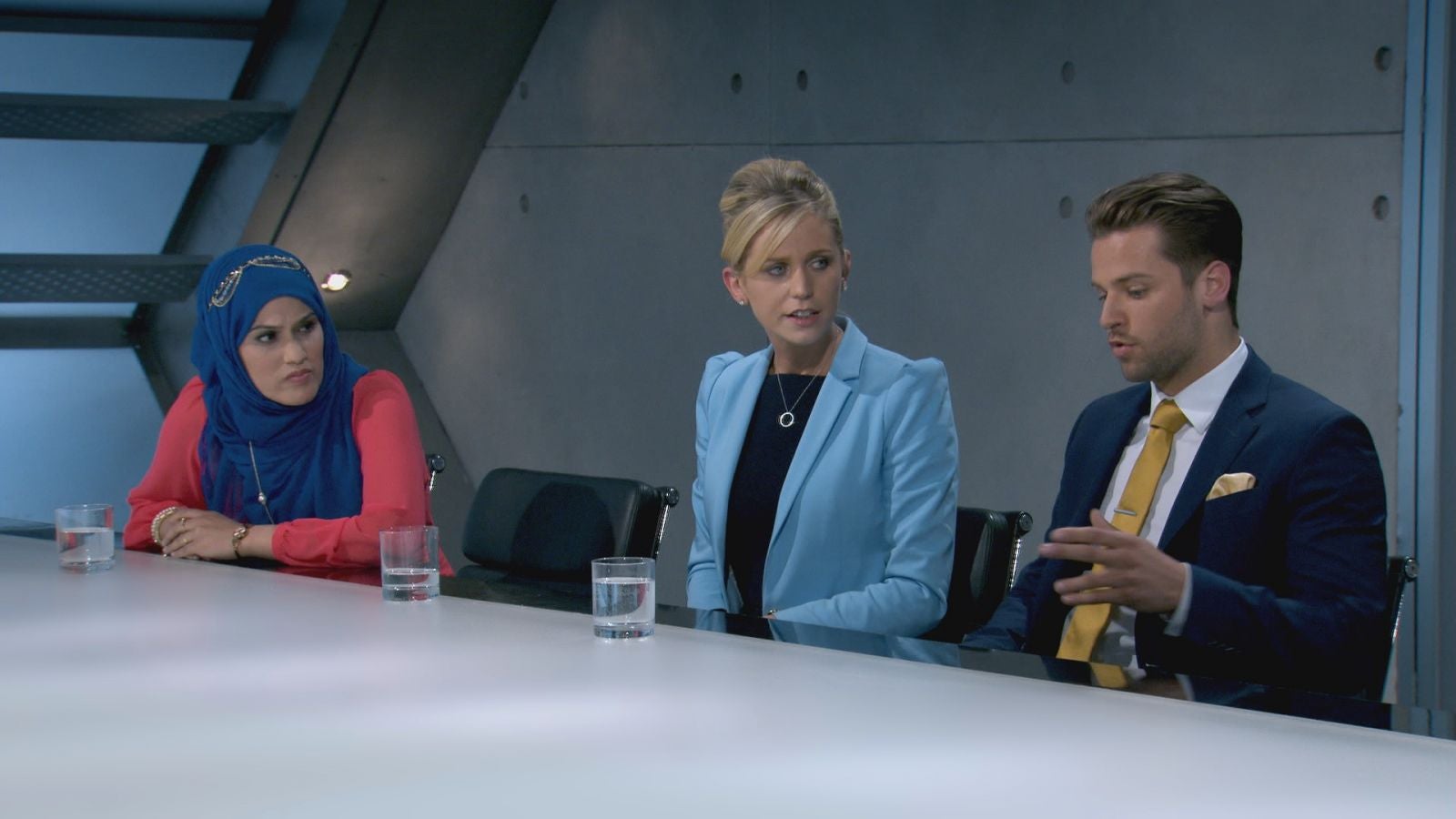 Nurun is from Peterborough and James is hungry. Photo: BBC/The Apprentice

The drastic outcome of selling one candle too few leads to one of the bleakest dismissals in recent Apprentice history. Nurun, whose main defence seems somehow to be “I’m from Peterborough here”, is the last to go, and leaves without much fuss. But the most harrowing scene is one in which Lindsay seems to be delivering her own eulogy. “I didn’t do a very good job at selling,” she murmurs, as a solo cello plays its mournful dirge in the background. “It’s better if I stick to swimming.”

So Lord Sugar, slipping in his gruffly compassionate “it is with regret” ad lib, sends her off home to get back to weaving her stoic breaststroke through life.

Surely this series’ most prominent idiot so far. He did an impromptu robot dance/stretch in the boardroom. “What are you doing?” snapped Lord Sugar, laying into him, before conceding, “you’re a young man.” “That’s right,” he panted eagerly in reply. “I’m the most passionate, most hungry person . . .  I’ve got that much hunger.” Just eat a lemon posset and shut up then, James.

“The future belongs to those who believe in the beauty of their dreams.”

This 23-year-old graduate spent most of this episode looking quite a lot like she was going to vomit. She was the one who told a buyer that wonky labels on the candles’ packaging was fine if you looked at them “from a distance”. Worth watching out for anything else she spews in future episodes.

“I have no bad business skills.”

Mark, whose one defining characteristic seems to be Being Australian, doesn’t do much other than bark meaningless sentences at people. “You never make decisive decisions,” was his contribution this week. Another passenger for Nick or Karren to rat out?