Alan Sugar has a smartphone. He shows it to his intrigued candidates (there are still 15 left. Yeah. Fifteen. More than Jesus had disciples). He informs them that people today prefer to be entertained by their smartphones, like the one he’s toting in an oddly pointless flash of product placement (it’s a Samsung), to attending Victorian music halls in the East End, such as the one where they’re gathered for the beginning of the show.

Gosh, the world must change fast in the narrowed eyes of our lordly, sugary Deus ex machina. One minute you’re whirling your new bird round ol’ Wilton’s to Tararaboomdeay! in the late 19th century, and the next you’re sitting there with your fancy new phone abusing Piers Morgan on Twitter.

So yes, it’s a web task. For people who still call it the web. We’ve already had wearable tech, when the teams discovered putting LEDs on things, and now it’s time to make an online video channel, as the contestants are introduced to YouTube. “It translates into hard cash,” says Lord Sugar hungrily. No one tell him about bitcoin.

Young Solomon, with his crooked smile and artfully mussed hair, takes the lead for Team Summit. “I’m very, very up for it,” he grins. He’s a tech person of some sort. I think he invented an app, but I’d have to Google it and that would mean surfing the web – the dial-up on my Amstrad CPC 464plus is really playing up at the moment. His rival is fellow young ‘un Ella Jade, who takes control of Team Tenacity. “I am who I am. I’m Ella Jade,” says Ella Jade. 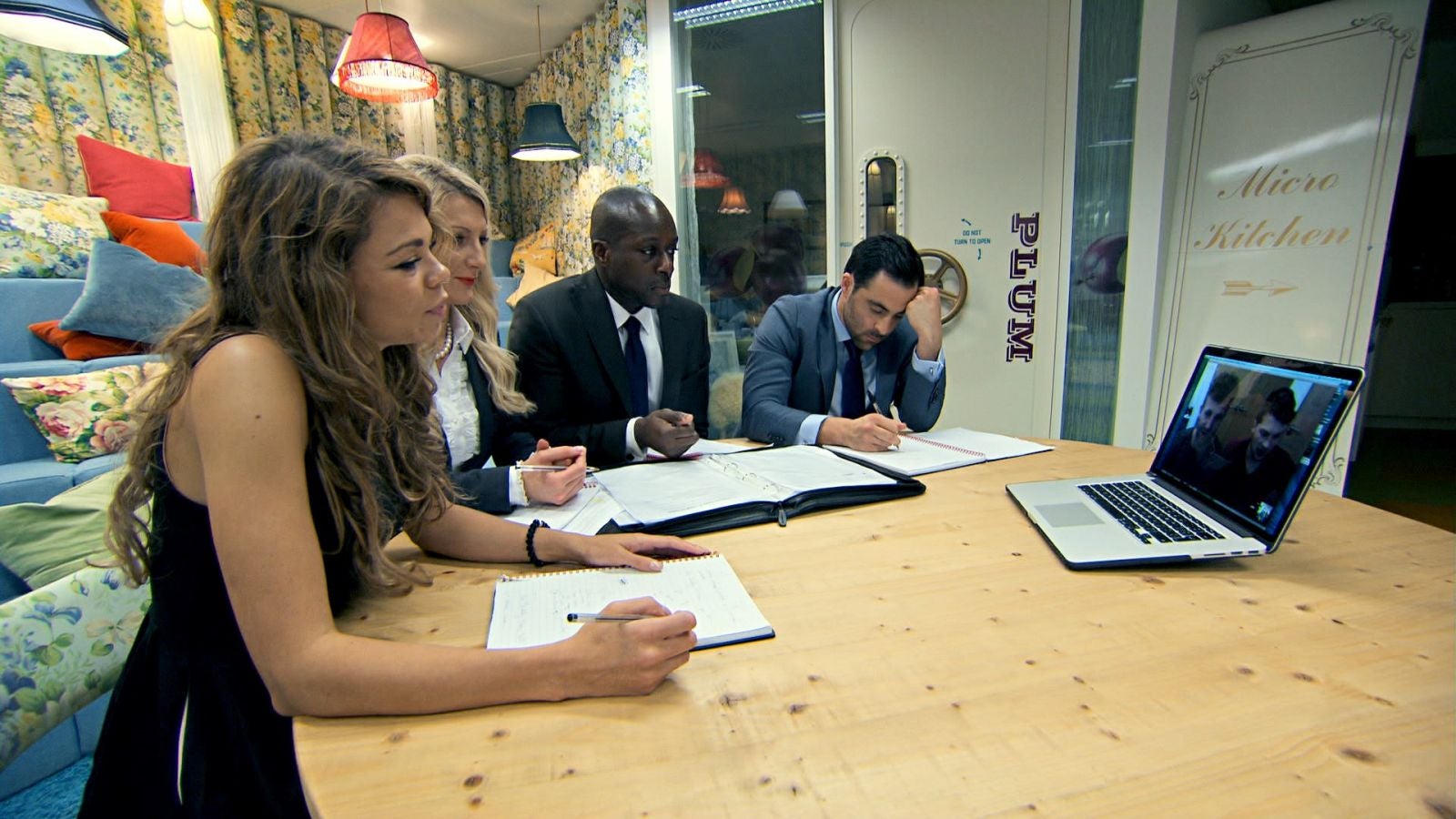 Lord Sugar commands that each team invents viral video content for their channels that will appear online for 48 hours. Whoever gets the most views in that time wins. Duly, they proceed to create the least funny trailers since Nick Clegg’s Sorry video pre-Autotune.

Tenacity decides that it would be worth attempting to entertain people. “I’m thinking in entertainment funny,” says Ella Jade, clicking her fingers in a supposedly dynamic manner. With the help of unassuming lawyer and shameless father Felipe, they come up with “Fat Daddy Fitness Hell”. This concept mainly comprises amateur footage of dead-behind-the-eyes fitness instructors shouting unconvincingly at Felipe, who is in a bad gym kit, slightly dying.

“Fat Daddy Felipe gets put through his paces,” says a narrator, nearing the snark levels of Come Dine With Me’s voiceover.

“I am Felipe, and I am a fat daddy,” says Felipe, silently putting his top legal brain to the task of finding a loophole to get him out of this degrading show and back to his cozy office – which is really based in the City. Where the Gherkin is an actual thing, and not just a figment of stock footage’s imagination. 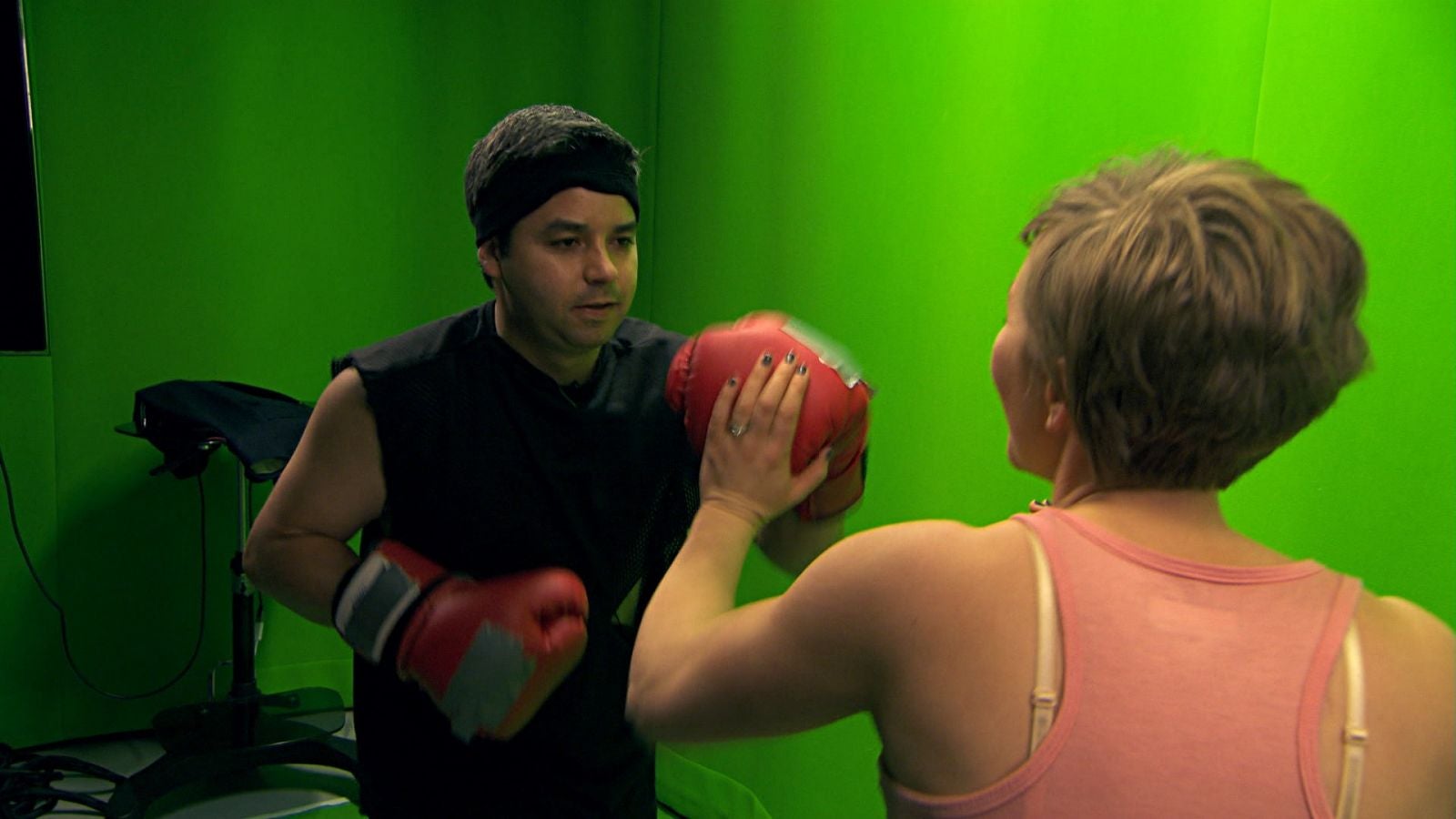 A degrading task for Felipe, who at least gets a free work-out. Photo: BBC/The Apprentice

Later in the programme, the team gathers together to watch the complete trailer back, stony-faced. It’s a moment of profound, intense sadness in an otherwise upbeat episode.

If that sounds bad, you’ll have to Edit>Undo their competitors’ footage from your memory pretty quickly. Solomon’s team goes for the idea of “Dare to Dine”. His aim is to “bring Lord Sugar into the 21st century”, and what better way to do that than dress your fellow team members up as hammy chefs and have them flick flour at each other while turning pleadingly to camera and yelling “dare to dine?!” in strangled voices?

Multiple business owner and morontrepreneur James is the “clown” character, always messing up the kitchen – silly billy! – while Roisin is the straight one, attempting some sensible dialogue about cooking. “Because we need a girl in the video,” Solomon kindly explains. “She’s like the serious one, and I’m like the funny, childish one,” adds James, as humanity takes a mournful step backwards.

I don’t really understand what “Dare to Dine” is. It involves rubber chickens being thrown around, tiresome eating contests, and James asserting, “I’m very professional,” off-set, while wearing a big comedy chef’s hat with flour on his nose. 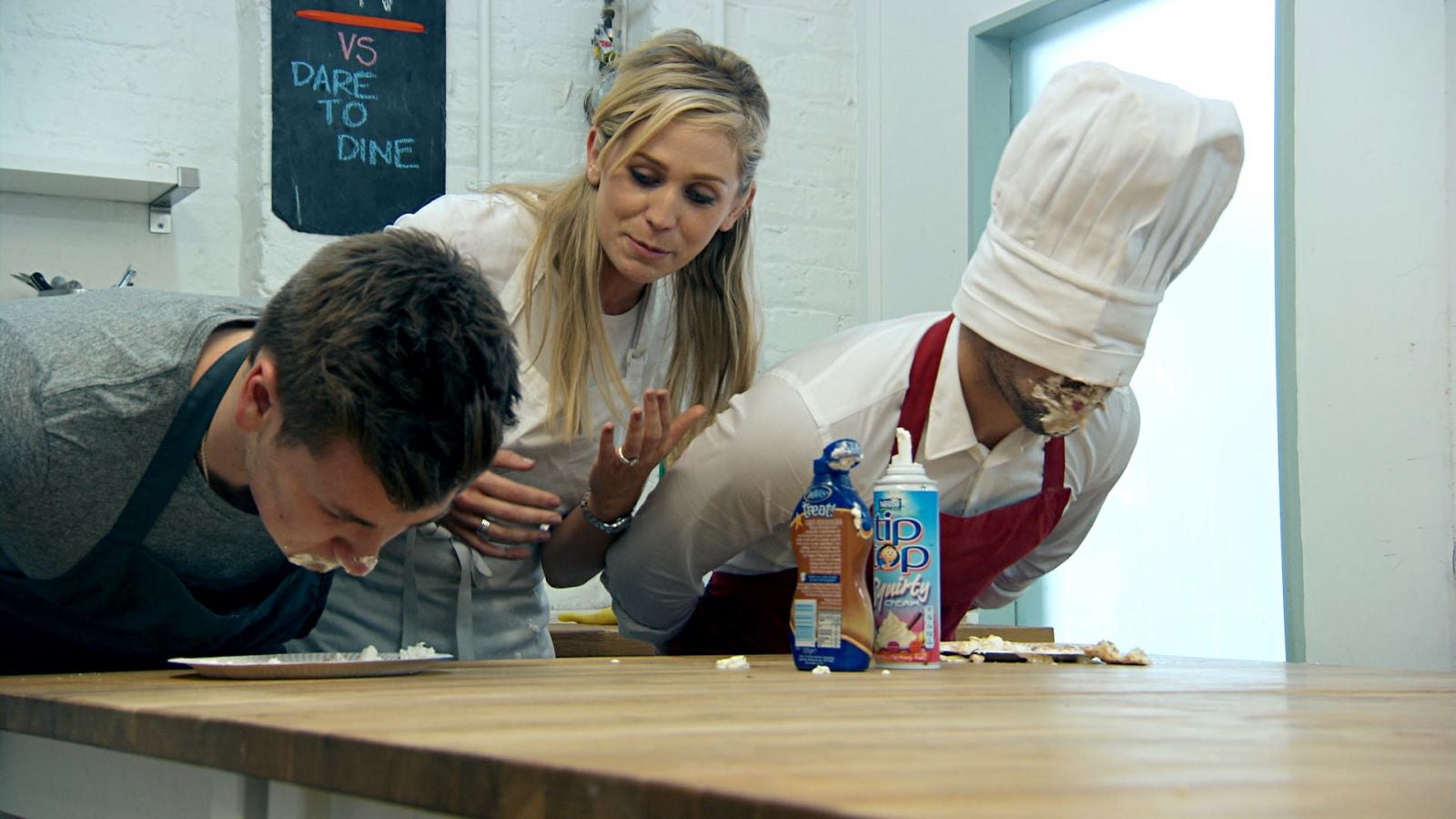 The next step in the candidates’ harrowing journey to viral video-making is to choose YouTube stars as “collaborators” (revolutionary language for the digital revolution, eh guys?), who will help them pick up hits for their videos. Each team has embarrassing Skype chats with beardy, handsome young men in thick-rimmed glasses, and each choose their dream collaborator. “Virtual high-fives!” ensue.

Sarah, she of warm pocket and cold sexism fame, has a tough old time throughout this episode. Clearly unable to trust her with ordinary Apprentice team responsibilities, Tenacity has given her a suspiciously vague task: “the time”. But Sarah has trouble controlling the Fourth Dimension, coming under fire when the team forgets to put a title and description on their trailer by the deadline: “I’ve been doing the timings the whole time,” she retorts. Meta.

There follows a dreadfully exciting brush with new media, as each team has to pitch its video channel to BuzzFeed – or, in Lord Sugar’s words, “the digital news people” – in the hope the site will host their efforts. The BuzzFeed panel, their casual skinny open-necked shirts and Converse juxtaposing pleasingly with our poor candidates’ scratchy Burton sale numbers, do an impressive collective poker face. “I didn’t find it that funny,” one ventures, after watching “Dare to Dine”. “Kill James,” another softly writes.

Steven gives an incredibly rambling pitch for “Fat Daddy”, which involves the key ideas that “the hardest part of a hundred-mile journey is the first step” and “we’re going to be extremely informative”. The expression of untold horror on his team members’ faces could fit well in BuzzFeed’s 44 Medieval Beasts That Cannot Even Handle It Right Now listicle.

Needless to say, BuzzFeed hosts neither of the teams’ videos, even though Daniel – of the “Fat Daddy” creators – insists, “I genuinely believe they liked the concept; our only problem could be the offensive part.” 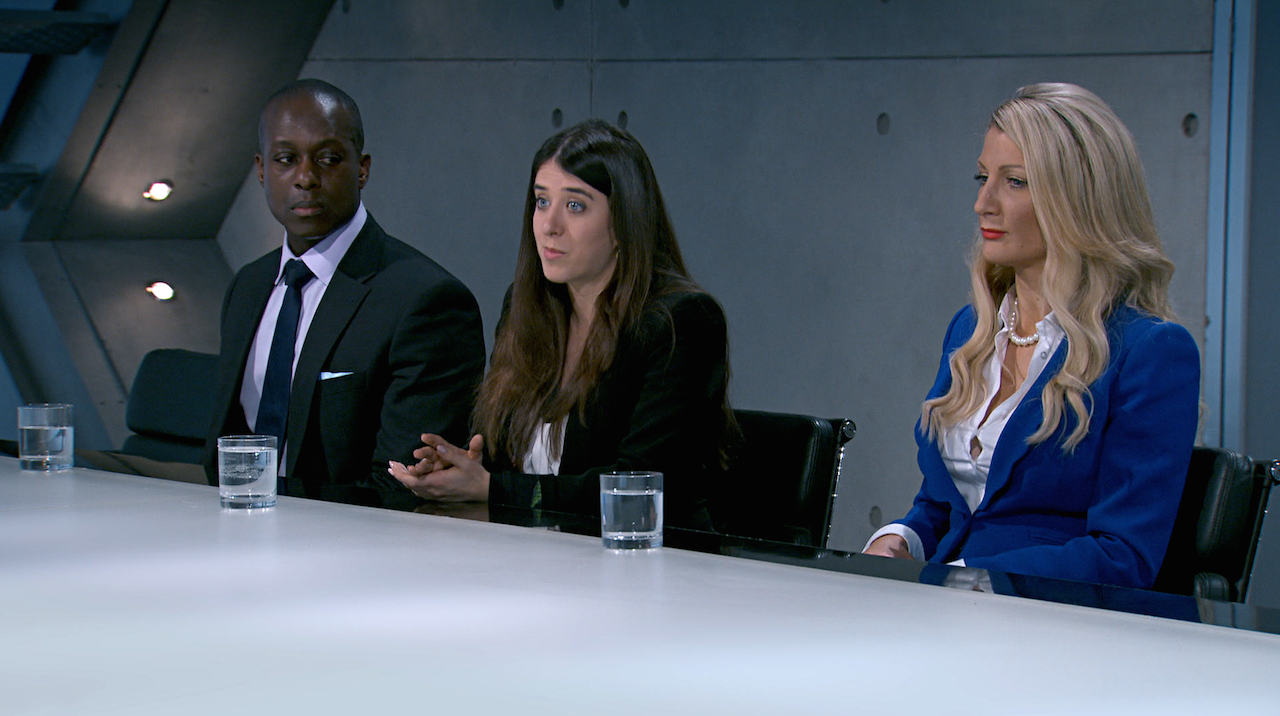 “Guys, shall we share a cab home?” Photo: BBC/The Apprentice

Along comes the boardroom, where Lord Sugar redundantly tells his contestants: “This is a 21st-century task, you’re all young people; this should be right up your alley.”

He generously tells Felipe he’s “as fat as James is funny”, and then Karen and Nick reveal the scores showing Summit beat Tenacity by 3,532 views to 3,314. So the winning team is deemed to have gone “viral”, and is hence sent to some hot volcanic waters in Iceland, safely out of WiFi’s way.

Then Lord Sugar pulls out his all-powerful finger and fires three of the suckers. Ella Jade’s defence – that she was aiming “to utilize the essence of Felipe’s wittiness” – doesn’t wash, and her dismissal ends messily with her refusing to leave the boardroom and pleading with the boss: “Lord Sugar, I promise you, I promise you…”. Steven obviously goes. And Sarah too is sacked, because Lord Sugar has noticed “they always make you the timekeeper”. Maybe she should invest in some wearable tech: a watch.

After this dramatic denouement, all that is left for stunned viewers is to hope these three chaotic candidates will be made to share a cab home. Imagine the conversation. And Sarah would never be able to get a handle on the meter.

As far as I can see, Jemma does nothing, but gets all the treats by being in the winning team. You can tell by that small glint of triumph in her eye as she toasts a glass of champagne in Iceland’s hot springs with the rest of those mugs who actually take part in the tasks.

“Out of every 10 people I walk past on the street I think I’m better looking than nine of them.”

The ultimate Apprentice passenger: a passenger who is so much of a passenger that he doesn’t even get outed as a passenger. Will he be found out next week?

“I’ve sold bags of material to people who can’t sew.”

Usually whiny and negative, this unlikely 27-year-old doesn’t have many redeeming qualities. His moaning could put him in conflict with teammates sooner or later. Then it’ll be back to pub quizzes for Daniel.