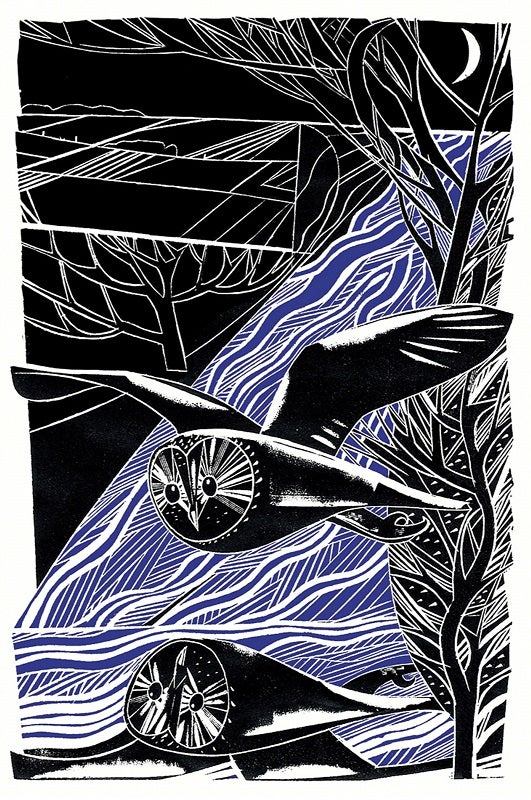 A Gibbs woodcut for the book. © Jonathan Gibbs

What great nature writing does, in a way no number of BBC documentaries can, is to make us look anew at what we take for granted, opening our bare eyes to what was there all along. Words, far more effectively than the highest-definition film, can bring us abruptly, even disconcertingly, into the moment of witness: that point when time telescopes, and so, too, does the distance between our physical and metaphysical selves and whatever crawling, flying, swimming or slithering aspect of Creation has deigned to indulge our desire for communion.

Mark Cocker is an established adept in this time-intensive art, as his meditation Crow Country (2007) confirmed. In Claxton he assembles 12 years’ of field notes, previously published in anthologies and newspapers. As he remarks, “of all my books this has taken the longest to write”. And like Gilbert White, whose lifetime of recording resulted in something that exceeded, as a creative whole, the sum of its calendrical parts, Claxton has a gripping momentum of its own.

That is partly due to the migratory and seasonal dalliances of the birds and beasts and bugs and botany that constitute Cocker’s cast. They troop through the days and months of the year – mostly observed in the lanes and fields near his Norfolk home, close to the River Yare – constantly reinventing themselves: shedding skin, growing feathers, consuming and pursuing one another in a continual reiteration of the same lives that have persisted, in the same cycles, for millennia.

I won’t look at a blackberry bush in the same way again after Cocker’s evocation of these arching briar communities, so common, yet so impenetrable, no human eye ever sees what is going on in that dark tangle. Crickets, moths, flies, wasps and warblers turn the shrubs into microcosmic, prickly planets. Indeed, blackberries themselves break down into no fewer than 400 “micro-species”, on which we, too, have depended since time immemorial. As he writes, “A Neolithic man pulled from the submerged clays on the Essex coast was found to have blackberry seeds still in his stomach.”

That sense of temporal and physical fluidity courses through Claxton, synoptically expanding on an interspecies dependency, blurring biological and cultural boundaries. Our associative love of swallows and swifts – the hirundines in whose description Cocker particularly delights – is probably due to our ancestors having shared their caves with these scimitar-winged birds. Now they nest in our eaves and still seem to be family gods. In another entry, for 2 June 2008, Cocker writes of a “swift-sculpted” landscape, “the wings shearing out waste, reaving the valley of all excess” – echoing Aldo Leopold’s observation about how birds imply a landscape. Not that they’re a particularly rural phenomenon. Their eerie black shapes can be seen in urban skies, soaring over semi-detached streets for a brief few months of summer like little airborne demons, more bat than bird.

It takes a writer of Cocker’s investment to see that the chain of events which results in their migrations – like the swallows that swirled over my head last week as I swam in the Solent – is in fact just a transfer of energy, from the sun, to the plants on which the insects feed, which thus fuel the birds. It’s a logical point, but made ecstatic in his poetic prose. Who else could see common blackbirds as “a kind of English history all by themselves”, or the ash tree as its “limbs unfold with the quality of antlers”? This is a non-digital world, where the only web that matters is woven by “this year’s arachnid dynasty”. He makes us look longer and harder, to see “more of ourselves”. Little wonder that Henry David Thoreau, who removed himself from the world in order to see it better, is often quoted in Claxton.

Initially I resisted the economy of this book. It felt too episodic, even repetitive. I longed for Cocker to stretch his wings and slip the bonds of deadline-demanding newspaper columns. Thus squashed together, a writer’s journalism highlights his or her tics, such as Cocker’s favourite adjectives, “vast”, “sweet” and “recessional”. I wanted a longer narrative. But then I caught the work’s rhythm, as though falling into stride behind Cocker on one of his daily walks – a cumulative journey elegantly signposted by Jonathan Gibbs’s beautiful woodcuts, which open each month’s entries.

Like this season, with the swallows’ departure and the lowering sun and sense of lost memories, there is an inbuilt melancholy to Claxton as it moves inexorably towards the year’s end. The cyclicality of the natural world challenges our mortality, and our hubris. In turn, we anthropomorphise it because of what it stirs in us. Cocker quotes Aldous Huxley, who reckoned that “this sense of communion with our fellow creatures had given rise to half the poetry in the English canon”. Claxton certainly makes its modest contribution to that oeuvre. And if a short-eared owl’s cry is “a sound before language – a raw simple poem about life and need”, then so is this glorious book.

Philip Hoare’s “The Sea Inside” is published by Fourth Estate (£9.99)