London’s Barbican Centre has announced that its latest exhibition – “Exhibit B” – has been cancelled because of the “extreme nature” of protests against its subject: actors of African descent chained and half-naked, in cages.

The performance, which was due to run until 27 September, draws on the “human zoos” and ethnographic displays of the late 19th and early 20th centuries – a period of time where African people were seen as less than human by Europeans, who had pseudoscientific theories of race that justified white supremacy. The artist, South African Brett Bailey, has described it as “a human installation on imperialism in Africa and racism” which aimed to explore the exploitation of the continent’s resources, like ivory, rubber and timber. Visitors would have entered the show one-by-one, and watched the actors – labelled “the exhibits” – standing rigid in cages, with specific instructions to maintain eye contact with each person as they looked on.

The nature of the show caused uproar, with an online petition started by Sara Myers calling for it to be cancelled receiving more than 23,000 signatures. She described “Exhibit B” as the creation of literal “human zoos at the expense of black people”:

I campaign and work with my community to try to breakdown the stereotypes that black people have to struggle against in society on a daily basis. I want my children to grow up in a world where the barbaric things that happened to their ancestors are a thing of the past. We have come a long way since the days of the grotesque human zoo – we should not be taking steps back now.”

After a long campaign, a large protest took place outside the Barbican’s Vaults on the opening night, 23 September. The Vaults are located beneath Waterloo station, inside of an underpass dubbed “the graffiti tunnel”. From afar, the protest could have been mistaken for a celebration of some sort. There was dancing, singing and drumming, which was loud yet also welcoming. It echoed through the underpass, almost drowning the sound of police sirens in the distance.

I approached a protester to ask whether I was in the right place for “Exhibit B”. “Yes, but they’ll only let you in if you’re in chains”, she told me solemnly and straight-faced.

The entrance was hardly visible as protesters surrounded it. All that could be seen was an eerie amber glow from inside, escaping through an arched opening above the front door. The crowd included people of all ages and nationalities wearing colourful whistles round their necks, and holding banners saying “Boycott” and “Caged Black People Is Not Art”. 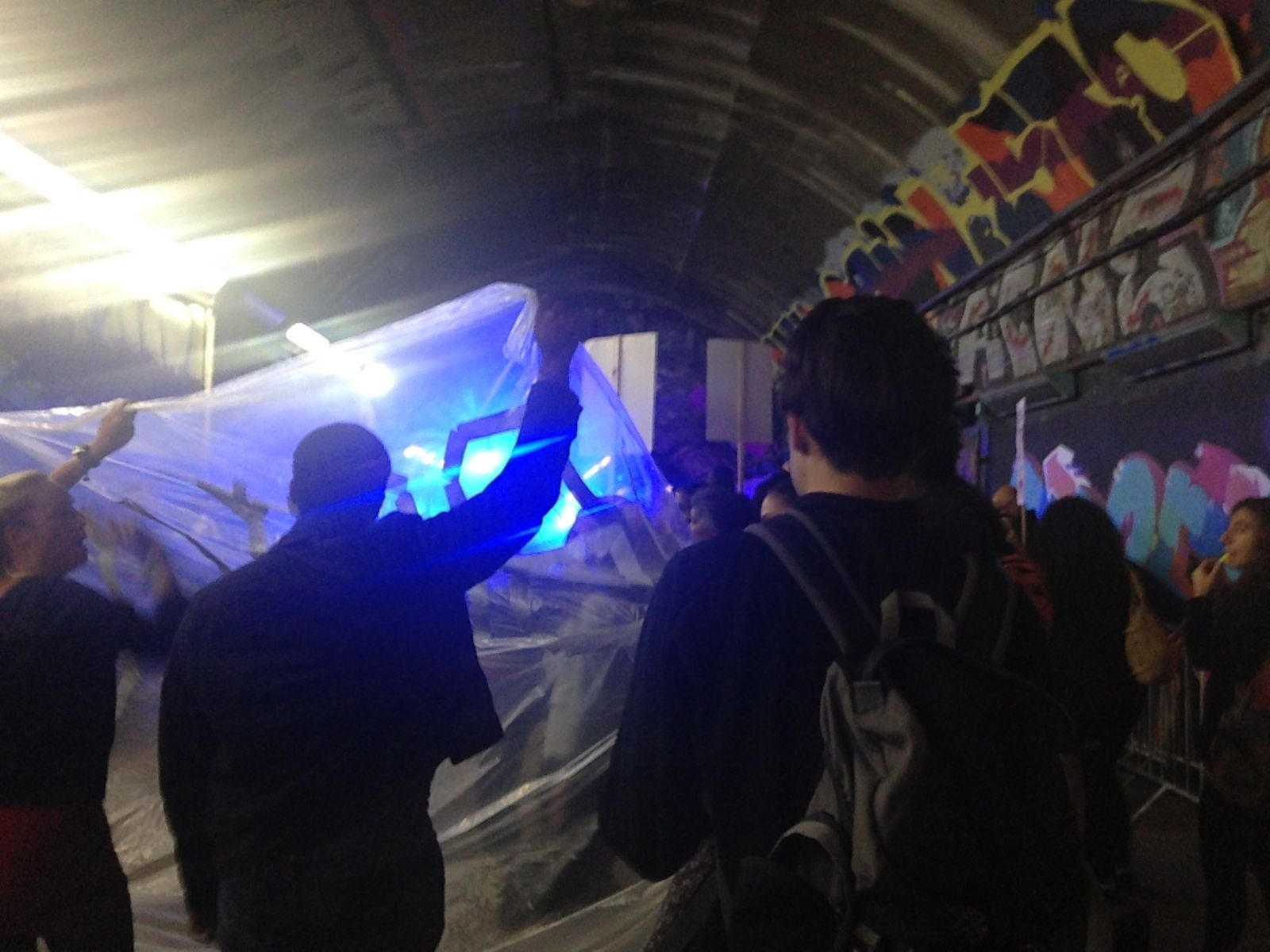 The protesters, around a 100 in number, were completely peaceful – yet the underpass remained illuminated by the flickering blue lights of what appeared to be a disproportionately large number of parked police vans.

“Who are they protecting?” a protester asked me. “It’s not us.” In her hand, she held a large poster displaying a striking illustration of three Nubian queens. “This is the type of art I want my daughters to be inspired by, not black people in cages,” she said.

After this, the opening night performance was cancelled – with a statement from management claiming that the organisation “could not guarantee the safety of performers, audiences and staff”, despite no evidence that the protesters were ever anything but peaceful. And, yesterday, the Barbican announced that the entire run of “Exhibit B” has been cancelled:

We find it profoundly troubling that such methods have been used to silence artists and performers and that audiences have been denied the opportunity to see this important work. Exhibit B raises, in a serious and responsible manner, issues about racism; it has previously been shown in 12 cities, involved 150 performers and been seen by around 25,000 people with the responses from participants, audiences and critics alike being overwhelmingly positive.”

It deplores what it perceives as the “silencing of artists”, and warns of consequences for “freedom of expression”. However, protesters outside the Vaults at the launch were clear that they didn’t regard this as an issue of free speech.

Poet Anthony Anaxagorou – one of many protesters who have been actively involved with previous marches and campaigns against “Exhibit B” – told me:

This is not a clever medium from which to educate people  it’s in fact both antithetical and offensive. An arrogant and conceited attempt by a small group of privileged people who appear to be far removed from the legitimate grievances of those they are trying to represent.

Bailey has very clearly demonstrated a complete disregard for the people whose historic experience he is attempting to articulate. To dismiss the 23,000 people who signed the petition calling for the show to be banned, the majority of those being black, is a clear example of this.”

Although Bailey has said that “Exhibit B is not a piece about black histories made for white audiences”, many were unconvinced.

“If that’s really the case then why is there no focus on the white people who initially curated these human zoos, zoos that existed even up until the 1950s?” Anaxagorou demanded. “Why is there no glaring spotlight placed on the bigoted Europeans who subordinated Africans in this horrendous way?” 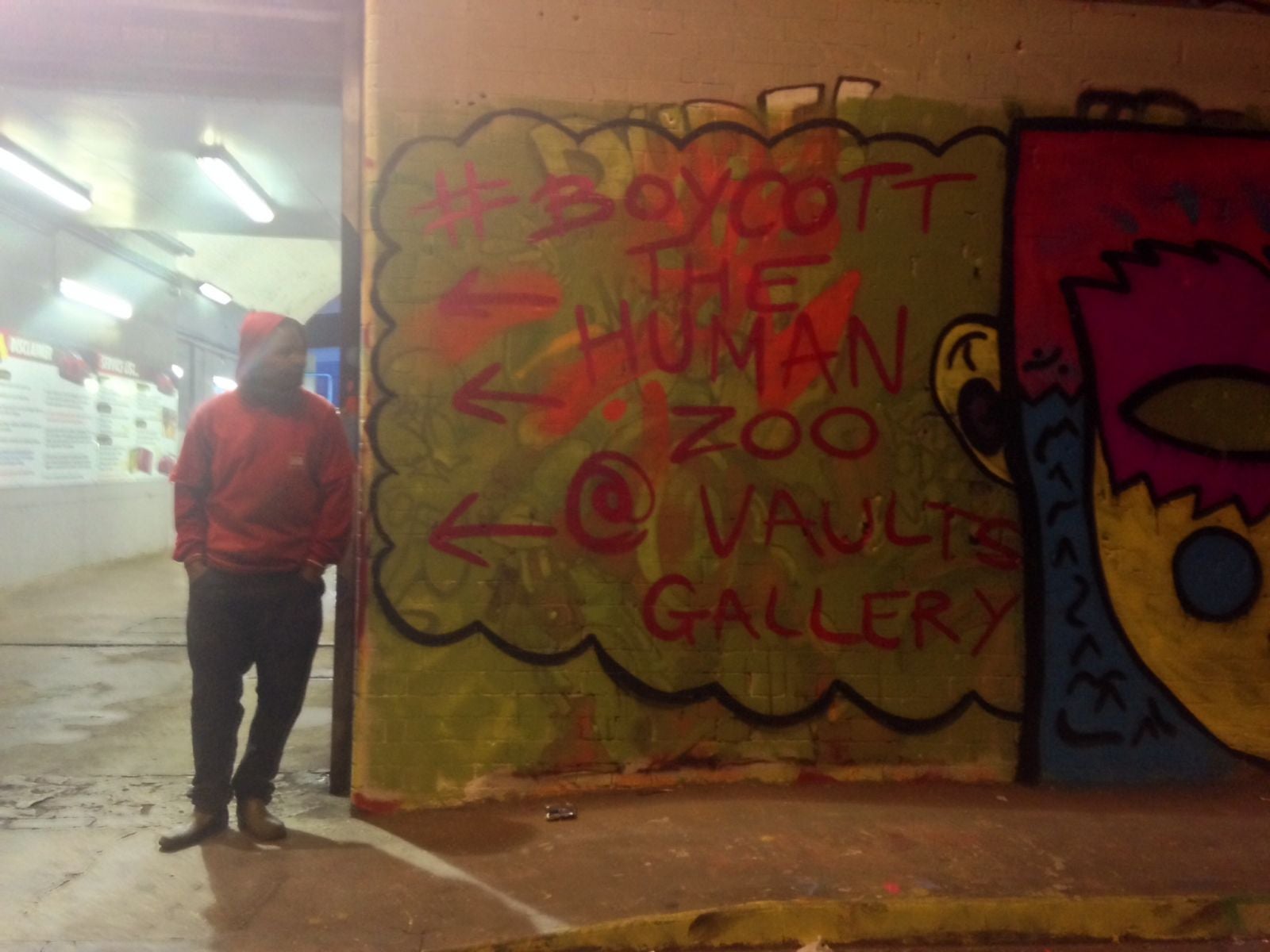 However, as Lemn Sissay (another poet) recently blogged, there are those who believe that the story of slavery is “part of the collective consciousness of humanity”, and that it’s essential to remind people of it – it “must be told by all and remembered by all”.

Are the protestors punishing Brett Bailey for telling the story because he is a white man? Are we saying that only certain people have the right to tell certain stories? Are we only allowed to tell stories that lie directly within our own experience? That sounds like a brilliant way to segregate audience and artists further. I guess that would mean no black person could ever tackle Arthur Miller, Edward Bond, Chekhov, or Ibsen.”

Most of those present at the opening, however, did not share this sentiment.

For Latif, that also may be the key issue:

Diversity of art, artists and audiences is key to the future of British theatre, and we must all keep the pressure on institutions to keep moving in that direction.

Maybe this should be a war cry to all artists – whatever their skin colour – that this subject can and should be examined. We need to talk about it. All art is inconclusive exploration. “Exhibit B” could have been a real jumping off point for a much bigger discussion about making more and more work for black audiences. It might have inspired future generations of artists of all colours to keep asking big questions, to keep pushing, to keep provoking. It could have been the beginning of something.”

All photos by the author.