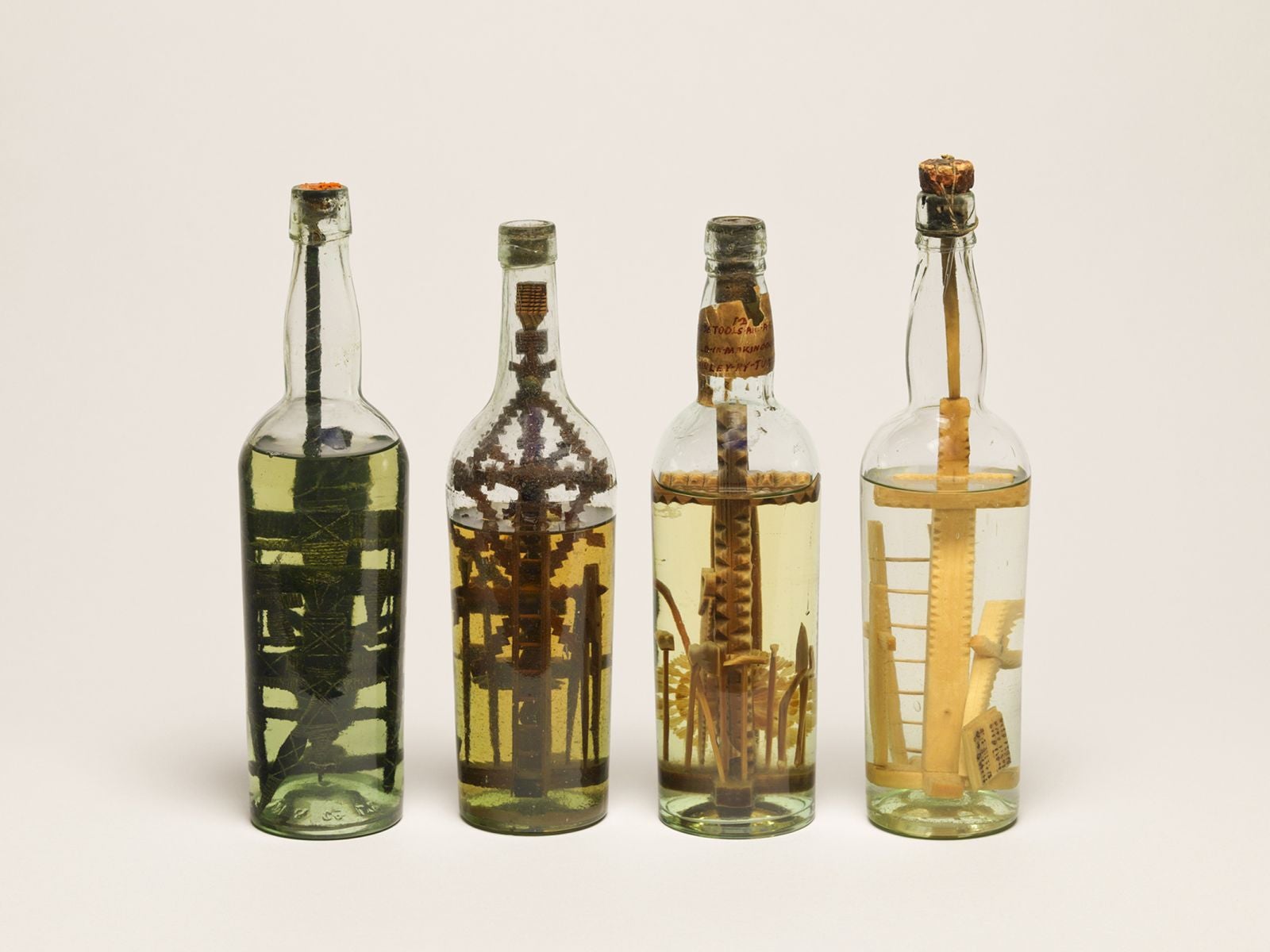 Holy water: these talismanic bottles are thought to have been made by Irish Catholics

Strewn across New England’s green fields and hills are dozens of sites that once housed utopian communes. From the Shaker villages of Sabbathday Lake in Maine and Canterbury in New Hampshire to Bronson Alcott’s militant vegan Fruitlands in Massa­chusetts, these experiments in 18th- and 19th-century communist living produced an extraordinary aesthetic, embodied in the clean-lined utilitarianism of Shaker furniture and the Fruitlanders’ brown linen smocks. Visiting these sites recently, I became sharply aware of the inherent value placed on such cultural eruptions of Americana. Shaker artefacts, for instance, are subjects of serious study (and exorbitant sales) and quilt-making is revered. Compare that to the pejorative manner in which folk art is regarded in Britain, conjuring up yoghurt-weavers singing with their hands over their ears and men dancing with handkerchiefs.

New England’s reverence for its folk art came to mind as I toured Tate Britain’s new exhibition. It made me aware that I’m not sure what “folk art” is. I’m still not enlightened. The Tate show is described as “the first major historical exhibition” of its kind in the UK, and that it fails to live up to expectations (but does so brilliantly) only proves its subject’s fluid and inconclusive nature. Does “folk art” mean anything creative made by a person lacking sophistication and a formal education, the product of artisans, rather than artists? Where does folk art end and outsider art begin? As the assistant curator Ruth Kenny notes in her excellent catalogue essay, quoting Jane Kallir, “folk art is, in fact, everything that everybody always thought was not art before the modernist revolution at the turn of the century”.

There’s a degree of hierarchy, if not snobbery, being addressed here – one that is only underlined by the high-culture setting of the Tate, where visitors are greeted by video monitors replaying Kenneth Clark’s greatest hits from Civilisation. If a similar show were to address modern folk art, its most telling display would be a selection of tattoos culled from the upper arms, necks and lower backs of the population. Contemporary art only adds to the confusion. Grayson Perry’s pots and his 2006 curated show “The Charms of Lincolnshire”; Tracey Emin’s quilts; Linder Sterling’s re-creation of Shaker rituals; Simon Costin’s Museum of British Folklore; Tania Kovats’s travelling caravan, the Museum of the White Horse; Angela Cockayne’s scrimshaw and trades-union-inflected blueprints; the graphic artist Jonny Hannah’s forthcoming Greetings from Darktown book and, pre-eminently, Jeremy Deller’s installations and films, all deal in one way or another in this vernacular. Is it possible to look at this material without the arch, knowing filter of post-postmodernism?

Take the wonderful “naive” painting of Admiral Lord Exmouth from his Hedgecumb Park, created circa 1815 and on display in the first room at the Tate. It shows a flattened, cartoon-like hero of the Napoleonic war, pushed up against a lyric landscape populated by equally cartoonish stags. His features are a squashed simulacrum, a childish impression of an “important man”. We see such a rendering in post-Picasso terms, a way of bridging the gap between reality and art’s two dimensions. But the audience for this work would have introduced no such barrier: it would have been direct, to the point, and immediately understood.

The same is true of almost all the paintings in the exhibition. They point up the modern proliferation of created images – it is no coincidence that most of the work in the show dates from the beginning of the Industrial Revolution. Indeed, the power they have for us now derives from our modern lives being so immensely overladen with imagery. We see a new image every few seconds. A pre-industrial Briton would have seen only iconography in churches, and perhaps posters and broadsheets. “Fine art” would have been far from their communal sight. Folk art, then, comes to us as an evocation of apparent innocence. Hence its relevance – or fashionability – in an age that is busy dumping the analogue. But that sense of nostalgia also has a reactionary air. It is, as E P Thompson said of the late 18th-century popular explosion of Methodism, “a component of the psychic processes of counter-revolution”.

It’s also a reminder of what we have lost, as the relatively small scale of the show betrays. Other critics have noted that a similar exhibition in New York, Boston or Washington would be full to bursting with Shaker furniture, scrimshaw and decoy ducks – as well as the work of indigenous peoples. A visit to the splendid American Museum in Bath only underlines the point (as does the fact that John F Kennedy was buried with a carved sperm whale’s tooth in his coffin). Of course, some might say that this inequality is due to the old west having far more “serious” art to draw upon in the first place.

Yet in some ways the Tate show is actually displaying the work of the British indigenous, unconsciously reflecting a new sense of nationalism in an industrial-imperial era, an assertion of a pre-multicultural age. Hence the “blackamoor” ship’s figureheads in one room, and the photographs of “blacked-up” characters in festivals of mummers from Padstow to Sheffield (as also seen in the beautifully restored films of the recent BFI compilation Here’s Health to the Barley Mow). As with the Burry Man of South Queensferry celebrated in that collection – a human figure stuck over with burrs and resembling a Scottish golem – there’s a ritual quality to much folk art that contradicts its apparently literalness. This is religion – or at least faith – uncommodified or directed from above, but expressed almost intuitively.

One of the most striking displays consists of four “God-in-a-bottle” pieces, filled with weird, talismanic shapes of bone and wood – which may or may not be Christian in origin. The catalogue suggests they were made by Irish Catholics. I imagine such transients, doubly exiled by nationality and faith in their new country, living in shanties by the railway lines they dug, creating these eerie microcosms. The bottles suggest, too, their creators’ transported fellows, who were sent as convicts to Van Diemen’s Land (often from Millbank Prison, whose site the Tate now occupies), and who, during the voyage out, had themselves tattooed with a symbolic crescent moon and seven stars – another arcane emblem of folk art whose meaning has been lost to us.

Such arcane or illicit images elide with the popular cloth and print collages created in the same period, the 1830s, by George Smart, a Kentish tailor who sold his replicated images to Tunbridge Wells tourists. Smart is a star of the Tate show, with his black-felt-covered, dummy-board silhouettes of cats, dogs and crows, and scenes such as The Earth Stopper, which shows a traveller by night confronted by a strange devilish figure (the joke being that it is merely a blackened sweep).

This stuff is beyond classification; that is part of its appeal. It is Britain’s feral past, the sort of thing that Augustus Pitt Rivers sought to encompass in his own subfusc collection, with its drawers-full of holey stones hung as talismans around livestock to stop the predations of witches and pixies. Its significance is almost deliberately obscure, in equal proportion to the attempts of collectors and curators to explain it.

It is no coincidence that folk art was reappraised in the early 20th century as modern artists turned to such potent, anthropological sources. That aesthetic came to a head in the 1930s and 1940s in the neo-Romantic movement, in the 1951 Festival of Britain’s celebration of “the people’s culture”, and in the films of Powell and Pressburger, threatened by war and drawn to a fantastical evocation of an Edenic England.

It is also cross-species. Folk art draws deeply on pre-industrial relationships with animals, portrayed as anthropomorphic spirits or domesticated stock. The painted signs at the Tate display proud pigeons and fat pigs, alongside centaur roundabout figures and Jack Punter’s concrete crocodiles, created for his 1950s Hampshire garden folly, following in the tradition of the “shell gardens” of suburban south coast resorts.

It’s a sensibility that chimes with the contemporary artist-curator’s fascination with the cabinet of curiosities or Wunderkammer. But whereas those proto-museums held mostly objects of natural origins, here we have a wonder-cabinet of trades and constructions telling human stories. Giant shoes acting as cobblers’ displays and papier-mâché meat from butchers’ shops vie with archive photographs of temporary triumphal arches constructed of dozens of chairs placed one on top of the other.

It is in this last room of photographs that the real context of folk art comes to life. Crude paintings hung in a gallery white space gain an emotional depth when one sees them in a photograph of an injured First World War soldier exhibiting his artwork propped up on a pavement, a cloth cap at his knees half-filled with coins. It’s a pathetic, powerful image. But there is no cloth cap at the Tate exhibition’s exit; only a box for used audio aids, and a note asking visitors
to write down their comments.