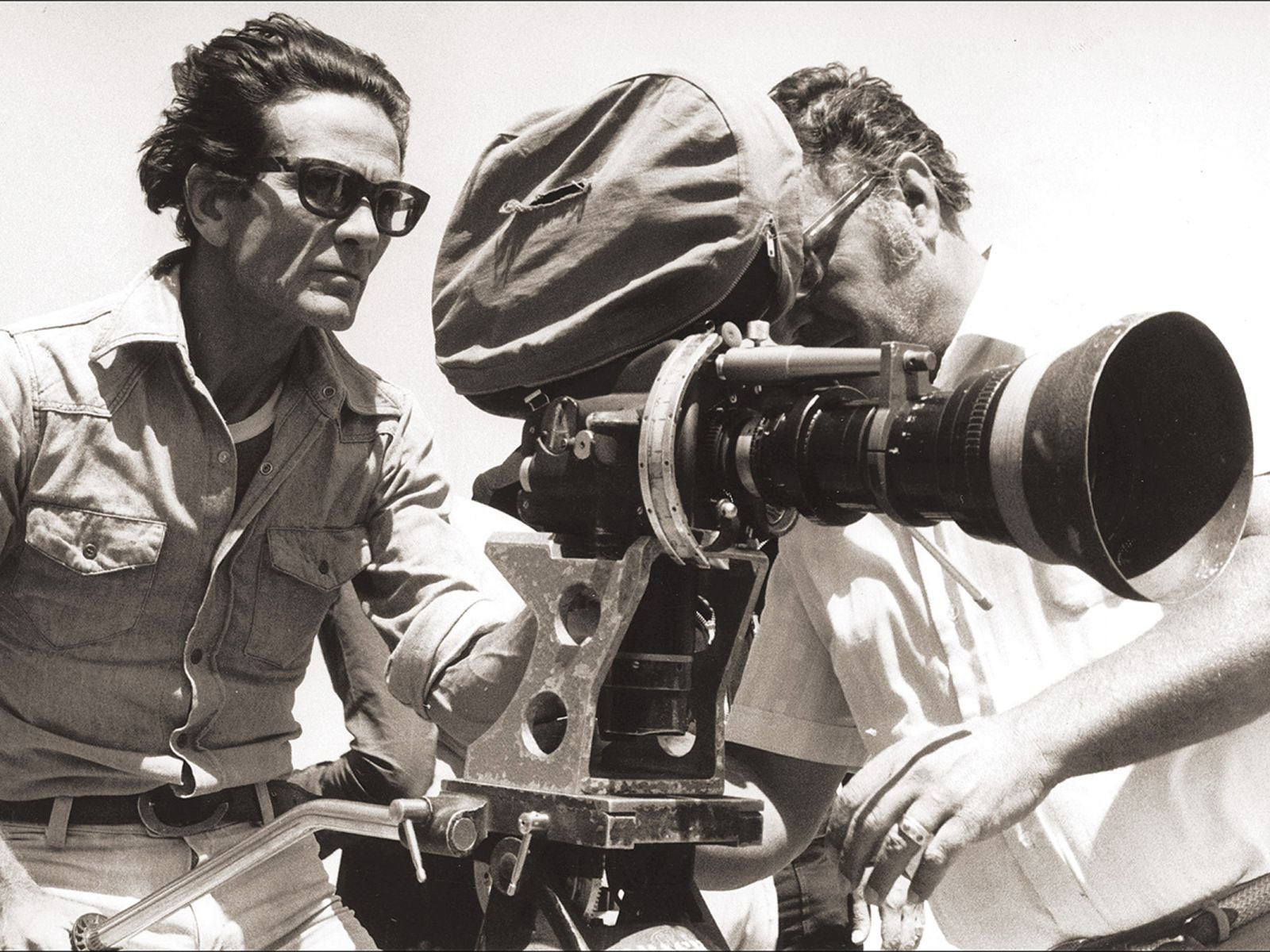 Poet and provocateur: Pasolini on location in Italy, 1970s. Photo: Mondadori via Getty

Roger Fry, the Bloomsbury art critic, thought that Caravaggio would have made a superb “cinema impresario”. With his dramatic use of light and dark, the Italian painter pretty well invented cinematic lighting. His great altarpiece of 1601, The Conversion of St Paul, glowed with such a photographic sharpness that contemporaries suspected some trick. In a revolutionary retelling of the scriptures, Paul lies prone beneath his horse on a dirt road to Damascus, his arms outstretched in proto-filmic shafts of light. There are no heavenly visions in Caravaggio, only human beings on the long, grubby pilgrimage of life.

Much has been made of Caravaggio’s influence on the fierce pauperist Catholicism of Pier Paolo Pasolini. At the end of his film Mamma Roma (1962), the working-class hero lies dying on a prison bed like a sanctified Baroque Jesus. The implied blasphemy of Caravaggio’s lowlife Christs and Virgin Marys thrilled the iconoclast in the Italian film-maker, whose miserable death was somehow foretold in his own work.

On the morning of 2 November 1975, in slumlands outside Rome, Pasolini was found beaten beyond recognition and run over by his Alfa Romeo Giulia. A 17-year-old rent boy was charged with the killing – a homosexual tryst gone murderously wrong. Or was Pasolini the victim of a political hit? His presumed killer turned out to be affiliated to Italy’s neo-fascist party; the verdict is still open. Pasolini was 53.

San Paolo, published posthumously in 1977 and presented here for the first time in English as St Paul, is Pasolini’s screenplay for the life of the apostle. Drafted in 1966 and subsequently rewritten, it was intended to be a sequel to The Gospel According to Matthew (1964), shot in the lunar landscape of Italy’s Basilicata region. The screenplay, with its New Testament voice-over, typically mingles an intellectual leftism with a Franciscan Catholicism: blessed are the poor, for they are exempt from the unholy trinity of materialism, money and property. The film was never made, for lack of funds.

Pasolini’s solidarity with the poor was at heart romantic. La ricotta, his 35-minute episode in the collaborative film RoGoPaG (1963), features Orson Welles as an American  director shooting a film in Rome about Christ’s Passion. Stracci (the name means “rags”), the sub-proletarian actor who plays the part of the good thief, dies on set from a case of real-life starvation. For all its manifest compassion, the film led to a suspended prison sentence for Pasolini on blasphemy charges. Over a tableau vivant inspired by a Caravaggio-like painting of the Deposition, Welles cries out sacrilegiously: “Get those crucified bastards out of here!”

Like La ricotta, St Paul champions those who have been disinherited by capitalism and the “scourge of money”. Pasolini believed that the consumerist “miracle” of 1960s Italy had undermined the semi-rural peasant values of l’Italietta (Italy’s little homelands). In the director’s retelling of the Bible, Paul stands as a bulwark against the “corruption” brought to Italy by Coca-Cola, chewing gum, jeans and other trappings of American-style consumerism.

Nevertheless, as the former Saul, a Pharisee and persecutor of Christians, Paul was an ambivalent figure for Pasolini. After his conversion on the road to Damascus in 33AD, he took his mission round the world and became the founding father of the Christian Church in Rome, with its hierarchy of prelates and pontiffs. So, in some measure, he lay behind the Catholic Church that Pasolini had come to know in 1960s Rome, with its Mafia-infiltrated Christian Democracy party and its pursuit of power and political favour. In the screenplay, Paul is by turns arrogant and slyly watchful of his mission.

The saint’s story is updated, cleverly, to the 20th century. Cohorts of SS and French military collaborationists in Vichy France stand in for the Pharisees. With a fanatic’s heart, Paul oversees the killing and mass deportation of Christians. The action then fast-forwards to 1960s New York, where the post-Damascus Paul is preaching to Greenwich Village “beats”, “hippies”, “blacks” and other outcasts from conformist America (“I appeal to you, brothers . . .”). His attempts to overturn capitalist values in Lyndon Johnson-era America are met with hostility by FBI operatives and White House flunkies. In the end he is murdered on the same hotel balcony where Martin Luther King was assassinated in 1968. Pasolini’s approximation of the apostle of black liberation to the apostle of orthodox Christianity just about works.

Though fascinating, St Paul is not the “literary work of the first magnitude” that the French philosopher Alain Badiou would have in his foreword. (Rather, it reads like a preliminary sketch for something to be coloured in later.) Inevitably one scans the screenplay for clues to the film-maker’s murder. Italo Calvino believed that Pasolini was killed from a “D’Annunzian” hankering after redemption through violence. The scene of the murder, a shanty town near the Idroscalo di Ostia, not far from Fiumicino Airport, presents a Pasolinian pasticcio of the poetic and the squalid: shacks lie scattered across a filthy, blackened beach and in the distance rise the tenement slums of Nuova Ostia. At best, Pasolini’s was a sleazy kind of martyrdom; at worst, it was a bludgeoning out of a tabloid crime sheet.

Ian Thomson is the author of “Primo Levi” (Vintage) and “The Dead Yard: a Story of Modern Jamaica” (Faber & Faber)