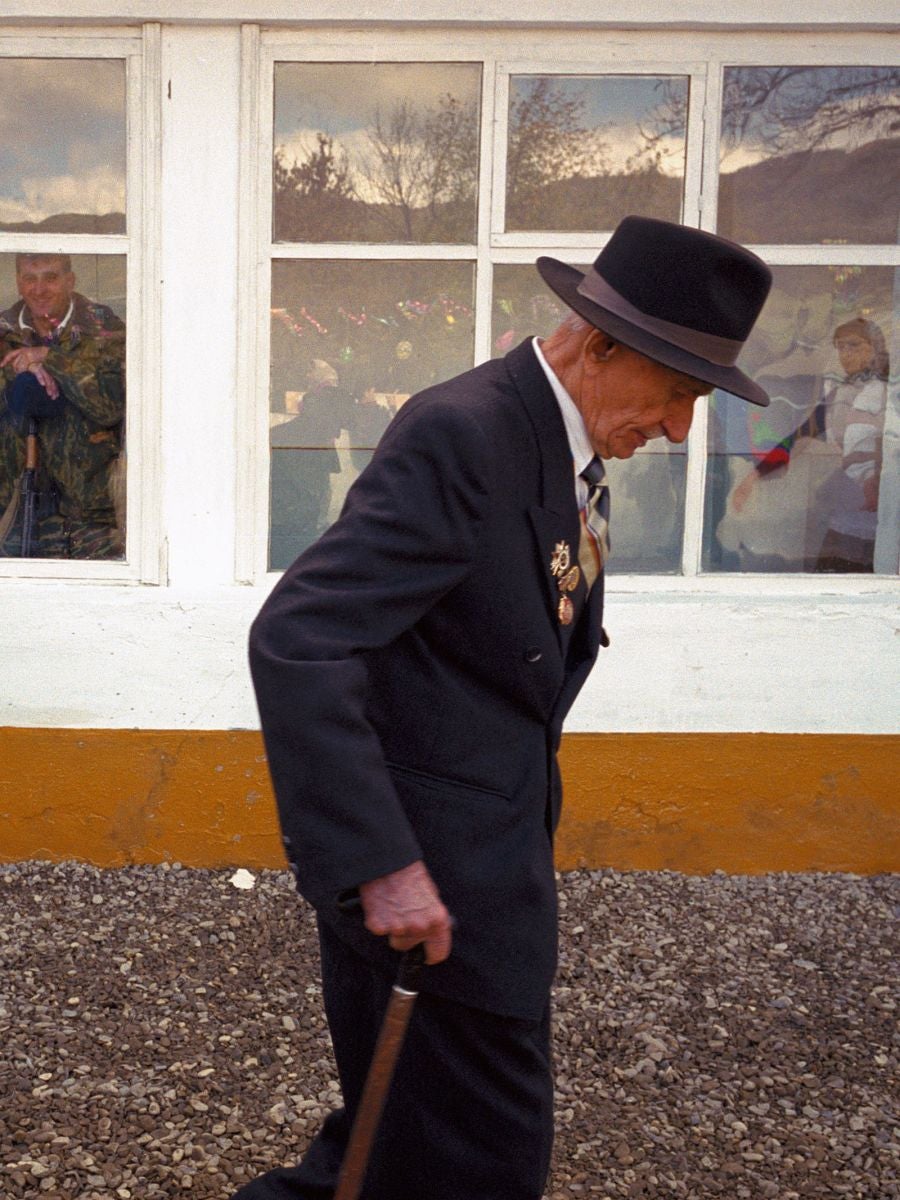 In our town there was an old man who would come out of his house and take his daily walk along the sides of the streets in the town. There were not many sidewalks, so he shared the street with the cars, but in the backstreets the cars went by slowly. He was a tall, thin old man with a slight stoop – the father of the doctor in our town. He held his cane in one hand and a cloth bag in the other, for the mail, and he walked briskly but with such small steps that he did not advance very fast.

He seems to be gone now. The warm weather has returned, but he does not appear on the streets. In the cold weather there are no old men on the streets. Now that the warm weather has come, a few old men have appeared, but we see them only in the centre of the town, walking a short distance along a sidewalk to enter a shop or standing at a street crossing. One of them is fleshy and bearded, in shorts and suspenders, dark socks and sturdy shoes. Another is bone thin and totters, swaying to one side, resting a hand against whatever bit of wall is nearby, or leaning far back to open a shop door.

The sweaty, glorious return of Eurovision

Another old man, before the doctor’s father, used to walk past our house. He had good balance and a longer step. He wore a tam-o’-shanter at an angle on his handsome head. His white beard was short and curly. He had lived in the town all his life, unlike the doctor’s father, and he would stop to tell us where the sidewalks used to be and who had died a violent death, in which house. We no longer see him these days.

Another old man, once a week, would stand dressed in a suit and overcoat by his gate, in polished formal shoes. He was out early, waiting to be picked up by his son.

We see these old men on the streets of our town, and we see others in a nursing home, where they have been left by their families. The nursing home is itself like a little town, with its own chapel, barbershop, gift shop, and community meeting room like a town hall. There are the offices of the administrators, and there is the hallway like Main Street. There you may meet the others in the town and stop to talk with them. Some of the residents, though, spend the whole day going up and down the hall. They have given up stopping to chat, if they ever did, and as they pass you, they stare hard at you, almost with hostility, or else look straight ahead with vacant eyes.

One of them, fine-featured, neatly dressed, who walks briskly, with a vigorous step, mutters to himself about his men and what work they will be doing today. He stops to tell us that he must be up early in the morning – to get down to the factory. The factory is gone, his men are gone, but he still seems to be in charge of something.

A large-framed, tall, and bony old man still has all his wits about him. He sits in his wheelchair in the doorway to his room, facing out into the hall, and if we stop to talk to him, he tells us about his life as a wool sorter and grader in Australia. His wife visits him almost every day and spends many hours there, sitting in a chair next to him, their little dog on his lap brightly observing the foot traffic and wheelchair traffic as it goes by.

Lying in his white-sheeted bed is another old man, the professor, with skin almost as white as his sheets. In a nearby bed lies his roommate, his skin dark brown. They are good friends and are affectionate with each other, though the roommate has more of his wits about him than the professor. The roommate enjoys his visits from his family, but does not like to leave his room. The old professor has lost a lot of his memory, though not his sense of humour. He tries to make a joke, but he does not speak clearly, and only his family can guess what he is saying. He knows who his visitors are, but he does not remember what he has done in his life. His family wheel him out of his room in his wheelchair and down “main street”. At mealtimes, they take him to the dining room, where they help him to eat his food.

In a village we have read about, two hundred years ago, an old man would live out his days, whatever his condition, either in his own home or in the home of a relative or perhaps another person paid to accommodate him. He might be a burden to his family, or he might find small ways to help them. As long as he could get about under his own power, he might roam the streets or the fields, the meadows or the woods. Then one day he would be struck down by illness or accident, and die slowly or quickly.

Amiel Weekes, not yet near the end of his life, but elderly, lived on the south side of the village overlooking the sea and the woods. Every Saturday afternoon, when the sun was still high, he would come in from his work, wash, shave, and eat his frugal supper of bread and milk. Then he would sit down to read his Bible. In this way, he began his Sabbath.

Old Uncle Jonathan came to mortise posts and set fence. The children thought no other man in the town could mortise posts. Then, when the sun approached the Northern Tropic, he would come again with his hoe to plant corn, and again when the corn was up. The children would gather around Uncle Jonathan, for he had a kind gaze and a kind voice for children, and they liked to look on, hour after hour, when he mortised posts or spliced rails.

He was tall and athletic, and limped from rheumatism. He was regular in stopping work to take some refreshment at eleven and four o’clock, when he would lay down his tools and have a little rum, salt-fish, and crackers. His face was venerable, with a high intellectual forehead, and his mind was probably equally intellectual, but he was modest in expressing it. Like others of that time, he lived in obscurity, poor, working for his daily bread, at last dying of old age, mourned for only a few days and forgotten.

Ebenezer Brooks, another old man in the same village, had prominent eyes, a large Roman nose, and a broad, sloping forehead. His hair was silvery white, and hung down on either side of his spectacles as he sat leaning back in his chair by the side of the fireplace reading the great Bible or sleeping over it in his quiet home.

Old Uncle Eben was Ebenezer’s son. In late middle age, a stroke deprived him of the use of one half of his body and he became a heavy burden to his family. For ten years he sat in his chair or moved about by leaning on the top of it, shifting it forward, and leaning again on the top of it. He spoke in monosyllables but never clearly enough to be understood. He would take up a pencil in his left hand and scratch a few words with it.

He used to hobble over to his brother Obed’s house, leaning on his chair back and hauling it along, resting often in the chair when he grew tired. He returned less and less often to his own house. At last he remained in Obed’s house, sitting by the kitchen win<span style="letter-spacing:
-.1pt”>dow or on a plot of grass in warm weather or standing in the woodshed in winter. There, for many years, with his left hand, he would saw and split kindling. At last he contracted an inflammation of the bowels and died.<span style="letter-spacing:
-.1pt”>

George Weekes would wander from place to place, restlessly, all day long, returning to the home of the relative who looked after him only at nightfall or when he was hungry or tired. One winter day, he had travelled farther from home than usual. It began to snow and the east wind was blowing. The snowflakes fell on him more and more thickly. The storm and darkness gathered upon him when he was still far away from the fireside and evening meal that was waiting for him. The nor’easter howled through the trees and the snow encased their trunks and loaded down their branches and filled up all the sheltered spots in the landscape. Old George retraced his steps to the nearest house, but the only ones at home were children, and they were afraid to let him in. So he returned to the valley which he had to cross to reach home and descended into it, but he never reached the far side. His strength failed. A strange sleep came over him and he lay still. The snow covered him deeply.

Old Seth and Old Joe were eighty years old and too feeble to work. Their wives no longer spun wool or wove their own cloth. So the old men made an arrangement with Obed Brooks, proprietor of the general store. They deeded him some of their property, and in exchange, he supplied them with groceries and coarse broadcloth to keep them decent and warm. It then became a common sight in the village: Old Seth and old Joe coming up slowly along the Brewster Road with a wheelbarrow, taking turns wheeling it. In the wheelbarrow they would carry home their pork and molasses, stopping now and then to talk to someone they met along the way, and then walking on, chattering away together like two children.

Copyright Lydia Davis, 2014. The last parts of this story were adapted from a memoir by Davis’s ancestor Sidney Brooks (1813-87)
Lydia Davis’s most recent collection is “Can’t and Won’t” (Hamish Hamilton, £16.99)