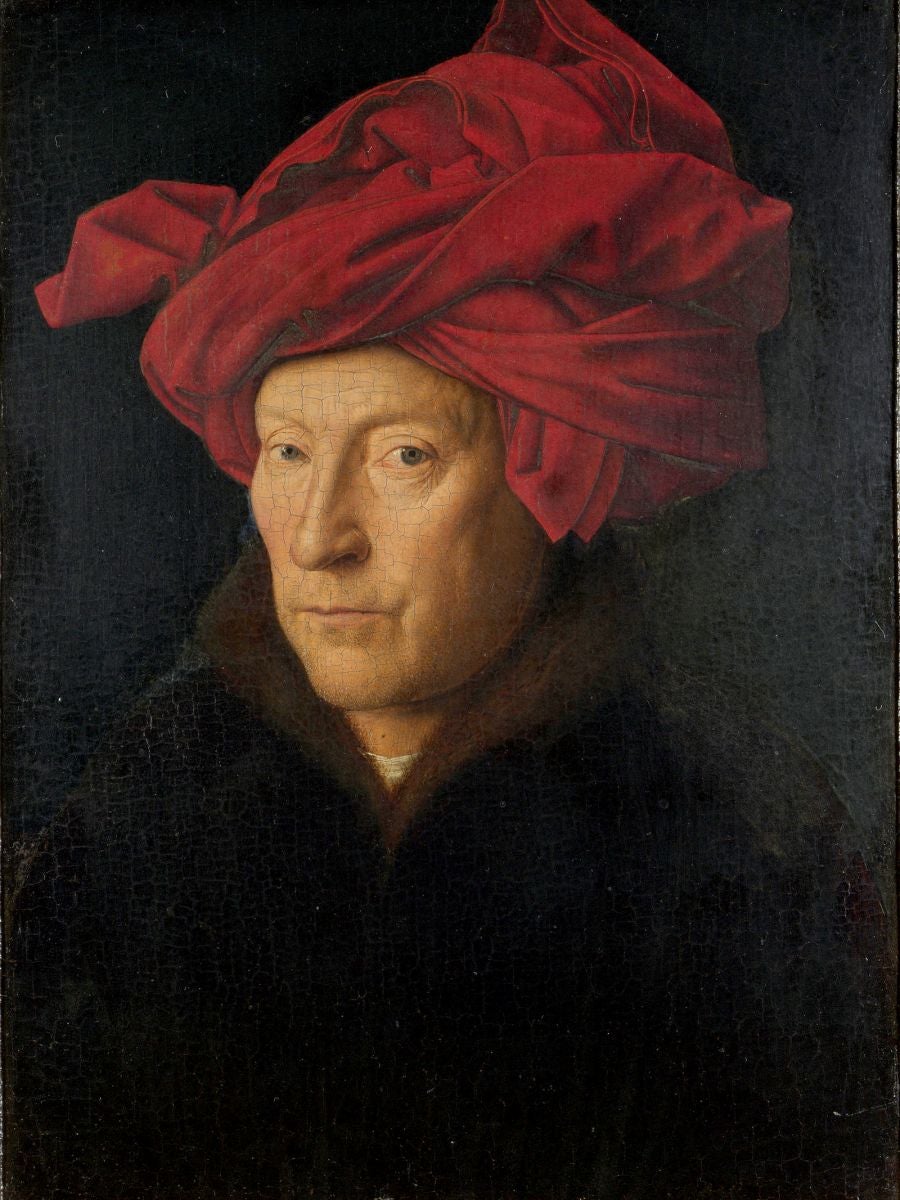 Van Eyck’s Portrait of a Man (1433), long supposed to be a self-portrait

It would be possible (in fact, very easy) to write an agreeable book about the history of the self-portrait that took in the great masters, from Dürer and Michelangelo to Rembrandt, Van Gogh and Andy Warhol; a book that made reassuring and familiar points about artists we know and love, even if it didn’t change anything. Thank God, this is not that book.

What’s more – and here is a rare comment to find in a book review – James Hall’s cultural history is not long enough. The closely linked essays, taking us from the scribbled self-portraits of medieval monks right through to works composed of tin cans of excrement and photographs of body parts, include many revelations but Hall’s boundless curiosity explodes in all directions from the relatively few pages he has been allocated. Mostly we want more: more detail, more explanation and many more pictures. Given that this is a chunky and well-illustrated volume, that is meant as high praise.

Hall has quite a story to tell, because the history of the self-portrait is also the history of the status of the artist. For the ancient Greeks and Romans, self-portraits were relatively rare and unimportant; the cultural status of artists was very low. When it comes to portraiture, the Middle Ages are, as Hall notes, mostly ignored; yet self-portraits are to be found in illuminated manuscripts. Some of them are witty and mysterious. Artists largely regarded themselves as humble creatures: as worshippers, not the worshipped. St Dunstan, who was an abbot of Glastonbury Abbey, an archbishop of Canterbury and a wealthy aristocrat, represents the humility of the medieval mind. He drew himself as a tiny, rotund figure worshipping Christ while grovelling on the edge of a mountain.

The Renaissance, we are told, was when all of this was cast aside and when individualism was invented, thanks, in part, to the invention of the clear-glass mirror. Narcissism, which already had a long philosophical and artistic history, was handed its ultimate tool. Hall, however, points out that things are far more complicated than that. There were serviceable polished-metal mirrors in use from the classical era to the Middle Ages. Many Renaissance artists still portrayed themselves at the edge of things, as a part of the humble crowd of worshippers. And yet the first psychologically interesting and gripping self-portraits come from the 1400s, at the height of the “mirror craze”.

Jan Van Eyck’s (probable) self-portrait of 1433, with his badly shaven chin and his bloodshot eyes, still feels like a pivotal moment in the history of art. “White highlights turn these eyes into scintillating mirrors,” Hall writes. “A moment later, and his piercing gaze will be gone – perhaps following the light that streams in from his right. He is a man who sees things – himself included – in close-up, but without losing track of the bigger picture.” And he’s right. It’s hypnotic.

Why did Van Eyck make such a picture? Self-portraits, unlike paintings of rich patrons, were of low financial value. Hall suggests that the Van Eyck represents the rising social status of the artist in northern Europe; that it was painted as a “dynastic image” to be passed down to his descendants. This small, portable object is certainly very different from the self-portraits by earlier artists such as Taddeo di Bartolo and Giotto that infiltrated religious paintings.

It is not until two generations later, in the 1490s, that the Renaissance “artist-as-hero” starts fully to emerge. Rich trading cities such as Florence and Nuremberg were so proud of their artists that they encouraged the cult. In Florence, a wall monument to Giotto was unveiled 150 years after his death. It boasted in Latin: “I am he through whom painting, dead, returned to life, and whose hand was as sure as it was adept . . . After all, I am Giotto.”

“I am . . .” A similar arrogance shines out from the repeated and meticulous self-portraits of Albrecht Dürer, with his lovingly coiled hair, dandy’s clothing and belligerent stare; from Raphael’s androgynous early self-portraits; and even from works by Giorgione and Perugino. Coded references to Christ and biblical parallels remind the viewer that these artists are special creatures. Stories about their extraordinary precocity – child prodigy after child prodigy, overawing their teachers – become common and they are intriguingly similar to popular stories of saints’ lives. By portraying the world, the artist begins to lay claim to a Godlike talent as creator.

In profoundly religious societies, humanism can only be pushed so far and all this self-aggrandisement quickly became too much. Artists got the message. Hall devotes a fascinating short chapter to mock-heroic self-portraits, including Michelangelo’s representation of himself as a flayed skin in The Last Judgement in the Sistine Chapel and Titian’s self-portraits in old age. Hall finds in the latter “a sluggishness and absent-mindedness . . . The eyes look a little watery, the mouth a bit slack, the hands weak . . .” Artists were still too dependent on temporal and ecclesiastical patrons, perhaps, to see themselves as a class of heroes. Vermeer, painting himself from the back in a ridiculously over-furnished studio, and Velázquez, in his wonderful and mysterious court painting Las Meninas, are among those playing with the idea of their ambiguous social status.

Then the artist-as-hero returns in full splendour in the work of Rembrandt. No other great artist in history has depended so heavily on the self-portrait for his reputation. Rembrandt completed more than 40 painted self-portraits, etched himself 31 times and left half a dozen drawings of himself. He became, Hall tells us, perhaps the most recognisable artist in the world and his likenesses were bought early on by rich enthusiasts, including King Charles I. Rembrandt portrayed himself in many ways but if we concentrate too much on the great, very late self-portraits, in which mortality outstares itself, we miss the dishevelled truculence of the proud workman that is, perhaps, ultimately how he wanted to be remembered. Quite consciously, he turned himself – tousled, rough, arms akimbo – into one of the first international artistic superstars.

Among the many virtues of this book are the discussions of lesser-known artists whom Hall insists we think about. He is particularly strong on underrated female painters such as Sofonisba Anguissola, Angelica Kauffmann and the mysterious sculptor Anne Seymour Damer. But the biggest surprise is Artemisia Gentileschi. Her Self-Portrait as the Allegory of Painting (produced between 1638 and 1639), a dramatic, unusual and muscular work rightly described by Hall as “the most forceful affirmation of artistic genius that had yet been painted”, is a bold reference to the God of Michelangelo’s Sistine Chapel. It’s in the royal collection in London and it is frankly shocking that we don’t know it better. Hall persuaded me, at least, that it deserves to be one of the more celebrated paintings in the country.

The later part of the book is dominated by an excellent mini-essay on Gustave Courbet and a sensitive study of Van Gogh’s chair paintings. The final chapter covers a range of modern self-portraits that privilege the artist’s body and autobiography over images of the face. We are reintroduced to the narcissism of Andy Warhol and Jeff Koons and the autobiographical art of Tracey Emin.

By now, Hall is charging through lists of wildly different artists, ticking off some and leaving enormous gaps – there is no David Hockney, no Lucian Freud and, most shockingly, very little Pablo Picasso. Picasso was, after all, an obsessive creator of self-portraits, including of himself in the act of painting, and many of them refer back to artists whom Hall has discussed earlier. If there is a paperback edition, I seriously suggest a new chapter.

Hall, though, remains attentive and interested in those he does choose and is largely non-judgemental. Yet, for this reader at least, there is an uneasy sense that we have moved from the artist as a source of interest (even a hero) because of what he or she makes to the pretence that the artist is inherently interesting – as a thinker, a personality, or a celebrity – outside of any notion of making. “Look at me, not merely at what I happened to produce.”

This may appear democratic but it is the opposite. It implies that, for some unexplained reason, the consciousness of self-described artists is more valuable than that of the teeming millions around them. Really? Are today’s artists thinking about love, death, sex and money in ways that are more profound or interesting than other people? The only validation offered is the fickle and, as we have all learned, highly unreliable international market.

Like the brief era of the Renaissance hero-artist, this cannot last. The consequence – in the age of the ubiquitous selfie, which claims that we are all heroes, all makers, all creators – will be a radical diminishment in the status of the artist and, in many cases, of art itself.