Sheryl Sandberg has conquered the worlds of business, publishing, and tech, but in the English language, Facebook’s chief operating officer has found a formidable foe. Her crusade against the word “bossy” – on the grounds that labelling young girls “bossy” deters them from becoming leaders – has been blasted far and wide, on the left and the right. Dave Lesser, a daddy-blogger at Time, claims “bossy” is gender-neutral; he says he uses the word to scold both his daughter and his son. “Is bossy used that often to criticise girls and women?” he asks. “Is the word ever used to describe anyone over the age of 11?”

Yes and yes, if you look at the data.

Orin Hargraves, a linguist at the University of Colorado, Boulder, used the linguistic software Sketch Engine to analyze the way “bossy” is used in the English language. “In a corpus of nearly 13 billion words,” Hargraves wrote in an email, “the pattern ‘she is bossy’ is much more frequent than ‘he is bossy’ (210 hits for she, 131 for he). The nouns with gender markers that ‘bossy’ most frequently modifies are all feminine: bitch, babe, sister.” All of these nouns apply at least as often to adult women as girls. “People use bossy in a very marked way that is both sexist and pejorative,” he said.

The vision of Ralph Vaughan Williams

Nic Subtirelu, a sociolinguistics PhD student at Georgia State University who blogs at linguisticpulse.com, used the Corpus of Contemporary American Language – another compendium of text drawn from all types of media – to collect a random sample of 101 uses of the adjective “bossy”. He then looked at the gender and age of the people described as “bossy”, and found that they were female three times as often as they were male, and they were predominately adults. 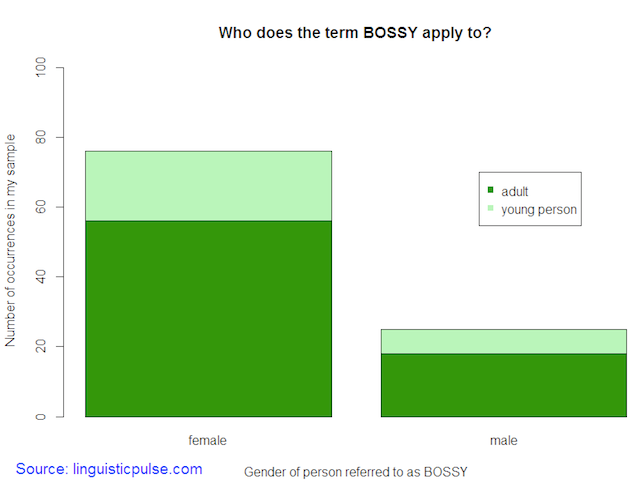 History, too, supports Sandberg’s contention that “bossy” is levelled disproportionately at women. The very first time the word appeared in writing, it was in just the sense Sandberg is trying to fight: according to the Oxford English Dictionary, a short story in Harper’s in 1882 includes the line, “There was a lady manager who was dreadfully bossy.” (Interestingly, the author also appears to be female: The byline is “A Working Girl.”)

“People say things like ‘lady boss’ or ‘woman boss’ but not ‘man boss’ – because ‘boss’ is already stereotyped as male,” said Lynne Murphy, a linguist at the University of Sussex. “‘Bossy’ as applied to women and girls gives the impression that they somehow don’t have the right to be the boss, that they are acting in a socially inappropriate or unacceptable way.”