Warning: this blog contains spoilers for the first series of House of Cards

The first series of Netflix’s House of Cards is full of motifs, of threads that run through the thirteen episodes if you care to look for them. For instance, Kevin Spacey’s character, the calculating and Machiavellian politician Frank Underwood, has a habit of rapping twice on a table top or car door when he’s come to a decision, which acts as a kind of aural punctuation echoing through the series. More obvious, perhaps, is Underwood’s habit of turning his head to speak directly to the viewer, usually with a pithy aside or epigram (a trick borrowed straight from the original 1990 UK series). But my favourite recurring scene is also where you find some of the drama’s most genuinely intimate moments – when Frank and his wife Claire share a cigarette by the window of their immaculate DC townhouse. The smoking itself is important, as it signals transgression and trust. Their conversation as they pass the cigarette to each other is even more important, though. This is when they plot.

The Underwoods’ marriage is a rare thing in a political drama: it is an equal partnership, even if it doesn’t seem so on first glance. On the surface, it looks as if his is the career that matters: he is the Democratic Majority Whip in the House of Representatives, a power broker who has the ear of the President. Yet Claire is a professional success in her own right, the founder of an NGO who raises millions of dollars and writes bills for Congress. The way the show is structured reflects this – unlike in the original UK series, where Elizabeth Uruquart had a lot of the ideas and very little of the agency, Claire Underwood has her own storylines. She isn’t just Lady Macbeth, pacing the floor while her husband does the deed. She gets in her own tangles with lobbyists, has her own extra-marital affair, and formulates her own strategies for seizing power.

Above all, though, the Underwoods are a team. The success of their quest for power and revenge relies on them both, in keeping everything in balance. As Nancy Dewolf Smith puts it in the Wall Street Journal: “This is a power couple with the same malignant chemistry as pairs of serial killers, where each needs the other in order to become lethal.” Even the way Claire addresses her husband is calculated to demonstrate how closely entwined they are: she’s the only one who calls him by his full name, Francis. At first this sounds stilted and strange when everyone else calls him Frank, but then you realise why she does it. It’s a kind of possession, a reminder that he isn’t acting for himself alone. Their relationship may be twisted and dark – Frank declares early on that he loves his wife “more than sharks love blood” – but it is essential to what they achieve. 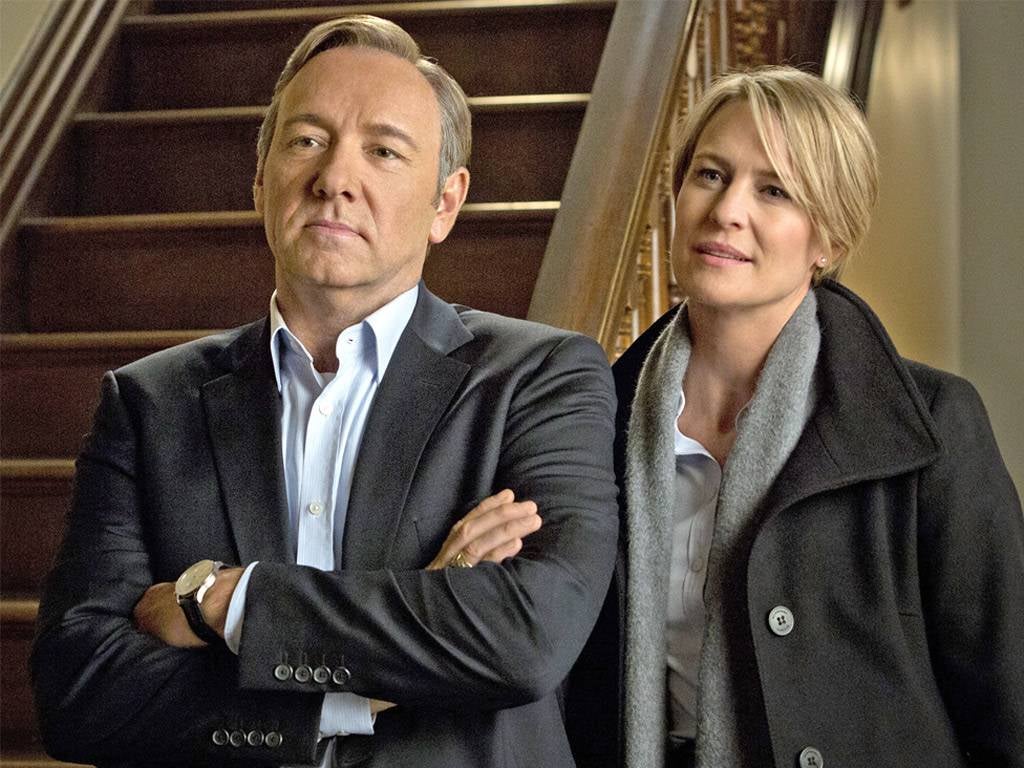 United we stand: Frank and Claire Underwood are
literally partners in crime

It’s a symbiotic relationship. Robin Wright, who plays Claire in the series, told the Radio Times: “I feel like [Claire] has the levers, the sound board in the music room. She’s operating the operational modes and in contrast, Frank is very impulsive.” Claire needs her husband’s contacts and position to raise money for her NGO and to curry favour with the Washington elite. Frank needs Claire’s professional independence from partisan politics as a way of introducing controversial ideas at arm’s length and safely securing favours from lobbyists and industry. Above all, with her cool charm and elegance, she makes him seem more rounded, less monomaniacal. Their policy of ruthless honesty with each other preserves their unity, and it is only when they start concealing things from each other that their pursuit of power is thrown off course.

Since this relationship is the driving force behind the drama, it is fundamental to the success of House of Cards. Both in real life and in other shows (like The West Wing, say, or Scandal) politicians’ wives are tools to be deployed on the campaign trail, or else end up beating their fists fruitlessly against the closed door of power. It’s no accident that Robin Wright’s portrayal of Claire won the show’s only Golden Globe this year (also the first major acting award for an online-only series). Her incredible poise rivals Kevin Spacey’s intoxicating southern drawl for the prime spot in my affections. It’s brilliantly refreshing to see her make such a success of the role – these days, it’s becoming less and less plausible that any woman would aspire to a full-time job that consists almost entirely of standing next to her husband and waving graciously. House of Cards is a far better drama because it has independent female characters and an equal partnership at its heart. As we watch the Underwoods’ inexorable rise continue into the second series (which is released on Netflix today) it’s difficult not to wonder – if politics is more interesting on television when women can occupy positions of power and influence, how much longer can we ignore that fact in real life?