“You’ve got to be a bit daft sometimes, if you want to change things.” Those words, spoken in the closing sequence of writer Julie Welch’s semi-autobiographical film Those Glory Glory Days, help illustrate why the 1983 movie is that rarest of things, a film about football that works, and has appeal beyond fans of the sport. The film is being screened in a special charity event on 18 March in Tottenham, prompting me to mull over its appeal.

Directed by Philip Saville, the film was part of Channel 4’s First Love series, executive produced by David Puttnam, and is a companion piece to Jack Rosenthal’s Ptang Yang Kipperbang, the film that opened the series the year before. This was a time when Channel 4 was attempting to give the British film industry a shot in the arm, rather than cobble together scapegoating freak shows half-heartedly tarted-up as social commentary. Both films are nostalgic and in places idealised versions of childhood growing pains, but criticism of what can come across to contemporary viewers as caricatured portrayals misses one of the central points about how we look back on our formative years.

What also stands out about Those Glory Glory Days is that it does not make the ‘women in football’ angle its central one. Even today, in our supposedly more enlightened times, a woman involved in any way with football can still be seen as something of a novelty. It is something that, having had many conversations with Welch, I know irritates the hell out of her. She wrote a film about football fans, fans who happened to be girls, and girls who happened to be fully-rounded characters. The film succeeds because it is primarily about the human condition. It understands what football can mean to people, but it weaves this in with an examination of wanting to belong, teenage obsession and the tendency to seek escape from the trials of the real world.

None of this means Welch ignores the very real obstacles she faced after becoming the first female football reporter on a national paper in 1969. The film starts with reporter Julia Herrick in the press box at Tottenham Hotspur’s White Hart Lane ground, a scene in which a number of real reporters including the Guardian’s David Lacey appear. Herrick is being patronised by hostile hacks, in particular one unpleasant character played by Victor Meldrew. Fuming, she leaves the ground, where she bumps into her childhood hero, Danny Blanchflower – the captain of the famous Spurs Double side who later went on to forge a successful career as a journalist. The encounter prompts a flashback to Julia’s schooldays and the gang of Spurs fans she hung around with in the 1960-61 Double season.

That Spurs team became the first to win the modern Double – the League Championship and FA Cup in a single season, and the excitement it generated gripped the nation in an age when football was just beginning to become a mass entertainment industry. The young Julia’s obsession with Spurs, and Blanchflower in particular, draws her to a gang of similarly Spurs-obsessed schoolgirls, and the team’s progress, together with the gang’s attempts to get to see their heroes, infolds against a backdrop of Julia’s unhappiness at home. Her parents are steadfastly suburban and middle class, her mother wants her to be more ladylike and the family to climb the social scale, and her father’s affair with a colleague is threatening to shatter domestic certainties. Julia sees her parents as so caught up in their own lives, they do not notice hers – a truism of many a teenager’s experience. 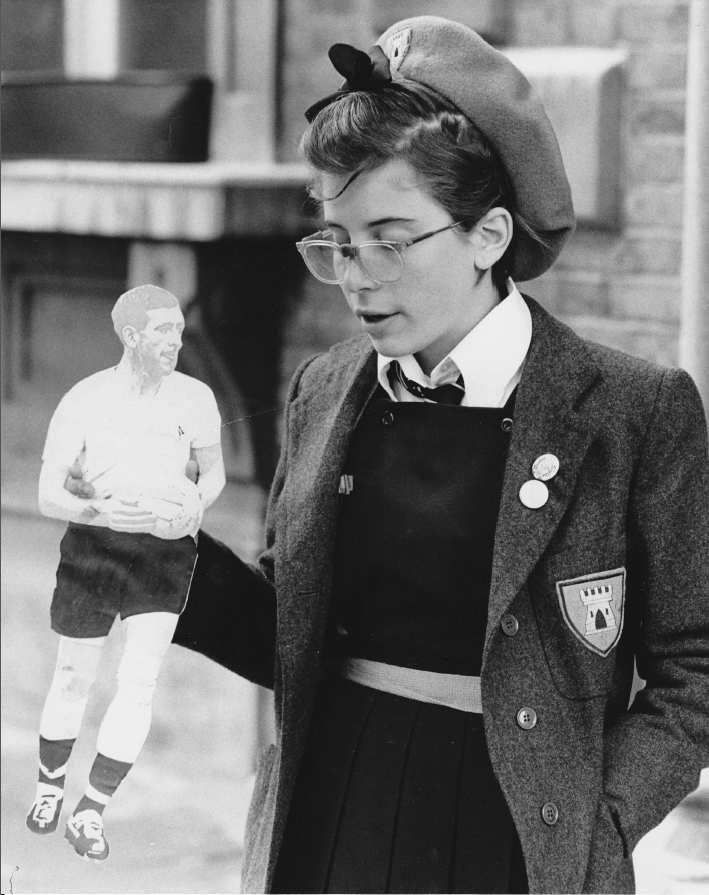 There’s teenage angst and alienation aplenty, but a fair bit of humour too. The flashback sequences are embellished, as our memories often are, and in one memorable scene the gang gather in the centre circle at White Hart Lane wearing unwieldy cockerel hats chanting: “We kiss this ground, for the love of Spurs. Til death. Break this code and disaster will strike! Arsenal will win the league.” Given what’s happened since, someone evidently broke the code.

There’s another enduring angle too. Julia is appalled when she discovers one of her father’s rich friends – who has no interest in football – has four tickets for a business junket to the FA Cup Final, the game at which the Spurs team could achieve immortality. So she steals the tickets. Explaining why she does it, Julia says: “There were hundreds of people like me, ordinary people who never got near the Directors’ box, never arrived by Rolls Royce and parked in the bigwigs’ car park next door to the ground, never had a chance of going to the Cup Final because all the Rolls Royce people had first claim on the tickets.”

The girls reach Wembley with the stolen tickets, but are apprehended by the police at the gates. It is apparent disaster, the end of the world, but Julia’s shocked parents finally realise “we haven’t given you as much time recently as we should have done” and vow to make a new start. Oh, and Spurs do win the Cup, completing the Double and securing their place in history.

Zoe Nathenson, who played the young Julia, says the appeal of the role was “to emerse myself into such a complex character at a turning point in her life – with puberty, friendship, parental divorce and her true love, Tottenham Hotspur.” Investing a film about football with great meaning is something that risks accusations of disproportionality, but this film works because it is really about how we are as people, and how the trivial can become important for complex reasons.

Welch says writing the film “was a dream come true – a chance to express my love and gratitude to a wonderful Spurs side that showed the 12-year-old me the impossible wasn’t impossible at all, as long as you believed and were prepared to work for it. What made it an even more fantastic experience was that Danny Blanchflower agreed to be in it. He was my hero when I was a child and when he died I vowed that I would make sure future generations of Spurs supporters would know just how special he and his team were.”

That’s why, in the film’s concluding scene, Welch gets Herrick to ask Blanchflower, who played himself: “Do you think I’m daft, wanting to be a football reporter?” Danny answers: “Well, I think you are a bit daft, yes, but you’ve got to be a bit daft sometimes, if you want to change things. You’ve got to fight for your place – if you want to get into the team.”

Those Glory Glory Days is available on DVD. The film is being screened at the Bernie Grant Community Centre in Tottenham on 18 March to raise funds for the Tottenham Tribute Trust, which helps people connected with the club who have fallen on hard times