Microsoft’s XBox One launches on Friday, and it’s quite good for illustrating the many ways in which we make slight changes to our expectations of privacy in exchange when we think the trade-off if worth it.

It’s a cliche, but to illustrate this point, here’s the advertising technology imagined for Minority Report:

And here’s what happens when you walk into a room with an Xbox One in it:

Skip to 6:01. What you’re seeing is the Kinect camera recognising a person’s face, and tracking them. If it’s somebody who has an XBox Live profile, it will know who they are and log them in by the time they’ve sat down and picked up a controller.

There is little difference, functionally, between these two examples, and you can see how the second example might lead into the first. You don’t have to register your face with your Kinect – Microsoft has made that clear – but there are all kinds of privacy ramifications of introducing this kind of technology into a games console.

You can Skype chat with friends across the world, but you “should not expect any level of privacy” while you do so. The Kinect camera will always be listening to you, waiting for you to give it a voice command, because Microsoft wants its new console to be at the very centre of your home entertainment system, and have every other device – including satellite or cable TV – going through it. You could turn it off, but then you wouldn’t get to do this:

Twitch, the streaming platform that lets you broadcast your game as you play it so friends or others can watch, comes as default on the PS4 and will arrive on the XBox One in early 2014. There are a series of achievements that can be unlocked just for sitting and watching other people play games, for hours on end. The aim is to get you sitting in front of your console and TV as much as possible, and let Microsoft quantify that.

While the Kinect won’t be watching to make sure that you’re watching it, there are patents for that kind of functionality. They come with diagrams that truly are works of dystopian fiction: 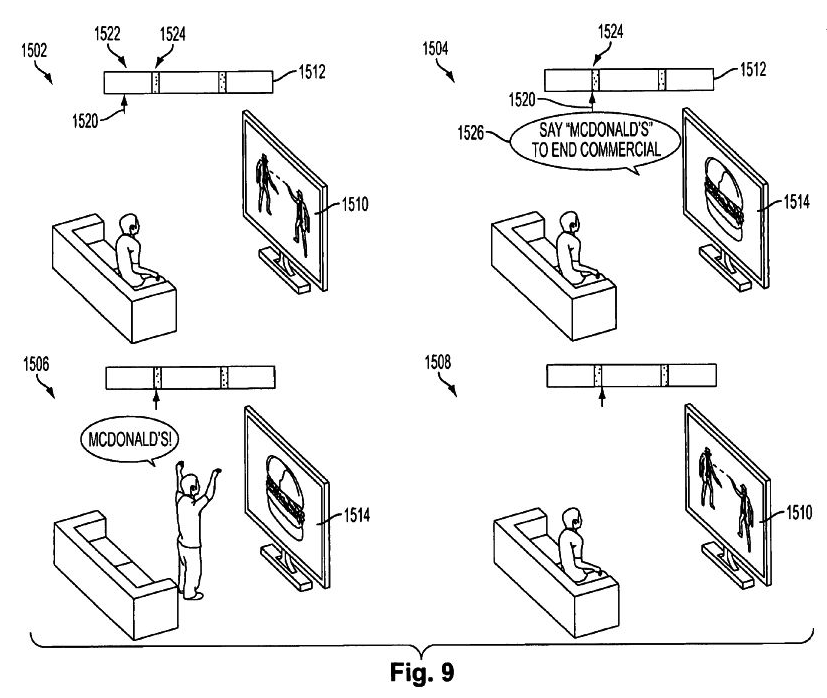 This isn’t to say that the Xbox One is part of a sinister plot, or conspiracy, of any kind – it’s just that it is a nice example of the ways we can be convinced to trade our privacy for certain things, and how a series of small judgements that individually feel negligible can add up to a more serious long-term issue.

Once voice and gesture control, or the convenience of being signed in automatically by a camera, becomes a mundane thing, it becomes easier to slip in other things – maybe not for this generation, but for the one after it. Adverts between shows for products mentioned by the characters, or maybe eventually adverts for products that you were talking about with your friends. Those warnings at the beginning of films that the version you’re watching is only licensed for home use – not for schools, or prisons, or oil rigs – will actually mean something if a camera can tell you have too many people watching at once.

It makes it harder to protect our privacy, to stop that blurring of what part of your life is yours and what part belongs to others. Having our picture taken doesn’t mean that a part of our soul gets caught inside the photo, but having our picture recorded, quanitified, monetised by third-party advertisers, and cross-referenced with other networks so that private companies know exactly how to tailor their products to you, well, that would feel intrusive. We might not realise the steps we’ve tacitly taken to reach that point.