First, full disclosure: I consider myself friendly with, but not friends with, the writer Kieron Gillen and artist Jamie McKelvie, who are the creators of this comic. They might perhaps refer to me, in turn, as “that woman who appears when we are in the pub”. I don’t consider myself to be compromised as a reviewer, however, because I enjoy situations where I get to insult their work.

Bearing that in mind, reading this series has been the first time where I’ve been surprised by how good they are. Please don’t tell them I said that.

In order to demonstrate the sheer effervescent energy of Gillen and McKelvie’s Young Avengers Issues 1-9, here are a few things they have in common with Ke$ha tracks:

2) The elated chorus of ‘we were born to break the doors down, fight until the end’ is something that every single McKelvie-drawn clean-lined superhero popstar practically screams;

3) In the very first page of Young Avengers, Kate Bishop wakes up in a hot alien guy’s bed, and feels like P Diddy. She grabs her clothes, runs out the door, and commences participating in a neon space battle;

4) Gillen’s Whedonesque overconfidence transmits an incredibly strong feeling that the characters R Who They R and anyone who doesn’t like it can take a bath in a tub full of glitter;

Young Avengers is a book about some young misfit superheroes who are flung together to clean up a mess one of them created by accident. You’ve got Hawkeye Kate Bishop; Hulkling, ‘shape shifting alien hybrid guy’; Loki, the god of mystery (Gillen just finished writing his Journey Into Mystery comics); Marvel Boy (banished Kree music lover and semi-naked dancer); Miss America, mysterious interdimensional kicker of butt; Wiccan, angsty chaos magic user (my crush); and recent recruit, Prodigy, who knows pretty much everything. The whole feeling of the book is of a morning after someone you know has trashed their parents’ house, and they’ve clawed together a sigh of hungover associates to help them clean it all up. Only all those friends are neon-cool and glitter-fantastic, and recover from hangovers irritatingly quickly. One even wears a cape.

Of course, of primary concern is the fact that all of them are far more into making out with each other and eating Korean barbecue than solving the problem, which this time is that Billy (superhero moniker Wiccan – and he is not even a pagan) has summoned up evil dimension-hopping impostors of each of the Young Avengers’ parents by accident. Much of the book is, characteristic of the creators, preoccupied with the sexy: every issue is populated by semi-naked Avengers dancing, kissing, or otherwise lamenting the fact that they are not naked and kissing. In between there are some fight scenes.

One of Hawkeye’s very first actions in the comic is to take hold of the unfamiliar wheel of an alien spaceship. It moulds into the shape that she wants it, warping itself to fit her hands. She commences to make things happen. This is entirely what this comic is to the creators: it’s a virile little Corvette that has just been waiting there in the parking lot for a stern hand and bit of a twitchy pedal foot.

I’ve read Gillen and McKelvie’s Phonogram, the last project they worked on together, and though I liked it – Singles Club is evocative of a too-close-to-home twenty-something turmoil – there’s still something very restrained about those comics. Now that I go back to them, they seem meticulously planned and executed, as if Gillen’s vision has imprisoned them in a glass case. It seems it took Marvel to put out a call (not a Batsignal, that would be gauche of me) to have this team negotiate their way into making the Young Avengers book they wanted. It is as if Marvel had unleashed some sort dormant power in both writer and artist, where they’d all of a sudden gone: ‘Right, we got what we wanted: we got to work together on a Marvel superhero book about teens,’ and then commenced evil cackling in a manner that all bystanders might have taken a step back. They took the wheel, and started lasering shit up.

The pinnacle of this chemistry is clear in the double page spreads that allow McKelvie to, for all intents and purposes, entirely show off.

Issue four has a double pager that illustrates pretty-boy alien Noh-Varr’s progress through a nightclub full of enemies: from his dramatic entrance smashing through the club’s window, to his changing the record to Candi Stanton’s Young Hearts Run Free, to his final triumphant exit, it’s SMASH, HIT, SMASH, HIT, his boot through enemies across the isometric diagram. 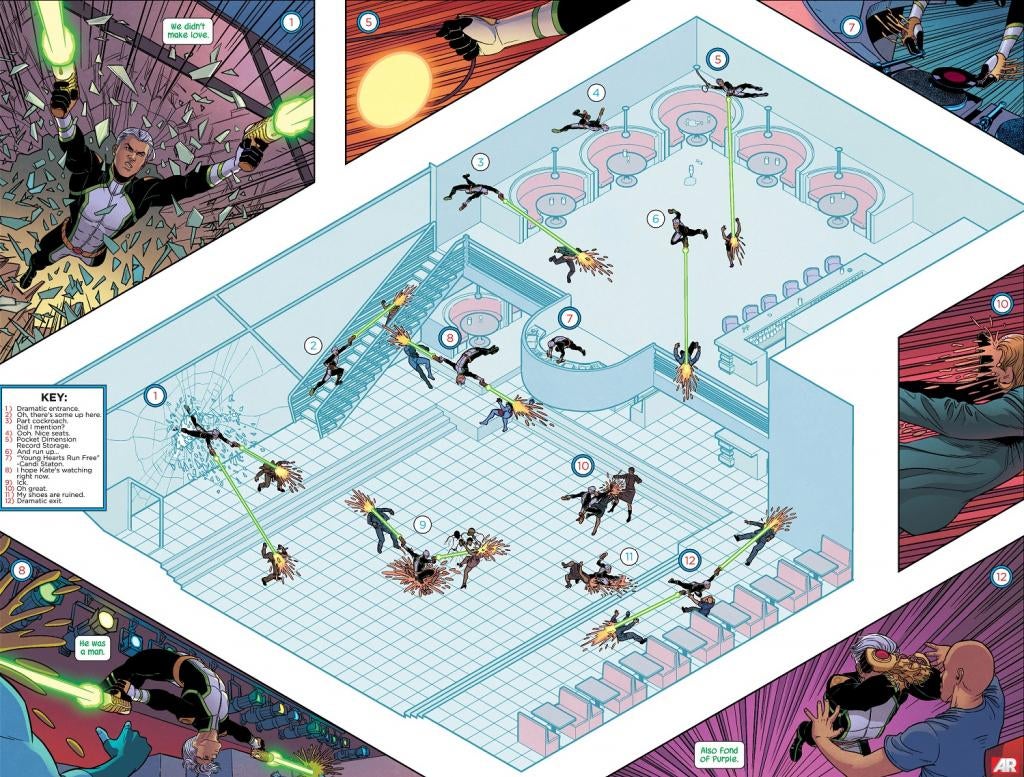 The collaborative epic was hatched by Gillen and spearheaded by McKelvie, iterated throughout the team: around the edges there was room for close ups of Marvel Boy’s clashes. Then Gillen realised there was room for a key on the diagram, where he added more lines: Noh Varr’s exclamations of disgust at his shoes getting mucky, and thoughts hoping that Hawkeye is watching (his newest crush). The whole diagram is a spectacular illustration conveying movement and humour; a microcosm of the run of Young Avengers so far. Exuberant peacocking. A ‘look what we can do’ in two pages of action.

But my emphasis on pop music and kissing in the previous paragraphs might give the impression that this series is “Style > Substance”, just as the comic boldly states in the very first issue. This couldn’t be further from the truth: just as Joss Whedon somehow manages to craft his characters into believable, complex adults with juvenile senses of humour, Gillen weaves pop culture jokes through the angst and concern of his teen idols, addressing sensitively the issues of gay teenage romance, latent queer desire, love triangles, heartache and loss. Kate’s momentary contemplation on whether she should feel shame at a one night stand in the very first page of the series is an important fuck you to conservative social mores: of course she shouldn’t be ashamed of her own desires. Her young heart: it runs free. And the young man she has bedded respects that, and has the cutest ass I’ve ever seen. The only line I winced at was Noh Varr’s quip ‘COME WITH ME IF YOU WANT TO BE AWESOME’.

Miss America and Loki are two prickly characters that up until issue 9 have been bickering like an old married couple, their stories and motives as yet hidden and their discomfort with each other palpable. We’ve got that unravelling to look forward to, if Gillen is generous. But for now, know this: this series is like pouring Pop Rocks into your mouth and sloshing Coca Cola in after it. You’re in for a grinning mouth full of love.