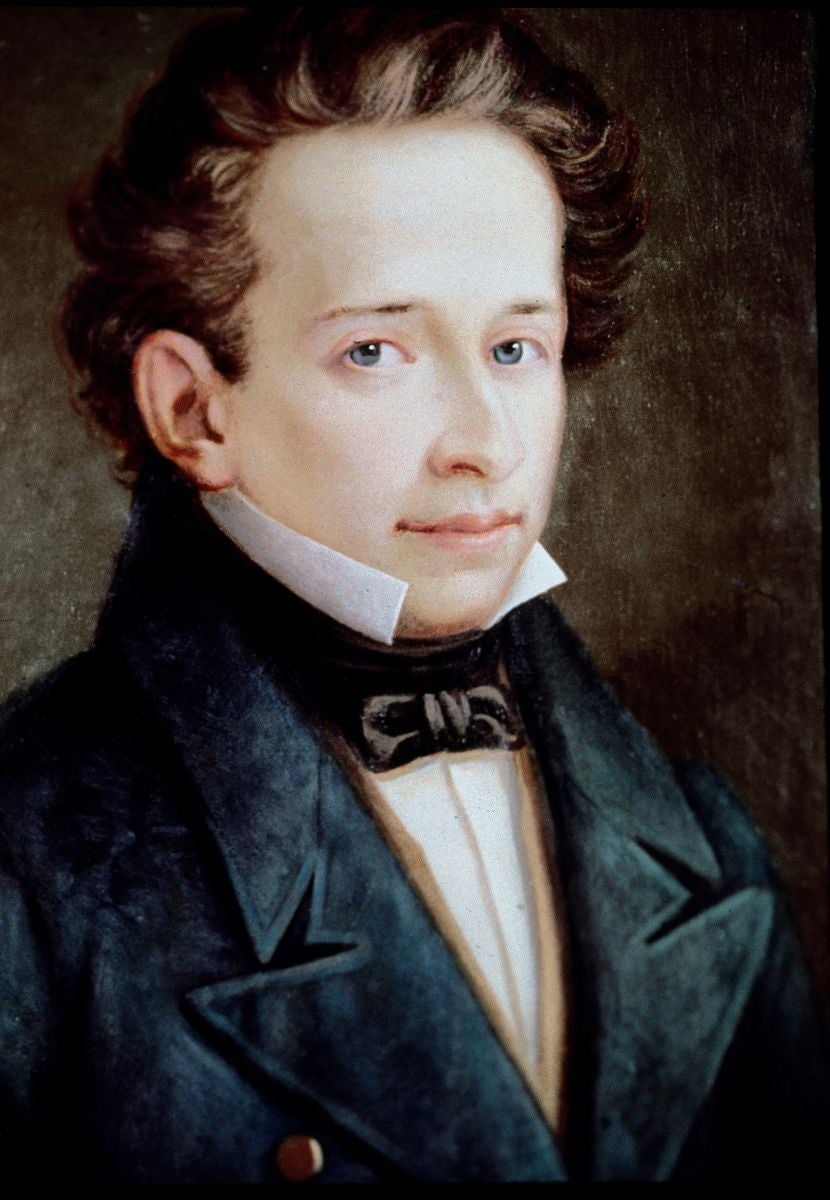 Science and illusion: Giacomo Leopardi was an
unsparing interrogator of modern ideals.
Detail from a painting by Ferruccio Ferrazzi

Giacomo Leopardi (1798-1837) has been remembered as a poet who produced delicate verse inspired by a melancholy version of Romanticism, along with some sharp epigrams on the discontents that go with civilisation. This was always a crude view of the early- 19th-century Italian writer. Leopardi’s subtle sensibility eludes conventional intellectual categories and the true achievement of this subversive genius has been little recognised.

The Death of Consensus: the recurring nightmares of British politics

With astonishing prescience, he diagnosed the sickness of our time: a dangerous intoxication with the knowledge and power given by science, mixed with an inability to accept the humanly meaningless world that science has revealed. Faced with emptiness, modern humanity has taken refuge in schemes of world improvement, which all too often – as in the savage revolutions of the 20th century and the no less savage humanitarian warfare of the 21st – involve mass slaughter. The irrationalities of earlier times have been replaced by what Leopardi calls “the barbarism of reason”.

Even in his native country, Leopardi has not received the recognition he deserves as a thinker. Though a selection of his aphorisms appeared not long after he died in 1837, during a cholera epidemic in Naples, the Zibaldone – a “hotchpotch of thoughts” – was not published in full in Italian until 1898, the centenary of his birth. Composed in secret and meant as a series of memos to himself, the notebook has something in common with Pascal’s Pensées and Kierkegaard’s diaries but the voice – refined, detached and betraying a reticent intellectual passion – is Leopardi’s alone. Beautifully rendered into English by seven translators, superbly edited and annotated by Michael Caesar and Franco D’Intino under the auspices of the Leopardi Centre at the University of Birmingham, with its more than 2,500 pages elegantly printed on thin, Bible-like paper, this is not just a triumph of scholarship but a work of art of which its author could have been justly proud.

The first full English version of the Zibaldone is a major event in the history of ideas. With its publication, Leopardi will be ranked among the supreme interrogators of the modern condition. Originally comprising some 4,500 handwritten pages, this huge text is a methodical dissection of the ruling myths of the new world that was emerging around the solitary young man. Much of it was written when he was in his early twenties, in his family home in the small hill town of Recanati, in one of the most old-fashioned papal states, where his bookish father dressed in black and still wore the sword that symbolised his princely caste. Developing a hunchback from spending his days crouched in his father’s library, where he devoured ancient texts and taught himself Greek and Hebrew, Leopardi spent most of his life thinking, reading and writing. Unfortunate in his relations with women and forming few enduring attachments aside from a difficult three-year involvement with a married Florentine beauty, suffering several spells of poverty along the way, he spent his last years living in the house of a close male friend in Naples.

The frail and sickly poet was also a thinker of intrepid bravery who produced one of the most unsparing critiques of modern ideals. Crucially, this was the work of a quintessentially modern mind – one that looked to the bottom of modern civilisation and found there nothing but conceit and illusion. An anthropologist of modernity, Leopardi stood outside the beliefs of the modern age. He could never take seriously the faith in progress: the notion that civilisation gradually improves over time. He knew that civilisations come and go and that some are better than others – but they are not stations on a long march to a better world. “Modern civilisation must not be considered simply as a continuation of ancient civilisation, as its progression . . . These two civilisations, which are essentially different, are and must be considered as two separate civilisations.”

His sympathies lay with the ancients, whose way of life he believed was more conducive to human happiness. A product of the increase of knowledge, the modern world is driven by the pursuit of truth; yet this passion for truth, Leopardi suggests, is a by-product of Christianity. Before Christianity disrupted and destroyed the ancient pagan cults with its universal claims, human beings were able to rest content with their local practices and illusions. “Mankind was happier before Christianity than after it,” he writes.

Christianity was a reaction against corrosive doubt, a condition that took hold partly as a result of the habit of sceptical inquiry inculcated by philosophy: “What was destroying the world was the lack of illusions. Christianity saved it, not because it was the truth but because it was a new source of illusion.” This new illusion came in the form of a claim to truth that all the world had to accept: an inordinate demand that with the rise of the Enlightenment shifted to science, which has become a project aiming to dissolve the dreams in which humanity has hitherto lived. The result is modern nihilism – the perception that human beings are an insignificant accident in a scheme of things that cares nothing for them or their values – and a host of rackety creeds promising some kind of secular salvation.

Leopardi’s account of the paradoxical process whereby a Christian will to truth gave birth to nihilism has much in common with Nietzsche’s – an affinity that the fiery German thinker recognised. Here as elsewhere, Nietzsche was following a path opened up by Schopenhauer, who wrote that it was a tragedy that the world’s three great pessimists – “Byron, Leopardi and myself” –were in Italy at the same time but never met. (I’m not sure that a meeting between Leopardi and Schopenhauer would have been a success. Unlike Schopenhauer, who lamented the human lot, Leopardi believed that the best response to life is laughter.)

What fascinated Schopenhauer, along with many later writers, was Leopardi’s insistence that illusion is necessary to human happiness. Matthew Arnold, A E Housman, Herman Melville, Thomas Hardy, Fernando Pessoa (who wrote a poem about the Italian poet) and Samuel Beckett were all stirred by his suggestion that human fulfilment requires a tolerance of illusion that is at odds with both Christianity and modern science. A version of the same thought informs the work of Wallace Stevens, perhaps the greatest 20th-century English-language poet, who saw the task of poetry as being the creation of fictions by which human beings can live.

Unlike philosophers today, Leopardi aims to do more than provide a comforting justification for the intuitions of well-meaning liberals. Just as much as Nietzsche, though much more soberly, he is a critic of modern ethics. Leopardi found the unthinking moral certainty of secular thinkers highly questionable, not least because of their hidden debts to Christianity. In an irony of which he was undoubtedly aware, this opponent of the Enlightenment ideal of reason was in many ways a child of the Enlightenment, not least because he shared the Enlightenment suspicion of Christianity.

Yet Leopardi’s resistance to Christianity was not simply, or even mainly, an intellectual objection to its theological claims. It was a moral objection, which applied equally to the secular successors of Christianity. He criticised Christianity not because he believed it to be untrue (he accepted that human beings cannot live without illusions) but because he saw the militant assertion of its truth as being harmful to civilisation. The universalism of which Christianity and its humanist offshoots are so proud was, for Leopardi, an openended licence for savagery and oppression.

Leopardi was emphatic in affirming the constancy of human nature and the existence of goods and evils that are universally human. He was far from being a moral relativist. What he rejected was the modern conceit that aims to turn these often conflicting values into a system of universal principles – a project that fails to comprehend the irresolvable contradictions of human needs. “No one understands the human heart at all,” he wrote, “who does not understand how vast is its capacity for illusions, even when these are contrary to its interests, or how often it loves the very thing that is obviously harmful to it.” Modern rationalists imagine they do not succumb to this quintessentially human need for illusion, but in reality they display it to the full.

Assessing the impact of Christianity on the ancient world, Leopardi notes that the more that universal principles are accepted as the basis of action, “the worse peoples and centuries prove to be”. The crimes that Christians in the Middle Ages committed were “quite different, more horrible and more barbarous than those of antiquity”. Long before the atrocities of the modern era,he perceived that such crimes, like those of the medieval Christians, emanated from belief, not passion. From late-19th-century imperialism to communism and the incessant wars launched in our time under the gaudy banner of democracy and human rights, the most barbarous kinds of violence have been promoted as rational means to achieving a higher civilisation. Even the Nazis believed their crimes were based in reason: genocide and “scientific breeding” would lead to a type of human being superior to any that had existed before. The barbarism of reason is the attempt to order the world on a more rational model. However, evangelists for reason are more driven by faith than they know and the result of attempting to impose their simpleminded designs on the world has been to add greatly to the evils to which human life is naturally prone.

Some will find Leopardi unsatisfying because he proposes no remedy for modern ills, but for me a part of his charm comes from how he has no gospel to sell. The Romantic movement turned to visions of natural harmony as an escape from the flaws of civilisation. With his more penetrating intelligence, Leopardi understood that because human beings are spawned by natural processes, their civilisations share the ramshackle disorder of the natural world. Brought up by his father to be a good Catholic, he became a resolute atheist who admired ancient pagan religion; but because it was not possible to return to the more benign faiths of ancient times, he was friendly to Christianity in his own day, seeing it as the lesser of many evils: “Religion (far more favoured and approved by nature than by reason) is all we have to shore up the wretched and tottering edifice of present-day human life.”

Realising that the human mind can decay even as human knowledge advances, Leopardi would not have been surprised by the stupefying banality and shallowness of current debates on belief and unbelief. He accepted that there is no remedy for the ignorance of those who imagine themselves to be embodiments of reason. Today’s evangelical rationalists lag far behind the understanding of the human world that he achieved in the early decades of the 19th century.

Yet it is hard to think of Leopardi being disconsolate because of this. Quietly dictating the closing lines of one of his most exquisite poems, “The Setting of the Moon”, as he lay dying in Naples, he seems to have seen his short life as being complete in itself. On the evidence of this magnificent volume, he was not mistaken.

John Gray is the New Statesman’s lead book reviewer. His latest book, “The Silence of Animals: on Progress and Other Modern Myths”, is published by Allen Lane (£18.99)