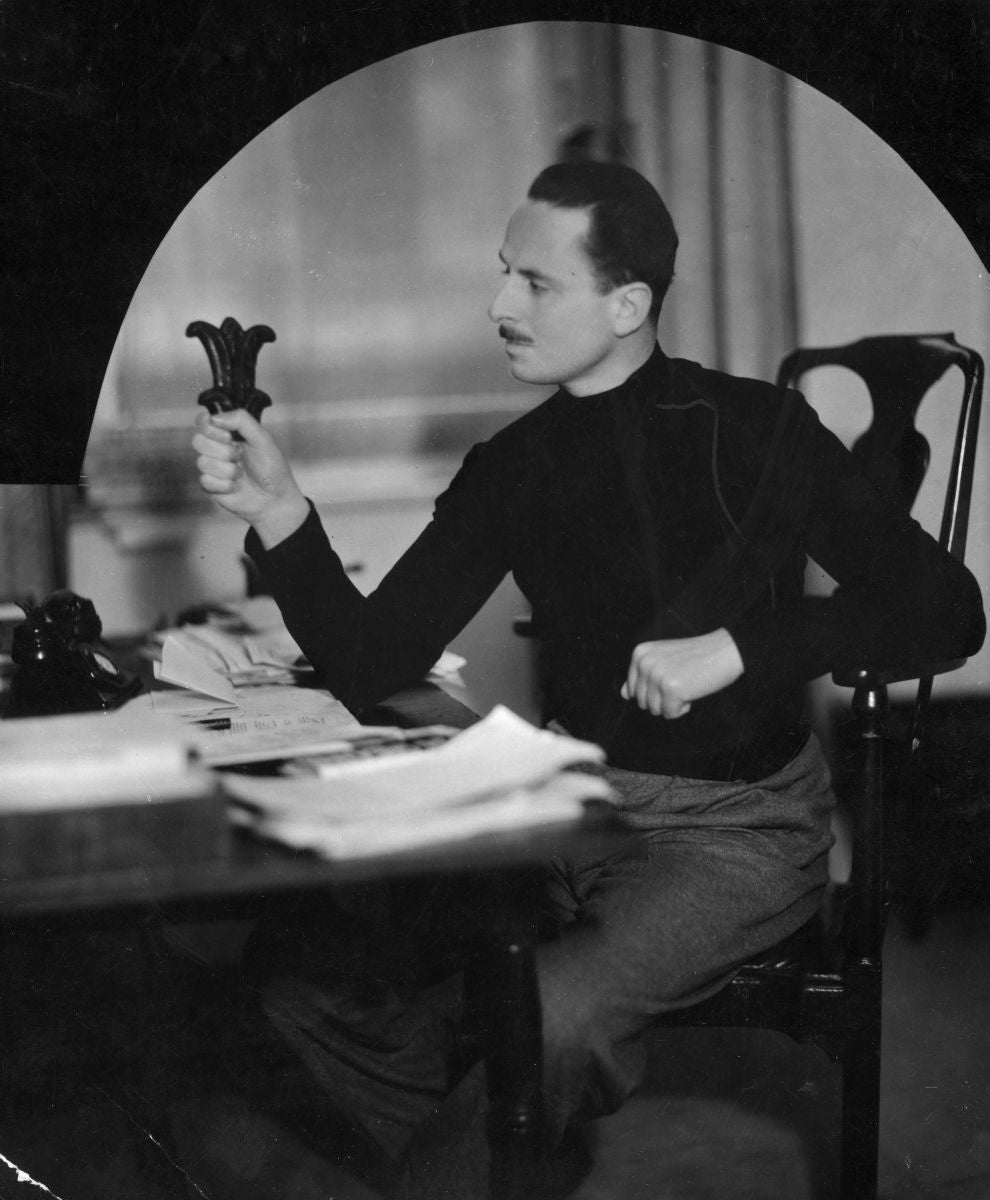 Grandiose ambition: Mosley, pictured here in 1936, held sway over sections of working- and upper-class Britain long after the end of the war. Photograph: William Davis/Hulton/Getty Images.

Researching the position of the New Statesmanon the Cuban missile crisis, I came across a paragraph in a London Diary about Oswald Mosley written by Malcolm Muggeridge in August 1962. He had just interviewed the former British fascist leader for BBC Television and his impressions were dismissive:

“He struck me as being an earnest, rather humourless man; a bit of a bore, but in no way abhorrent; just rather dreary, like a Jehovah’s Witness, or one of those figures one meets in out-of-the-way places who produce a cyclostyled plan for world government which they have sent to Adlai Stevenson, Mrs Roosevelt and the late Duchess of Atholl.”

Saint Mugg was wrong, quite wrong about Mosley. He was both charismatic and dangerous. His eldest son, Nicholas, stood by him until the general election of 1959, when he watched his father’s campaign for the Union Movement in North Kensington degenerate from exciting new ideas about European socialism into the usual rabble-rousing over race – in this case, the repatriation of West Indians. As he wrote, unforgettably, “I see clearly that while the right hand dealt with grandiose ideas and glory, the left hand let the rat out of the sewer.”

Muggeridge’s BBC interview had not been broadcast because Hugh Carleton Greene, the director general, was so aware of the malign influence of the man that he vowed “Mosley will only appear on the BBC over my dead body”. It is worth noting, too, that in 1962 the Union Movement was at the height of its popularity, with as many as 15,000 sympathisers.

I got to know Mosley in the last few years of his life, beginning with a chilling encounter at the hubristically named “Temple de la Gloire” on the outskirts of Paris, where he lived with his wife, Lady Diana (née Mitford). I was doing research for a BBC radio documentary on the notorious Olympia rally of 1934 and I hoped to record Mosley reciting the opening lines of his two-hour speech. He needed no second bidding. He knew them by heart. I crouched in a corner, imagining the Nuremberg rally scenario as described by Philip Toynbee, who had been there:

“Olympia was nearly full – tier upon tier of the curious and the enthusiastic, and the enthusiastic in great majority. In every open space, at the end of every row, stood black-jerseyed stewards with hands on hips, complacent and menacing. The seats had been full for many minutes before hidden trumpets sounded a fanfare, and the Leader strode into the arc-lights. He was flanked by four blond young men, and a platoon of flag-bearing Blackshirts followed in their wake . . . Sir Oswald had stood at the rostrum for at least two minutes of this din, before his own arm rose, formidably, to command silence.”

The old Sir Oswald (he was now 80) stood defiant at the other end of the room, seemingly suffused with the power of his oratory. His eyes, ice blue with age, glared round the room as if roaming the huge, tiered amphitheatre of Olympia. He bellowed:

“This great meeting, the largest ever gathered under one roof in Great Britain, is the climax of a national campaign in which audiences have assembled in every great city of this land . . . This movement represented here tonight is something new in the political life of this country, something that goes further and deeper than any other movement this land has ever known.”

Then he paused as if anticipating what happened next. I eventually learned exactly what had happened next, because days before the broadcast I was contacted by the self-titled archivist of the British Union of Fascists. Had I heard the whole Olympia rally on disc recorded at the actual event? No historian knew this existed. I hurried to a flat in Southgate in north London, bought two 15- inch discs for £40 and presented them to the British Library Sound Archive.

The “Battle of Olympia” was a set piece of fascist violence provoked by communist heckling, storm troopers against guerrilla fighters. It misfired, of course. The left-wing journalist Fred Mullally said: “It was like seeing the beast unchained coming at you with red claws and snarling teeth. That night Mosley must have lost thousands of potential sympathisers.”

He did. Lord Rothermere withdrew the support of the Daily Mail, right-wing Conservative MPs kept their distance and the Night of the Long Knives in Germany three weeks later linked British fascist brutality irretrievably with Nazi killers. Olympia was the beginning of the end of fascism in Britain. “Blackshirt Man” and “Rothermere Man” were incompatible.

Mosley did not see it like that. Could he, he asked rhetorically as he showed me round the Palladian-style garden, have done more to keep Britain out of the Second World War? And what was the point of going to war over Poland, particularly as the real enemy was Soviet communism? He must have rehearsed these arguments to himself many times over the years, starting in 1940 as he sat in Holloway Prison.

He was hurt to be called a traitor. He told me that although he had opposed the war, if Germany had invaded Britain he and his fellow fascists would have fought the foreign invader “with all that is in us; we must never surrender an inch of British territory”. Indeed, he had fought bravely in the Great War. Had Hitler conquered Britain in 1940, he went on, then many politicians would have collaborated, beginning with the former prime minister David Lloyd George. High treason, he argued rightly, was attempting to overthrow one’s government, but could not apply after that government had been overthrown.

We ate in the garden under a hot sun: Sir Oswald and Lady Diana, Lord and Lady St Just, who were connected to the Guinness family into which Diana Mitford had first married, and me. Their faithful Irish butler, Jerry, waited on us. My discomfort increased at the end of the meal when Lady Diana turned her steady gaze on me and asked, out of nothing, “How many Jews do you think perished in the war?”

At least I had the presence of mind to answer: “The estimate is about six million.”

“Ah,” she said and, after a pause: “Would you like a swim?” She pressed a bell under her foot and summoned Jerry. “Please bring a pair of Sir Oswald’s swimming trunks. They will fit Mr Purcell.”

He did so and offered them to me on a silver salver. This was obviously my chance to escape. Before I disappeared through the bushes towards the pool I noticed that Sir Oswald had a slight smirk on his face – or did I imagine it? – as he helped himself to the Napoleon brandy.

I met the Mosleys several more times over the following four years. I must have been on a list of journalists whom they invited to their flat in Chelsea to hold “conversations”. Afterwards we would be supplied with a broadsheet elaborating Sir Oswald’s thoughts on matters of the day. He no longer saw himself as a Man of Destiny – presumably he had passed his white charger to Enoch Powell – but he did think he had ideas to contribute to the public domain. Here was a leader who had been an heir apparent of both the Tory and the Labour parties half a century earlier but who was now an outcast in his old age. His frustration channelled a still abundant physical and mental energy. “Obviously,” he once said to me, “like other Englishmen I am ready with my compatriots, wherever they may be, to serve our country.”

One of his favourite “conversations” was his design from the 1960s of a new European socialism. His 1962 “Declaration of Venice”, signed with a number of far-right Italian, Belgian and German politicians, proposed a common government for Europe elected by a free vote and covering foreign and fiscal policy. This noble ambition had a unique extension to the African continent. Sub- Saharan Africa would be divided in a true “apartheid”, two-thirds black and one-third white. The black nations would provide raw materials to Europe and serve as a market for European manufactured goods. This system of autarky (a favourite fascist concept) would allow Europe to pull out of world markets and be self-sufficient.

And then there were “the rats let out of the sewer”. I remember a party, held at the Eccleston Square Hotel in Victoria, London, by the Action Party (successor to the Union Movement), in honour of Mosley. It must have been in the late 1970s, just before his death. Now frail and slow, he smiled wanly and extended his hand. Mosley always flattered his followers, however racist and belligerent they were, and there were plenty there that night: beery meat porters from Smithfield Market who had not long before marched on parliament in defence of Enoch Powell, and neo-Nazis of the National Front.

Oswald Mosley died on 3 December 1980. His final message to the British people appeared in a letter to the New Statesman written only a week earlier. It was about the Olympia rally. Mosley had taken exception to an article in which the former lord chancellor Gerald Gardiner had compared the violent ejection of Socialist Workers Party members from the Tory party conference that October with Olympia – “an assault which nothing can justify”. The NS printed Mosley’s letter in a box under the introduction: “Throughout his life he [Mosley] was intent on persuading people that their view of history was mistaken.”

Oswald Mosley was cremated at the Père Lachaise cemetery in Paris. I was producing his obituary for BBC Radio 4 so I went along with the late Colin Cross, the author of The Fascists in Britain. Arguably, journalists have no place at funerals and as usual I felt out of place in Mosley’s company. It was, however, a historic gathering of Europe’s fascist remnants, perhaps the last. Looking at the signatures in the book of those paying their last respects, I noticed Adolf von Thadden, a one-time chairman of the Deutsche Reichspartei, and Giorgio Almirante, the former Italian fascist and leader of the Italian Social Movement (MSI) in its early days. From the UK came the ever-faithful Jeffrey Hamm, guardian of the Mosley flame, and the Bailey brothers, the acceptable face of East End fascism since the 1930s.

If we had expected a phalanx of old fascists guarding the coffin and communists shouting abuse at the gates, we were mistaken. It was a sombre, low-key funeral. Colin Cross, who had enjoyed a good Parisian lunch, brought me down to earth from the uplifting strains of Fauré’s “In Paradisum” by muttering in a loud voice: “At least he hasn’t been strung up by his heels.”

We left by a side entrance.

To the Editor of the New Statesman

In your issue of 21 November there was a reference to my Olympia meeting. The simple facts have often been published without disproof. The largest audience ever seen at that time assembled to fill the Olympia hall and hear the speech. A small minority determined by continuous shouting to prevent my speech being heard. After due warning our stewards removed with their bare hands men among whom were some armed with such weapons as razors and knives. The audience were then able to listen to a speech which lasted for nearly two hours.