Like every other industrious autodidact growing up in the 1970s and 1980s, I dutifully slogged my way through piles of glutinous, creamcovered Picadors, dour blue Penguins and Pelicans and every other worthy-looking thing available through the Essex County library system, in the belief that the consumption of vast quantities of rich, thick, self-improving stodge might train my poor, uneducated palate. It was as if eating hors d’oeuvres, oxtail soup, poached turbot and saddle of mutton would somehow turn me into a polymathic, teenage Peter Ustinov, who– to my naive, Parkinson-formed mind – more clearly represented the rounded figure of the public intellectual than any real public intellectual such as Keith Joseph, Kenneth Clark or Noam Chomsky.

At the same time as I supped at the altar of what I imagined to be “high culture”, my actual diet consisted mostly of Findus Crispy Pancakes, Battenberg cake and episodes of Perry Mason, The Avengers, Ironside, Hawaii Five-O, Starsky andHutch, Cannon, McCloud, Columbo, Murder, She Wrote, Kojak, Quincy, Van der Valk, The Sweeney, The Rockford Files, Magnum, PI, Charlie’s Angels, Juliet Bravo, Moonlighting, Miami Vice, The Bill, Bergerac and Taggart – and they say there’s too much crime on telly today.

Even into my twenties and thirties, I remained partial to Heinz Big Soup, Twiglets, butterscotch Angel Delight, Wycliffe, A Touch of Frost, Midsomer Murders, Dalziel and Pascoe, Hetty Wainthropp Investigates and Heartbeat. I was in torment. I wanted to live the life of the mind; my body craved the sweet, dark comforts of crime.

The ancient Manichaean universe that I inhabited, in which a taste for the “great tradition” necessarily excluded an appreciation of mass, pulp and pop culture, was the accepted reality until very recently. It was clearly instantiated in newspaper review pages, where most crime novels were lucky to be included in a barrel-scraping round-up: “Oh, by the way, here are half a dozen other books, not for the likes of us, you understand, but popular with the general reading public.” But so popular has crime fiction become, generating about £90m in UK book sales each year, that it’s now arguably the main course rather than a side order or an amuse-bouche.

This may or may not be a good thing. These days, you can comfortably inhabit the world of eccentric amateur detectives and embittered private eyes all year round, in the company of learned fellow travellers, on television, at the cinema, in books and online. There are murder mystery weekends and endless box sets; in classrooms, at conferences and on college campuses, it is now de rigueur for undergrads to study crime fiction and its relationship to feminism, post-colonialism and critical theory, just as I once had to sweat my way through Troilus and Criseyde and the meaning of courtly love. At City University in London, you can now study for an MA in crime thriller novels. Doubtless at a certain point, even Michael Gove will capitulate and make Elmore Leonard his grammar tsar. The underground has become the mainstream.

Just to recap, for those few who haven’t been paying attention or who haven’t had the chance to study, say, module EAS3217 (“Crime and Punishment: Detective Fiction from the Rue Morgue to the Millennium”) at the University of Exeter or EN658 (“American Crime Fiction”) at the University of Kent: Edgar Allan Poe invented detective fiction in 1841 with his short story “The Murders in the Rue Morgue”, then Wilkie Collins wrote The Moonstone (1868), then along came Sherlock Holmes and Agatha Christie; America went hard-boiled; and now there’s everything else, including a lot from Scandinavia.

For those interested in arguing the finer points, it’s worth stating that Oedipus Rex is not a detective story (nor is Crime and Punishment, or The Crying of Lot 49), that Scott and Bailey may be better than Cagney and Lacey and, yes, Hugh Laurie’s House was clearly a take on Holmes. The debate still rages as to whether William Godwin’s Caleb Williams (1794) was the first true detective novel, although, having read it, I can guarantee one thing: it is very boring.

There are probably as many theories about the rise of the detective novel as there are Maigret stories, though the good old Marxist explanation proposed by Ernst Bloch is perhaps as good as any. “Why,” he asks in his essay “A Philosophical View of the Detective Novel” (1965), “is the narrator who fishes in murky waters such a recent phenomenon? Above all, why does the detailed hunt for evidence appear at such a late date? The reason is that earlier legal procedures did not depend on it.”

Marx chose not to expatiate on the crime novel, thank goodness, though arguably his entire life and work was a whodunnit – in which an eccentric amateur traced a series of clues, eventually revealing who had committed the crime. In Theories of Surplus Value (1862-63), he does offer this insight: “A philosopher produces ideas, a poet poems, a clergyman sermons, a professor compendia, and so on. A criminal produces crimes . . . [The criminal] renders a ‘service’ by arousing the moral and aesthetic feelings of the public. He produces not only compendia on criminal law, not only penal codes and along with them legislators in this field, but also art, belleslettres, novels, and even tragedies . . . Thus he gives a stimulus to the productive forces.”

It’s certainly one way of looking at crime fiction: as a useful product of the criminal. Another way might be to view it as a necessary by-product of an all-corrosive and corrupting high modernism. As Virginia Woolf determinedly strode off in one direction, away from the crowd, so Raymond Chandler had no choice but to walk the mean streets towards them.

Whatever its origins and antecedents, the satisfactions of the genre seem clear and intense. W H Auden wrote in his essay “The Guilty Vicarage” (1948):

For me, as for many others, the reading of detective stories is an addiction like tobacco or alcohol. The symptoms of this are: firstly, the intensity of the craving – if I have any work to do, I must be careful not to get hold of a detective story for, once I begin one, I cannot work or sleep till I have finished it. Secondly, its specificity – the story must conform to certain formulas (I find it very difficult, for example, to read one that is not set in rural England). And thirdly, its immediacy. I forget the story as soon as I have finished it, and have no wish to read it again. If, as sometimes happens, I start reading one and find after a few pages that I have read it before, I cannot go on.

Alas, Auden’s addict’s defence reads rather like an admission of defeat. If the definition of a classic is that it can be read and reread, detective stories are not classics: these are books that we consume and discard, a kind of “litlite”, a cheeky, between-meals McFlurry or a Peperami. The critic and author Edmund Wilson was of the opinion that crime fiction was virtually worthless – wasted calories – and he waged a one-man campaign against the genre in a series of articles in the New Yorker, complaining that it was a load of old dross and so much sleight of hand. Yet even Wilson had to admit that crime fiction answered some kind of basic human need. Writing in 1944, in the midst of war and disaster, in a world where everybody seemed suspect and no one guiltless, with “the streets . . . full of lurking agents whose allegiances we cannot know”, he acknowledged that there was a satisfaction to be had in the belief that when the murderer was caught, everything was going to be OK, at least momentarily. An illusion, perhaps, but a consolation nonetheless. 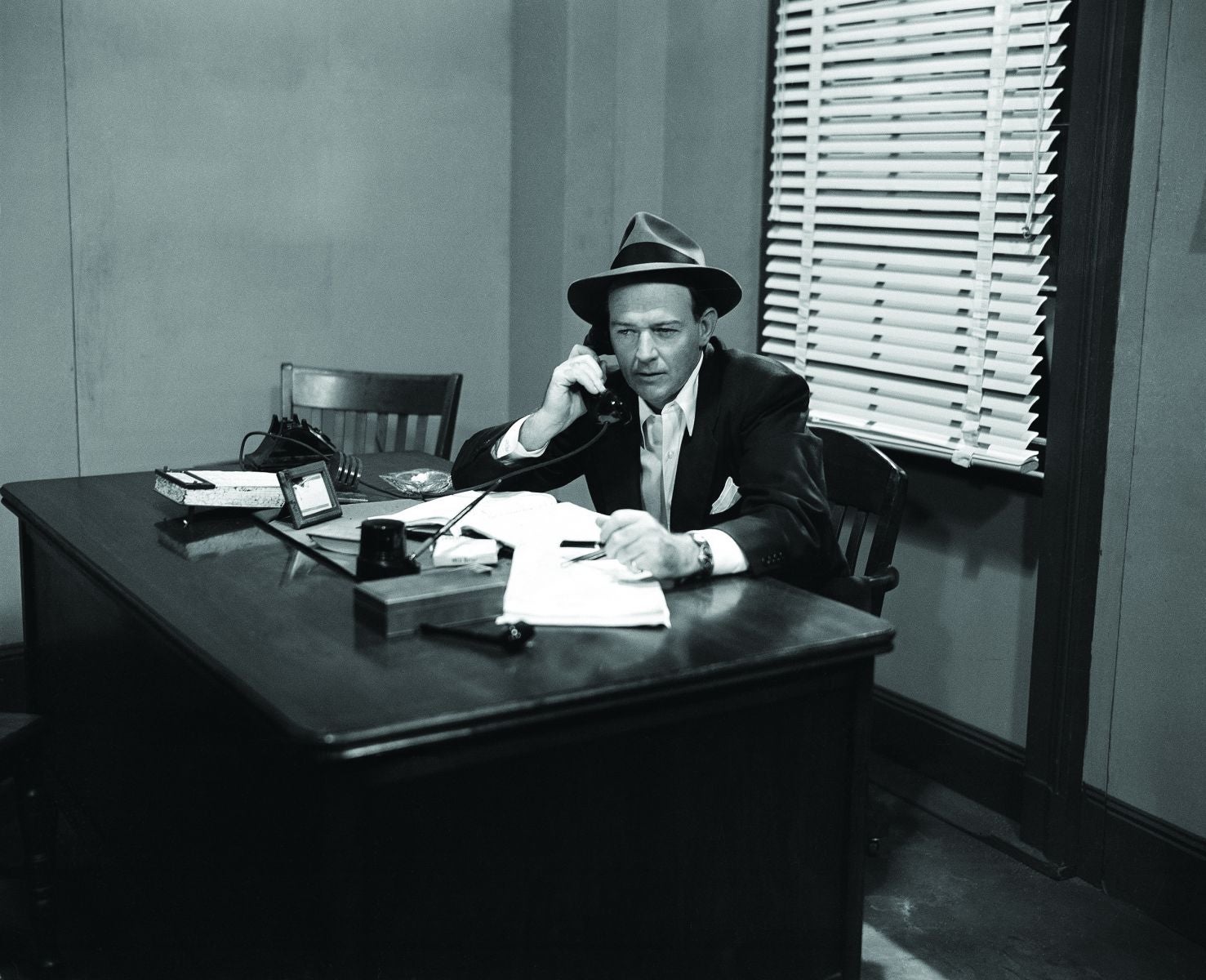 It’s almost impossible to pack for holiday without at least one volume of comforting crime capers.
Photograph: Getty Images

In a world now dominated by vast, mysterious forces that none of us understands or can control, the comforts of crime fiction are perhaps more apparent than ever. In the world of Sherlock (and even of Dexter), evil is identifiable and often explicable. The detective –however deranged, damaged and drugaddled – remains our saviour, or at least the devil we know.

In Paul Auster’s City of Glass (1985), a writer of detective stories called Daniel Quinn is mistaken for a detective called Paul Auster and attempts to navigate his way through a confused world in which the writer is the detective is the reader is – basically – us. “The detective is the one who looks, who listens, who moves through this morass of objects and events in search of the thought, the idea that will pull all these things together and make sense of them.” You hope. G K Chesterton, in his essay “A Defence of Detective Stories” (1901), described crime-solving as an example of “successful knight-errantry”. Enter Sarah Lund, wearing a nice white jumper.

There are yet other consolations to be had from crime fiction. The grey-cell-tickling aspects are perhaps at their most amusing and pronounced in the work of Agatha Christie – and, more recently, in CSI or Criminal Minds. (CSI’s Sara Sidle is Miss Marple with expensive teeth and a degree from Harvard.) However, there are all sorts of other rhythms and patterns apart from the clue-puzzle set-up that have developed in the genre over time and that offer the reader or the viewer similar thrills. There are, for instance, the many postmodern or metaphysical variations on the old themes, in which authors mess around with the conventions and in which the detective may be defeated, clues may be meaningless and the plot may be reversed.

Unsurprisingly, detective fiction exerted a particular fascination for the experimental Oulipo group of writers – Ouvroir de littérature potentielle – who were interested in the ways in which apparent literary constrictions and restraints might be delightfully enabling. The final, unfinished novel by the Oulipian extraordinaire Georges Perec, 53 Days, was intended as a kind of literary thriller, though it’s not recommended if your idea of a literary thriller is one by Lee Child.

I think it was P D James who once remarked that the formula for a successful detective story is 50 per cent good detection, 25 per cent character and 25 per cent what the author knows best. In much recent crime fiction, what the author knows best seems to be torture, rape and mutilation, possibly because many younger authors’ teenage diet, unlike mine, did not consist of BBC adaptations of John le Carré novels or Inspector Morse but rather Reservoir Dogs, Pulp Fiction and Seven. I tend to write what Americans call, rather nauseatingly, “cosy mysteries” and what my British publishers prefer to refer to coyly as “series novels”. I’m a fan of the so-called golden age of detective fiction – that period between the wars when detectives were relatively untroubled, the settings were pleasantly enclosed, romance was rare and murder most foul was not grisly.

Whatever your tastes, if you’re packing your suitcase and are unwilling to risk the gamble of picking something up at the airport, you could do worse than to follow the recommendations of the great David Torrans, the owner of my little local bookshop, No Alibis on Botanic Avenue in Belfast, which just happens to be one the greatest independent bookshops in Europe and certainly the best for crime books in the UK. This summer, Torrans is recommending to his customers The A26 (Gallic Books, £6.99) by Pascal Garnier, Antti Tuomainen’s The Healer (Harvill Secker, £12.99), Bill Cheng’s Southern Cross the Dog (Picador, £12.99) and the second in Sara Gran’s Claire DeWitt series, Claire DeWitt and the Bohemian Highway (Faber & Faber, £12.99). Fine choices, though I’m also packing a second-hand Ngaio Marsh in case of an emergency and downloading some old episodes of Barney Miller on to my iPad, in memory of the good old days.