Near the beginning of the fifth and final series of AMC’s Breaking Bad, Mike Ehrmantraut, a one-time “cleaner” and PI, refuses the offer of a partnership in the soon-to-be-resurrected methamphetamine business of a former high school chemistry teacher turned pathological monster. “You are a time bomb – tick, tick, ticking,” he tells Walter White, who has just become the last meth cook standing in an open market. “And I have no intention of being around for the boom.”

The second half of the final series has just kicked off on Netflix, lighting the charges that will lead us to the programme’s conclusion. In eight weeks’ time we will have witnessed a 46 and a half hour moral drama set to join the pay-per-view television hall of fame alongside the Sopranos, The Wire and a handful of others. Watching the show produces a unique, churning discomfort, as we try to reconcile our feelings for the pitiable Walter White (and even our attraction to his sublime alter ego “Heisenberg”), with the acts he goes on to commit. Audiences often comment on shifting the red line beyond which Walter ceases to be a loveable, if pathetic, science geek and family man, and becomes a megalomaniacal drug lord in a pork pie hat and sunglasses. 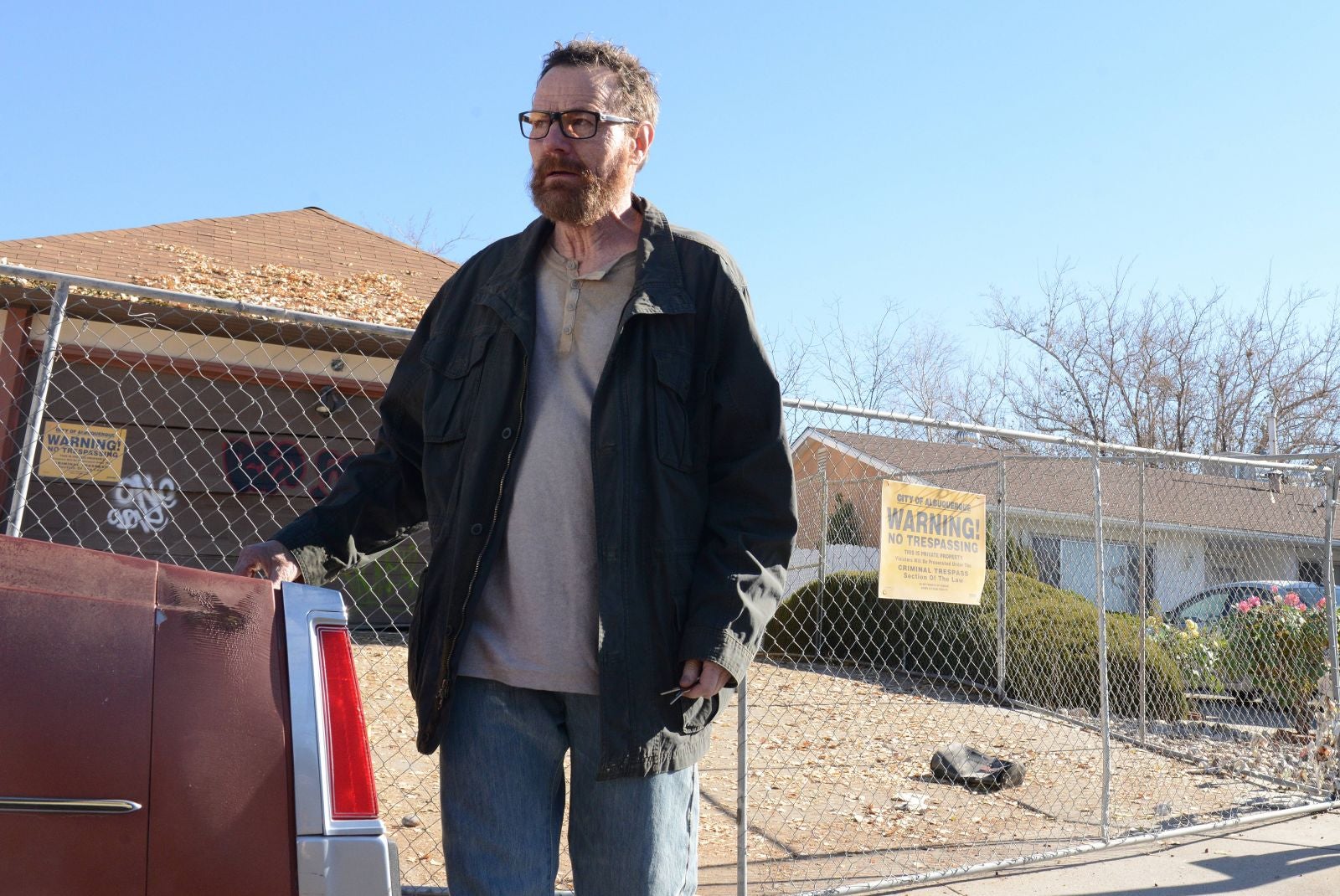 Walter outside his house in the episode prologue. Photograph: AMC.

“Blood Money” begins in the same chronological moment as the series overall. It is Walter’s 52nd birthday and he has just bought himself a machine gun. He has also let his hair grow back. After retrieving the talismanic ricin vial from behind the socket in his now derelict home, he is spotted by his next-door neighbour. “Hi Carol,” Walt says. Carol shrieks and drops her groceries, confirming what we had already fairly assumed: Walter is now a fugitive, with no alternative to work with but a hail of bullets. Creator Vincent Gilligan did promise “Mr Chips to Scarface” after all.

After the credits we are back to where episode 8 left off, as Hank (Dean Norris) finally emerges from the longest crap in television history. He emerges into the full horror of his oversight. The DEA’s finest is now aware that his brother-in-law is the legendary meth cook Heisenberg, though it takes for him to accept it. He painstakingly lines up Gale Boetticher’s handwriting in the copy of Walt Whitman’s Leaves of Grass from Walter’s bathroom with the lab notes taken from Gale’s flat. After another appearance from Carol (“Hi Carol!”) Hank has a panic attack and crashes into somebody’s painted wooden fence. It’s all a bit much for the poor guy.

Meanwhile Skyler (Anna Gunn) and Walt have made a full-time occupation of laundering the many millions Walt earned from his über-pure crystale. Repeatedly in this episode Walt attempts to assert the normality of his affairs – “Have an A1 day” he chirps at customers in the car wash where he once earned extra cash after school – but past darknesses refuse to stay in the past. Into the car wash walks Lydia Rodarte-Quayle (Laura Fraser), to whom Walt bestowed the business after his wife convinced him it was time to quit. She complains that the product’s quality has dropped to 60 per cent, but is chased off the property by a ferocious Skyler White – showing a little Heisenberg of her own. Let’s hope there’s more of that to come.

Hank provides us with a handy little montage of misdemeanours as he collates the evidence against Walt in his garage: Tuco’s body, lab equipment, CCTV footage, photographs of Hector Salamanca and Chow. While our (anti) hero goes about his life, his former partner and surrogate son Jesse (Aaron Paul) tells crooked lawyer Saul Goodman (Bob Odenkirk) that he wants to give away his “blood money”. He is, as before, wracked with guilt. After the inane ramblings of former slinger Badger drive him from his house, he tells Saul to give $2million to the parents of the Drew Sharp (the boy who died after the methylamine train heist) and $2million to Mike’s granddaughter Kaylee Ehrmantraut. 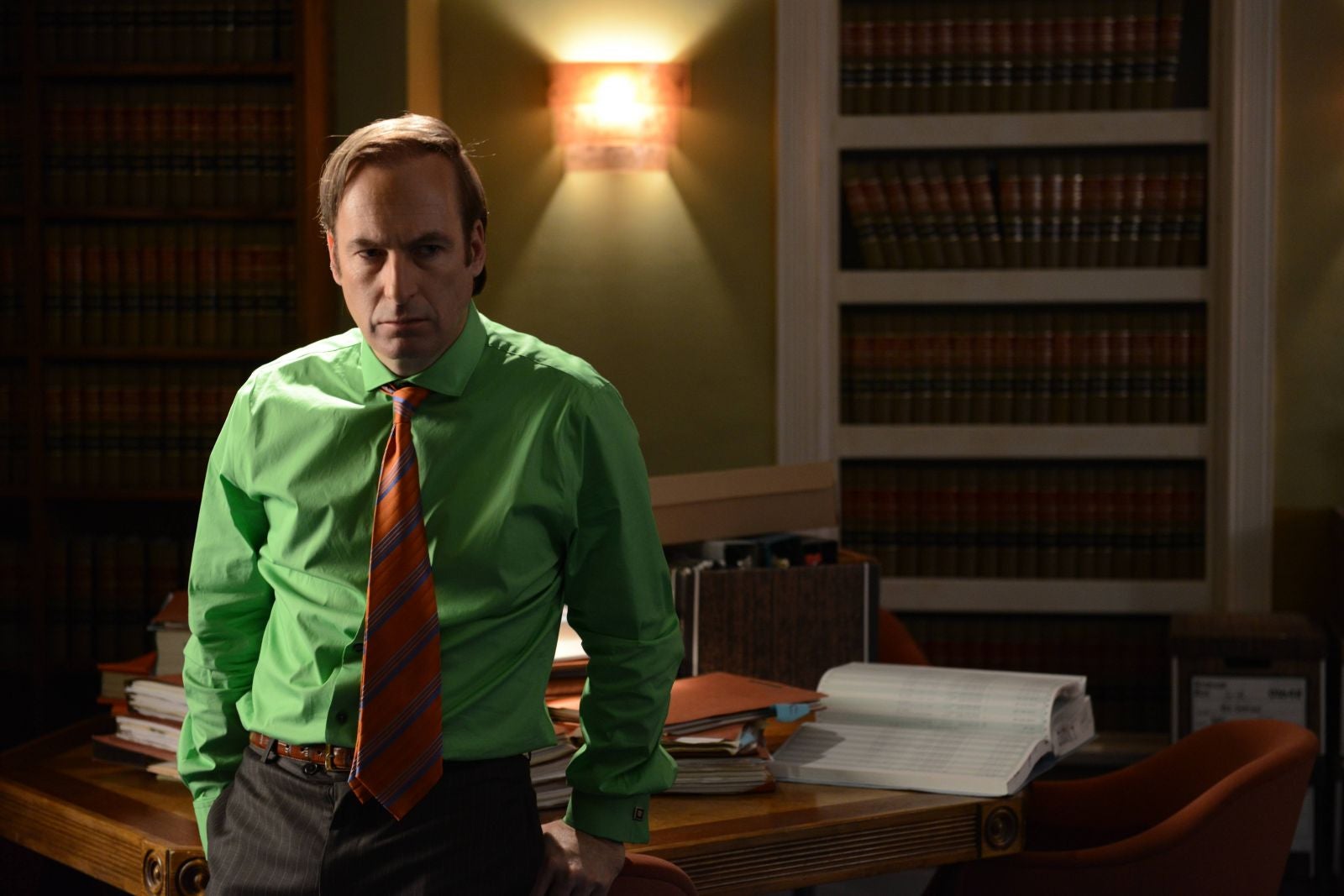 When Walt hears about this, the camera pulls back to reveal that he is having chemotherapy. The cancer is back. Last week Breaking Bad enthusiasts at the Telegraph published their predictions for the second half of the final series of the show. One of the ideas that intrigued me most was Benjamin Secher’s suggestion that “there are only two reasons to give a character the exact same name as his father: one is to suggest that the boy will inevitably following his dad’s footsteps (and if the series had a softer centre, it would end with junior taking the helm of Walter’s crystal meth empire); the other is to set-up a scene of mistaken identity.” Could Walter Jr. (RJ Mitte) suffer for the sins of his father? The old familiar sickness in my guts returned on reading Catherine Gee’s litany of possible deaths:

Half of these ideas seem unlikely, but none are impossible. Ever since the pilot I had been convinced that the cancer would kill Walt, and that his actions would have been in vain – that is what a tragedy requires. But then his crimes escalated beyond anything I had imagined. The point at which Walter watched Jesse’s girlfriend choke to death on her own vomit was probably the point at which I decided a splutter and fall would be too good for Walt. Gilligan has spoken of his desire for judgement, for cosmic realignment, in making the series. The fear now is that Walter has tainted the family he claimed to be acting to save, and that they too must pay the price. 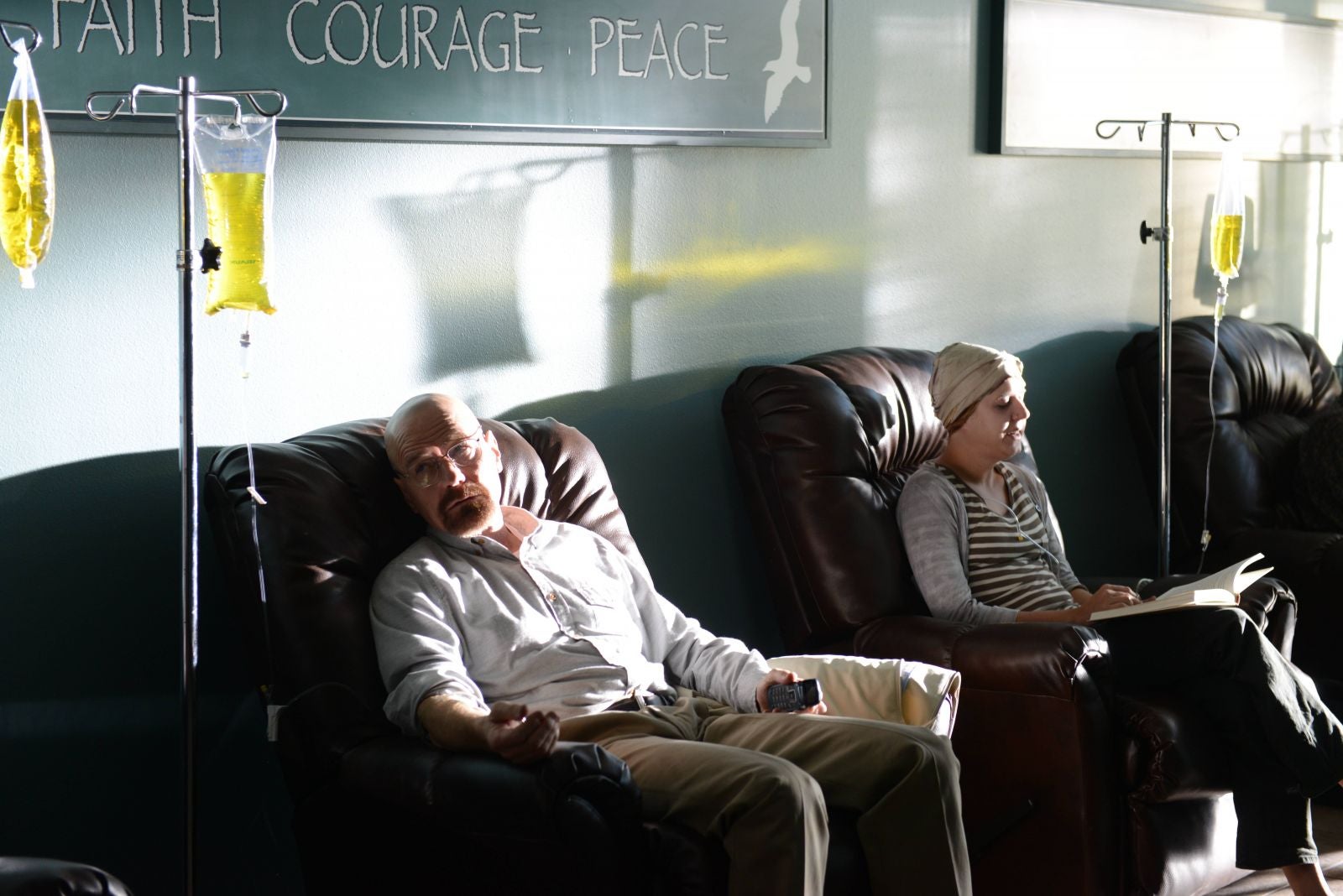 Walt is back in chemotherapy. Photograph: AMC.

In a throwback to episode 8, but also to the first series, Walt throws up in the toilet as a result of his cancer treatment. He notices his Leaves of Grass is gone. Walter has always been an incredible liar – he lies so well he can convince himself of almost anything. To begin with he lies to inflate the demon Heisenberg, to scare off the competition and satisfy his ego. Later he lies to deny it. He tells Jesse that they are both “out” (sound familiar Mr Corleone?) and that they can “try to live ordinary, decent lives”, before lying through his teeth, again and again, about his not having killed Mike.

Still, Jesse goes on a philanthropic spree, throwing large bundles of cash into front gardens, cacti and down drains, trying to atone like a junkie Lady Macbeth. This creeping episode reaches its crescendo when Walter, paranoid about his lost Whitman, finds a tracking device stuck to the bottom of his car. The next day he drives to Hank’s, is alarmed by his suspicious behaviour, and confronts him about it. Hank lowers the garage door and clocks Walter, splitting his temple wide open.

At first Walter seems to concede his guilt, not begging, but negotiating with Hank: “You and I both know I would never see the inside of a jail cell. I am a dying man who runs a car wash. My right hand to God that is all that I am. What’s the point?” But this, as was the case at the end of series 3, is a perfect collision of the two Walters: Mr White and Heisenberg. Even though he has, after 55 episodes, finally been rumbled, it is Hank who looks truly washed out, shocked and afraid. He asks Walter to bring over Skyler and the kids, so they can “talk” – which Walter refuses. They are now his hostages.

“I don’t know who you are,” Hank whispers at the end of the episode. “I don’t even know who I’m talking to.”

Heisenberg responds: “If that’s true, if you don’t know who I am, maybe your best course would be to tread lightly.”

I’ll be blogging after each of the final eight episodes of Breaking Bad. If you want to follow the series, bookmark this page.