When I read the awful responses to Anita Sarkeesian’s tweet about wanting more games with female protagonists, my heart didn’t sink. It barely dipped. I’m used to the kneejerk responses from a vocal minority when you talk about women in games.

At first, I thought about responding to the points raised by the many angry gentlefolk of Twitter, thusly:

Hey, could you force another human being out of your body? Don’t knock it until you’ve tried it, buster.

Yeah, maybe if you actually read the latest ESA report, you’d know that in the US women make up 47 per cent of gamers.

Clearly you do, Patq911, if that is in fact your real name. 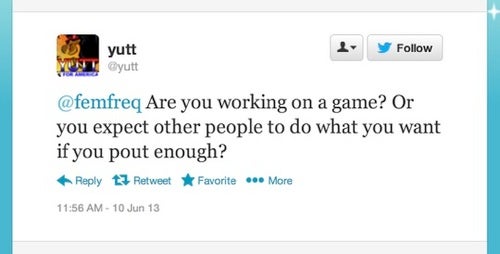 Are you working on a game? You seem to be Mr Opinion, and yet I somehow doubt that you are secretly Jonathan Blow.

. . . and then I got to this one. And I thought, as fun as shooting sexist fish in a Twitter barrel is, it’s probably worth laying this argument out.

Why do games need to have female protagonists? Because women exist. Women have lives. Their experiences of life can be shaped by the things that only happen to women – pregnancy, childbirth – and by the things which happen to women more than men – being the only one of your gender in a room, rape, harassment, objectification, people being a prick to you on the internet, that sort of thing.

We have expectations about how women behave, what being a woman in a given situation means. A great storyteller (male or female) can use that to tell more interesting stories. Tropes are not inherently bad; they are shorthand, which means they can be used lazily, or they can be used creatively, subversively, interestingly.

Let’s take a couple of examples. Anita Sarkeesian has talked about the “damsel in distress” trope, and it’s one that comes up a lot in games because of the format of quests and objectives. You can use that trope in a boring, unthinking way, where some slab-of-meat guy pounds across an identikit wasteland to rescue a one-dimensional princess, or you can do something with it.

Because tropes are shorthand, they rely on a sense of expectation built up by their many previous uses. That’s gold dust for a creator who wants to surprise her audience. Joss Whedon’s original pitch for Buffy The Vampire Slayer was to show people “the little blonde girl who goes into a dark alley and gets killed in every horror movie”; except in his show, the little blonde girl and the monster would go in the dark alley, and only the little blonde girl would come out. (Incidentally, for all dudes who worry that what feminist game critics want is Joyless Dungaree Simulator, Buffy manages to be funny and sexy, as well as feminist.)

Or, to move on to videogames, how about one of the most critically acclaimed indie games of recent years, Braid? That gets its emotional punch entirely from the fact you assume that you’re a gallant questing leprechaun rescuing a lovely lady, when – spoiler alert – it turns out that knight “abducting” her is actually saving her from you.

You don’t even have to subvert totally the trope to make it interesting; you can also approach it knowingly. When I interviewed Ken Levine before the release of BioShock Infinite, I asked him why the “Little Sisters” of the first BioShock were female. Would the dynamic have been the same if you’d had to rescue Little Brothers?

He answered, honestly, that he’d drawn on memories of a girl he had known in real life who had died young. Replaying the game now, I can see the fact that Levine drew on personal experience makes the game richer, more affecting – no wonder I felt the desire to protect the Little Sisters so keenly. If a trope speaks to you on a personal level, and you are confident that you can make it feel fresh again, then of course you should use it.

There is also the bonus that the depiction of Little Sisters gives Dads an adorable way to take their daughters to conventions in cosplay: 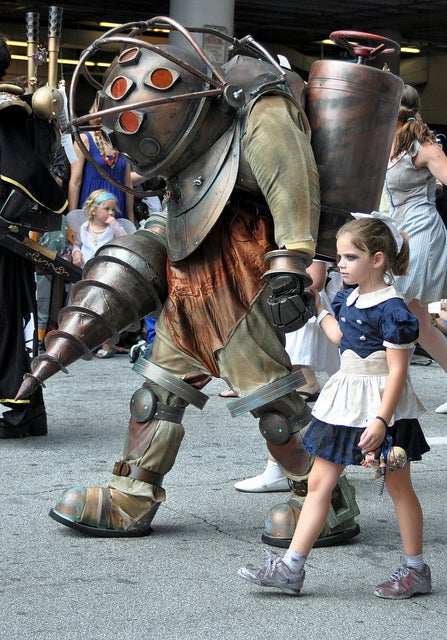 I’d make the same case about Elizabeth in BioShock Infinite: on the surface level, it looks as though she is “the princess in the tower”, the most archetypal form of the damsel in distress. But as the game develops, not only is she bloody useful – where is she finding all that sniper ammo and cash? – but by the end, you realise that far from saving her, she is there to save you from yourself.

In the end, the argument is the same one I was making last week about the need not to “ban” rape jokes, but to ask for better rape jokes. If the only people talking about rape are male comedians relying on the premise that it’s funny simply because it’s a taboo, that gets tired pretty quickly. Similarly, in games, calling for more female protagonists – and more interesting female protagonists – isn’t censorship, it’s expansion. It’s about telling more stories.

The Angry Gamer Army need to know that women aren’t coming to take games away from them. First person military shooters are still incredibly popular, and companies will continue to make them. If you want men with implausible facial hair to shout about being Oscar Mike while men of whatever the current acceptable ethnicity for baddies is throw flashbangs at you, the games industry will still provide.

But look at your record collection. I grew up listening to Radiohead, Oasis, The Beatles, Bon Jovi and more terrible Europop than I care to admit, but I also listened to Billie Holiday, Nina Simone, Elastica and Madonna. The latter group offered more than just a set of songs I could sing along to without feeling slightly self-conscious about the pronouns. Yes, you could read books only by male writers and never be short of a paperback, but why would you deny yourself the unique perspective on the world brought by Jane Austen, JK Rowling or Hilary Mantel?

In Portal and its sequel, GlaDOS could just have easily have been male – but the player would have missed out on the richness of her backstory as Caroline, and her relationship with Cave. We’d also have missed out on Ellen McLain’s incredible performance. In those games, you barely notice that the protagonist, as well as the nemesis, is female – but Chell is a girl, because, you know, some people are girls. Maybe as many as a fifth of people, I hear.

Games are exciting because they are a relatively young medium, and no one knows exactly where they will go next. But can we all agree that the silent tortured beefcake protagonist has been pretty well explored now, and it’s much harder to make a game exciting if it has one? Can we agree too, that more variety generally in protagonists and secondary characters would make games better, not worse – that Daisy Fitzroy’s race and Jester’s disability add more depth to those characters than yet another white, straight able-bodied man?