Film-makers, unlike actors, rarely achieve the mummifying status of national treasure, and those that do (Richard Attenborough, say) are not usually at the vanguard of their art. Two directors who might be in contention for this dubious honour have new work out this month. One is Ken Loach, who is far too prickly to be realistically a national treasure: if the nation were to clutch him to its bosom, it might leave a nasty rash.

The other, Danny Boyle, is a simpler case, though for an unusual reason. It is not his work for cinema that has transcended cultural and generational boundaries but his direction of the London Olympics opening ceremony last year.

This ambitious project was also a crazily eccentric one; scale and spectacle were shot through with dottiness, as though Monty Python’s Ministry of Silly Walks were being choreographed by Busby Berkeley in a staging visible from space. (Come to think of it, that must be one of the few batty ideas that didn’t make the grade.) The production won Boyle a degree of admiration that cannot be measured in best director Oscars or credibility (though he has both). It was, to this viewer at least, the finest Danny Boyle film never made.

Now, it’s back to the grindstone. Boyle’s new thriller, Trance, was shot months before the games and then edited just as the Olympic Park was being disassembled and the roof-mounted missiles returned to the cupboard under the stairs.

The film has London at its heart but here the city is a superficially sleek, flashy model of western sophistication beneath which lies a reservoir of violence and hurt. It is, in that sense, not unlike the film’s characters: Franck (Vincent Cassel), a gangster who masterminds a heist to swipe a priceless Goya; Simon (James McAvoy), the auctioneer and inside man who colludes with him, only to lose the spoils shortly before suffering a head injury; and Elizabeth (Rosario Dawson), a hypnotherapist to whom Simon turns to retrieve his memory of the painting’s whereabouts.

Each of them has secrets that are revealed as the convoluted plot unspools. If we have been totting up the clues correctly, everything will look markedly different at the end of the film, when our assumptions about Franck, Simon and Elizabeth have been thrown into disarray. In a worst-case scenario, it may take longer than usual upon leaving the cinema for you to remember where you parked your car.

If I have been circumspect about giving too much away, it’s partly because I was handed a letter from “Danny” at the screening, requesting that I would not reveal any of the plot’s surprises.

Whether I was the only one to receive such an instruction, and that he had simply heard what an incorrigible blabbermouth I can be – OK, so I once described Citizen Kane as “the sledge movie” – I cannot say. The problem with Trance, though, is particularly acute, since there is nothing to it apart from its mysteries. That’s not true of its influences, which have a thriving life beyond their “spoilers” – Nicolas Roeg’s Don’t Look Now, David Cronenberg’s eXistenZ, Christopher Nolan’s Memento. Or, for that matter, the sledge movie.

The film is at its strongest visually. Anthony Dod Mantle’s cinematography and Mark Tildesley’s production design reinvent London as a half-deserted playground of brick, steel and neon, finding in its clustered streets and rooftops an unnerving desolation. (A walk in the park for these collaborators, perhaps, after the startling scenes of a depopulated capital in 28 Days Later . . .) And while there are references to Goya being “the first great painter of the human mind”, Boyle makes a good case for himself as a director skilled at conveying mental states.

Trance is as mischievous as a dream and just as ephemerally entertaining in a moment- by-moment sense. The eye is always being tickled, the funny bone nudged. Vincent Cassel is shown wielding a fire extinguisher, which is enough to induce nausea in anyone who recalls the head-bashing scene in the actor’s earlier film Irréversible; while a bottle of tomato sauce stands prominently in the foreground during a gruesome episode in which a man continues to natter after his face has been demolished by a shotgun blast. It’s as if Boyle is reminding us that the gore is only ketchup, and what we’re watching is just a movie.

Ultimately, that’s all Trance is. It has to be a problem that such a hefty chunk of the action takes place inside Simon’s head during hypnosis – in other words, not really happening at all. Then again, there is a tradition of romps confined largely to the brain, Inception being only the most successful. In the end, it’s the unnecessary tricksiness of the film that halts its flow. A crucial human component is missing. The film may be dreamlike but that’s just another way of saying it doesn’t add up to much once the lights come on. 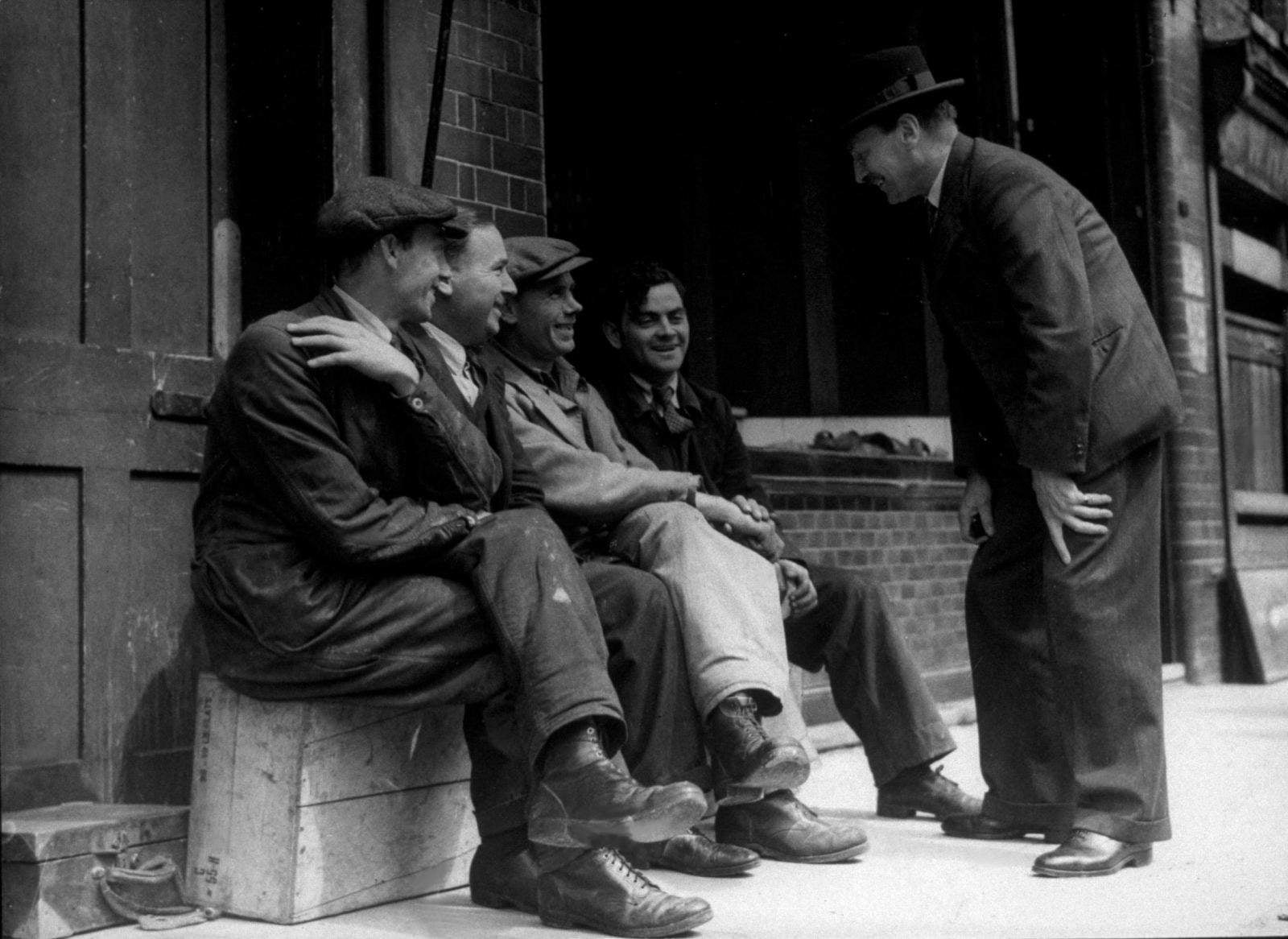 Clement Attlee talks to workers in his Limehouse constituency in 1945. Photograph: Getty Images

Along with Roeg, Loach was another influential director whose work featured in a montage during Boyle’s opening ceremony. He is back now with a documentary, The Spirit of ’45, a rallying cry to Britain today from those who remember the battles fought to rebuild the country in the years immediately after the war. Aside from its final moments, the film has been made entirely in black-and-white, the better to provide a continuity of experience with the archive material, rather than a then-and-now approach. The entire point is that those battles for equality need fighting again now. Principles central to British welfare and identity require defending all over again.

Loach scatters talking heads (a GP, a train driver, Tony Benn) among the footage brought together by the great archivist Jim Anderson. The assemblage by Loach and his editor, Jonathan Morris, ranges between the dust-dry and the fiercely sentimental. Loach’s 1983 documentary, The Red and the Blue, about the Labour and Conservative conferences, showed how acidic he can be but the mood of The Spirit of ’45 is mostly of the tub-thumping variety. The editing bursts brilliantly at the seams on just one occasion.

Reflecting on the hiding he received at the hands of a policeman, a former miner wonders rhetorically, “Who is it who gives them the power to beat me, a working man, with a stick?” The cut to Margaret Thatcher at a Conservative conference, waving a yoohooing hand as if accepting responsibility shamelessly, is an unbeatable instance of the editor’s scissors being used to snipe as well as to snip.

The film provides a chronology of hope, from the pre-war years when doctors doubled as debt collectors, to the formation of the NHS and the nationalisation of transport and mining.

A sudden leap forward to Thatcher leaves a 1970s-sized black hole but it all ends in a burst of righteous anger and an invitation for us to continue the fight. Still, I have a low tolerance for cartoon touches such as the use of fox-hunting footage to represent the upper class, while the poor are all cloth caps, stout and gappy smiles. Loach is better than that; he’s no Michael Moore.

That The Spirit of ’45 survives its simplifications is due to the sincerity and urgency of Loach’s argument. And, regrettably, to its pertinence.