Last week I was disconnected in the middle of my discourse. I had just reached Mr. James Joyce and Ulysses. The hubble-bubble of talk round it has subsided, but its influence is likely to be far-reaching. Although copies are destined to find their way into the libraries of those who collect books described in catalogues as “very curious,” it is far from being pornographic in intention. It is perhaps the most obscene book ever written, but it is not a lascivious on; it is, almost dismally indeed, the opposite of that.

The author has been compared to Rabelais. He has only in common with Rabelais a gust for and an exuberant command of words; a like avidity for verbal analogies and assonances, which he carries to a point characteristic of a peculiar mental aberration which used to be called puns, alliterations, or repetitions, which here and there flash into wit, or form an amusing or brilliant collocation of vocables, but more often make an echoing rumble which is not addressed to the intelligence; he flings about a lot of dirty words as well as crashing learned ones. And here all resemblance stops between the author of the inestimable life of the Great Gargantua and that of Ulysses, though one must add they are both born parodyists, the former of general ideas, the latter of literary methods. Indeed, in spirit, two books could not be wider apart.

At bottom, though the most extravagantly fantastical of men, Rabelais was as sensible as it is possible for an alarmingly solid human being to be, and of a downright direct simplicity which makes even Montaigne seem a coquettish, cat-and-mouse writer beside him. If you examine what lies behind Rabelais’ art as a great story-teller (he excelled there) and as a care-destroying buffoon, what is revealed is the philosophy of common sense, a gay stoicism. In the case of Ulysses there is a gloomy background to those exuberant verbal torrents, a morose delectation in dirt; I touch no intellect below, only a mass of nerves and a haunted imagination.

Aussi eût-il été bien forissu (sorti) du déifique manoir de raison si autrement se fût constristé au alteré. Car tous les biens que le ciel couvre et que la terre contient en toutes ses dimensions, hauteur, profondité, longitude et latitude, ne sont dignes d’émouvoir nos affections et troubler nos sens et spirit; that is the essence of Pantagruelism. Above all, Rabelais is fearless; he has no more fear of the body, its functions and secretions, than a doctor. The exhilaration which he imparts is largely due to the laughing indifference with which he handles what others shrink to touch. Amusement at, not horror of, the body is the infection which the reader catches from his pages. He tells us he wrote his book to cure with laughter sick people; sick or not physically, the imaginations of many are sick and queasy, and perhaps the sickliest and most queasy imagination which has found expression in literature is that of Mr. James Joyce himself. The Portrait of a Young Man as Artist, one of the few really remarkable and best written of recent novels, throws light upon Ulysses. It enables the reader to measure the depth to which a superstitious horror of the body and sex has been branded into his mind, and explains why passages which appear pointlessly nauseous or exaggeratedly horrible in Ulysses came to be written: to us they may seem messes, to the author they represent, no doubt, the most difficult spiritual victories over private inhibitions. One thing that spoils Ulysses as a work of art is that it is far too much a self-administered cathartic. The author may have freed himself, but he brings no freedom to anyone not in his predicament. There is wit in it, just as there is an amazing acid precision in nailing down with a phrase – especially whatever disgusts – but of laughter there is only an approximation – a croak or a derisive snigger. The quality of its humour may be measured by the fact that in making, according to preposterous plan, each of Bloom’s adventures during twenty-four hours correspond, by some far-fetched analogy, to the consecutive subjects trated in the books of the Odyssey, Bloom, when the Æolus episode occurs in Homer, is represented onomatopoeically as troubled by wind while looking at a picture of the dying Wolfe Tone in a shop window. Silly? Yes, very.

I do not say that at the base of every good book of this kind must lie a robust and fearless philosophy. Out of hag-ridden horror, and cold hostile curiosity the adventures of the body can also be written, but let us once and for all drop any comparison of Mr. James Joyce to Rabelais.

Modern fiction, in so far as it is adventurous, tends to become more and more rhapsodical, episodic, and psychological. The importance of Ulysses lies in its carrying these tendencies to the very last limit. It is instructive to see what happens. Of course “the story” disappears (the story has already disappeared from the work of many contemporaries), but, in a very real and significant sense, “characters” have disappeared also. During the latter part of the nineteenth century, and during this one there has been a continually increasing tendency to go deeper in what is called the “psychology” of characters in fiction, to get behind the motives of which the characters are conscious and to which they would confess if they asked why they did such and such a thing. Ever since Tolstoi made Anna Karenina think of bathing when she threw herself under the train, the tendency to find irrelevant thoughts and feelings important has increased. Human beings, no doubt, do their thinking and feeling in the interstices of long wool-gathering processes, and at moments even of intense emotion the mind may fly about in the most erratic fashion. The older novelists ignored this fact completely; they did not attend to such phenomena, because they did not conceive them to be part of rational human life, the only thing worth writing about. Nevertheless it was discovered that some suggestion of this fact helped enormously to give vivid actuality to emotions described in fiction. Those who wrote later went farther; and latterly we have had novels written by authors who are fascinated by this irrelevant helter-skelter of thoughts, half-thoughts and sensations. Now the fact that Anna was inconvenienced by her little red bag when committing suicide, and that Vronsky’s spiritual misery was swamped by the toothache, adds nothing to our grasp of either as “characters”; Kitty and Levine might have had the same thoughts and sensations in the same circumstances; we have got to know Anna and Vronsky thanks to touches of a different kind. What these incidents illustrate is not “character,” but the nature of the human machine itself common to all humanity, however much individuals differ. The greater space therefore the novelist devotes to such facts, and the more he relies upon them exclusively, the more he tends to destroy his figures as “characters.” His novel, especially if he follows a system of interpretation like Psycho-Analysis, tends to become a pseudo-scientific discourse about imaginary cases; utterly worthless, of course, to men of science, or to anyone in the least scientifically minded, and utterly uninteresting to all except to those young readers to whom such partial revelations of possible truths about human nature come as a startling surprise.

Mr. Joyce has carried this process farther than anyone else. In retailing the thoughts, half-thoughts, perceptions of inattentions of Bloom and Mrs. Bloom, he has sunk a shaft down into the welter of nonsense which lies at the bottom of the mind, pumped up this stuff and presented it as a criticism of Life. 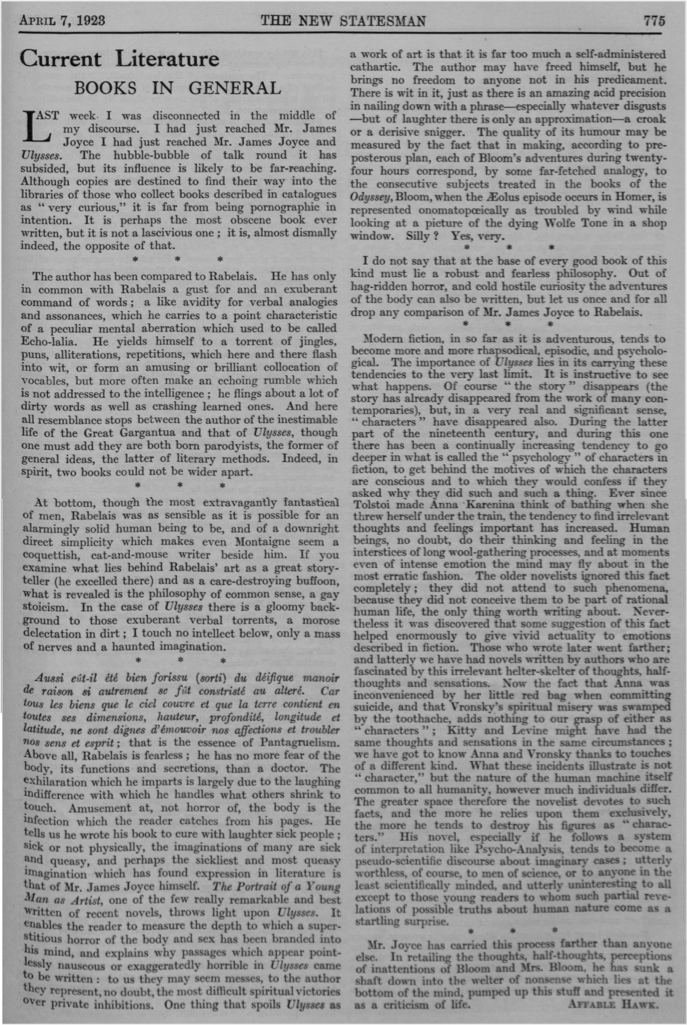