Twilight, the vampire-werewolf-phenomenon, has always had some questionable elements. The entire plot of the first film, for instance, is basically “I love you but we can’t sleep together because I’m a Christian and we’re not married you’re a vampire and your super vampire strength means you may accidentally kill me in the passion of the moment”.

A few films in and the main character, Bella, and her vampire boyfriend Edward have got married and done the dirty. Unfortunately, Bella insisted on having sex once as a human before Edward completed the vampire wedding ritual, which of course means that she gets super-pregnant with a vampire baby which eats its way out of her womb after coming to full term after just a week or so.

We aren’t even on the weird stuff yet.

All caught up? Enter Jacob. Jacob is a werewolf who’s also totally in to Bella, creating a tense love-triangle dynamic (or so I’ve been told). What you have to know about werewolves is that they “imprint” on people: when one of them sees their soul-mate, they know immediately that they are destined to be together. So naturally, Jacob imprints on Edward and Bella’s baby daughter, Renesmee.

Now, they refer to it as imprinting throughout the series, but whenever you see any other “imprinted” werewolf, it’s all couples who are snuggling together and kissing a lot. And, at least in the film, Jacob’s imprinting is followed by a flash-forward where he talks about how he’d do anything for Renesmee because he’s so in love. With a baby.

Today, the set photos from Twilight: Breaking Dawn Part Two came out. Now that you are fully caught up, I hope you will agree that the following photo, of Taylor Lautner as Jacob and 11-year-old Mackenzie Foy as his love interest Renesmee, is the creepiest thing ever. 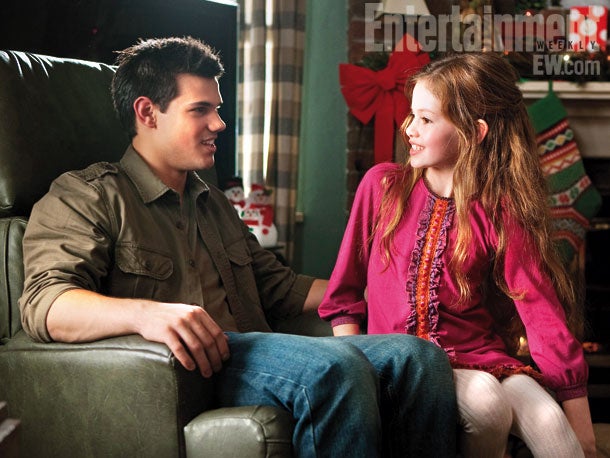