Russia’s invasion of Ukraine last week came as a shock, despite Vladimir Putin’s build-up of forces on the country’s border. It was not only many Russians who were living in denial. The Ukrainian president, Volodymyr Zelensky, had been sceptical that an invasion was coming. According to the journalist Tim Judah, very few people in Ukraine expected a full-scale invasion. This is surely because Putin’s decision looks deranged, even by the standard of his own realpolitik.

Putin had appeared to be a skilled opportunist. He did not start the war with Georgia over South Ossetia in 2008 but he took advantage of an easy win to “recognise” the independence of South Ossetia and Abkhazia. He took advantage of the civil war in Syria to build up Russian power in the Middle East by supporting the Assad dictatorship. He didn’t cause Ukraine’s civil war after the Maidan protests in 2014 but he exploited Kyiv’s deep unpopularity in Donetsk and Luhansk to support pro-Russian separatists with unmarked Russian troops. The Minsk ceasefire agreements signed by the Ukrainian government in 2015 largely reflected the imbalance of forces created by Russian intervention.

Even on Putin’s cynical terms, though, this invasion looks like a wild miscalculation. Moscow clearly sees Ukraine sliding out of Russia’s orbit and its fear of Nato encirclement is not baseless. As the Russian dissident Greg Yudin has pointed out, the alliance has doubled in size since Putin became president in 1999. Any Russian government would try to slow that down. But attacking Ukraine has caused a critical backlash against Putin, internationally and domestically. Protesters crowded the streets of Warsaw, Tbilisi and — despite threats of repression — St Petersburg. More than a hundred municipal delegates from various Russian cities issued a statement condemning Putin’s war. Putin has made Nato more appealing to traditionally independent states such as Finland. A series of economic sanctions has led the rouble to plummet to a record low. In Ukraine Putin’s interventions had already increased support for the Western military alliance. Pulverising Ukraine now will only reinforce that. Russia has never been more isolated.

Why, then, has Putin embarked on this seemingly unhinged attack? Joe Biden, the US president, has argued incorrectly that Putin wants to “re-establish the former Soviet Union”. This has become a commonplace in foreign policy commentary. Putin encourages this idea by repeatedly claiming that the collapse of the USSR was a “tragedy”. But, in what he has said and written about Ukraine, he sees himself as undoing a legacy of the USSR: specifically, the achievement of nationhood following the 1917-1921 Ukrainian independence struggle. In a vicious irony, noting the anti-communism of today’s Ukrainian nationalists, he describes the crushing of Ukrainian sovereignty as “decommunisation”. 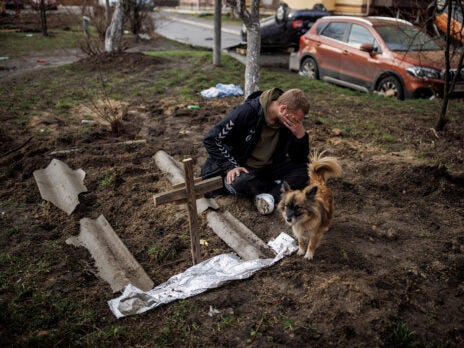 Biden’s line is also self-serving. Putin, far from being a Soviet throwback, represents the system that the West embraced. What transformed Putin from a colourless bureaucrat to a president with 80 per cent approval ratings lauded on the world stage by Bill Clinton, Tony Blair and then George Bush, was his ferocious assault on Chechnya in April 1999. In the pages of Time Clinton welcomed Putin’s effort to “liberate Grozny”. Nor has Putin returned to a statist command economy. As his former adviser Gleb Pavlovsky explained in 2012, the Russian president’s view is that Russia lost the Cold War “because we didn’t do several simple things: we didn’t create our own class of capitalists, we didn’t give the capitalist predators on our side a chance to develop and devour the capitalist predators on theirs.” And as Tony Wood points out in Russia Without Putin (2018), Putin furthered Boris Yeltsin’s pro-oligarch policies, including the stripping of labour rights and tax cuts for businesses: all lauded by American neoliberals at the time.

Putin’s system of “managed democracy” is also consistent with Yeltsin’s bequest. He has worked within the constitutional order created by Yeltsin, who shelled the Congress of People’s Deputies in October 1993. Under this system the powers of the presidency were expanded and the legislature shrivelled. Putin’s fondness for election-rigging even echoes Yeltsin’s achievement in the 1996 presidential election. This is a constitutional system designed to protect the property rights of the oligarchy and to actively depoliticise the Russian people who, in the words of Pavlovsky, Putin fears are “ready at any moment to pounce on the authorities and tear them into bloody pieces”. The regime has become more repressive and nationalistic, particularly since the 2011-13 wave of protests against the government, but fundamentally it is the system that the West endorsed.

This invasion of Ukraine represents an attempt to conserve that system. As Yudin argues, Putin doesn’t understand geopolitical struggles separately from domestic challenges. “The approach of Nato and the growing discontent in Russia are perceived by Putin not as two different problems, but as a single, combined one.” There is an established pattern here. During the protests between 2011 and 2013 Putin wasted no time in deriding his opponents as American stooges. The trial of the punk band Pussy Riot in 2012 was framed as part of a culture war and the struggle of a “Eurasian” civilisation committed to Orthodox values against a decadent West. The same hard line against “colour revolution scenarios” — in the tradition of, for example, the Rose Revolution in Georgia in 2003 or the Orange Revolution in Ukraine in 2004 — has been deployed during unrest in several post-Soviet states. Today the protest movement of which the opportunist Alexei Navalny aims to be the leader is accused of fomenting a “colour revolution”.

In Ukraine, after the Maidan Square protests, Putin declared that it was essential to prevent such “colour revolutions” from reaching Russia. In reality, as the Ukrainian sociologist Volodymyr Ishchenko argues, while the post-uprising government was partly midwifed by Washington, the civil war in Ukraine was caused neither by Moscow nor Washington. It is evidence of the failure of the new Kyiv elite’s liberal-nationalist project, which never appealed to more than half the population and split the oligarchs. Putin’s intervention in that civil war has exploited real problems with Ukrainian nationalism.

For example, the Kyiv authorities, far from being plucky democrats, have been banning books, banning journalists, curtailing journalistic freedom, locking up protesters on the grounds that they are Moscow stooges, using secret services to allegedly intimidate the mayor of Kyiv, a rival of the current president, and shutting down pro-Russian opposition media.

Since the Maidan protests the anti-Russian thrust of Kyiv’s nationalism has incubated an influential far-right contingent. This included the Svoboda party, whose leader is said to have claimed that Kyiv is governed by “a Jewish-Russian mafia”. Further to the right, the Right Sector’s founder, Dmytro Yarosh, was appointed an adviser to the Ukrainian armed forces in June 2014. Right Sector paramilitaries were deployed, along with Nazis recruited by the Ukrainian interior ministry, as “volunteer” units in the counter-insurgency operation in Donetsk and Luhansk. Kyiv has in recent years disseminated a revisionist national history honouring and building monuments to Nazis. Hence Putin grotesquely claims to be denazifying Ukraine, all the more obnoxious a lie given Russia’s support for far-right forces in Donetsk and Luhansk.

Official paranoia in Russia takes real, harsh truths, and construes them as evidence that Russia is surrounded by enemies linked by a common cause against which it has a short window to act. That paranoia, aimed as much against Putin’s internal critics as abroad, has turned violently destructive.

This may well be the worst mistake Putin has made. And it is unleashing paranoia well beyond Russia’s borders. Anti-Russian malice in the UK reached a delirious new zenith when the Labour MP Chris Bryant argued that UK/Russian dual nationals should be forced to choose nationalities (he later deleted the tweet), while the Conservative MP Tom Tugendhat suggested expelling all Russian citizens from the UK (though he later said that he had meant all those connected to Putin’s regime).

The political establishment is out to stigmatise dissenting views. There is near unanimity against the invasion, but leading politicians want no criticism of Nato or Western powers. Owen Jones, a vocal critic of Putin, has been called an “appeaser” by a Tory MP. Keir Starmer, the Labour leader, having attacked the campaign group Stop the War in the Guardian, threatened to withdraw the whip from 11 Labour MPs who signed a Stop the War statement condemning Putin’s actions but also criticising Nato expansion. Labour management took over Young Labour’s Twitter account, slashed its funding and cancelled its conference as punishment for its criticisms of Nato.

The anti-war left should not be cowed. It is right to keep its independence from Putin and Nato — and the cynics who want to shut down debate are mired in decades of failed policies and have no real answers.

Richard Seymour is a writer, broadcaster and activist. His latest book is The Twittering Machine.