Somewhere in Brussels, hopefully on a secure server, sits a draft Word document entitled “Nato Strategic Concept 2022”. It’s been years in preparation and was set to be signed off by politicians from 30 countries at a summit in Madrid, come the end of June. Over the past 14 days it is likely that a second document has been created, entitled “Version 2”.

Russia’s attack on Ukraine has upset the calculations of international relations experts, diplomats and defence ministries across the Western world. Nobody got it right, because from the realists to the idealists, no expert could discern the logic of invading Ukraine without the means to occupy it. They read Vladimir Putin’s rambling ahistorical treatise on Russian-ness as a hodgepodge of borrowed ideas, written to disguise some hard-headed negotiating move.

Now we’re learning to take Putin at his word. When he says the Ukrainian people are inseparable from the Russian identity, he means it. When he issues a draft treaty ordering the reversal of European history back to 1997, that’s what he’s trying to do. When he co-signs a declaration with Xi Jinping, repudiating the universal rights ordained by the 1948 declaration, he’s not making a suggestion: he’s issuing an order.

As they scramble to maintain unity, Nato’s planners know their entire strategic framework will have to change, and with it the force structures and technologies they use to deter Russia from aggression beyond Ukraine. As they do so, we — the peoples of the 30 signatory states — need to elbow our way into the conversation.

Dispossession and defiance: how Hong Kong’s struggle explains our world 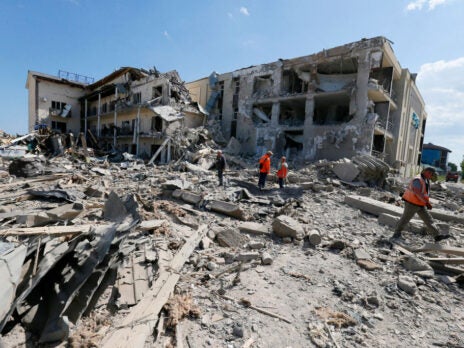 Nato’s primary task, from now until the end of the carbon era, will be either to deter further aggression from a militarised, oligarchic and autarchic Russia, or to contain and manage the vast socio-political crisis that would be triggered by its collapse. There is no return to a “normal” scenario; no third option. Most politicians I’ve spoken to since the invasion of Ukraine on 24 February, even those with a basic theoretical grasp of war and international relations, are still in a state of cognitive dissonance. To snap out of it we must confront, collectively, some basic questions.

Are we prepared to risk a nuclear war that would annihilate civilisation, at the very least in parts of Europe, North America and western Russia? I hope the answer is no. Is Nato prepared to fight, conventionally, for Ukraine’s sovereignty? While the answer right now is no, what will the answer be if Putin begins starving people to death and executing resisters in the streets? If the answer is — as I suspect — still no, then what forces do we need to deter Putin from attacking the weakest and most vulnerable states among the Nato members and close partners, once the Ukraine war is fought to a standstill?

[See also: MPs applauded Zelensky – but they have resolved Ukraine must fight alone]

Let’s understand the dangers. In 2018 Donald Trump publicly threatened to take the US out of Nato; to leave Europe to its dreams of “strategic autonomy” without a pledge of collective self-defence. So long as Trumpism remains a mass, active force and in control of the Republican Party, the threat of breakup will recur.

Our own country had already done its bit to disorganise the West by leaving the EU and refocusing its trade, foreign and security policies towards the “Indo-Pacific”. Meanwhile Turkey’s Recep Tayyip Erdogan fuelled disintegration by accepting long-range anti-aircraft missiles from Russia and laying claim to territory belonging to its supposed Nato “partner”, Greece.

Long before Putin’s tanks rolled across Ukraine’s border, Nato had advertised the possibility of its own destruction. Indeed, the disorganisation of the West — via disrupting both Nato and the EU — is Putin’s rational strategic goal.

Nato’s sharp turn to unity on 26 February, with undreamed-of sanctions and military aid, is a defeat much more significant than any of the military setbacks Russia’s armies suffered en route to Kyiv. But Nato’s next strategic concept should be clear.

For starters, it cannot any longer be a “concept” — that is, a diplomatic document full of euphemisms and aspirations, written to disguise differences and avoid specific geopolitical objectives. What Nato needs is a strategic policy — just as Putin has a policy in the Clausewitzian sense, of which this war is “a continuation by other means”.

Its foundations should be threefold. First, we are going to need a large, conventional armed force, across the domains of land, air, sea, space and cyberspace, designed to deter a conventional attack on Nato or its partner countries, which will very likely soon include Sweden and Finland, and possibly Moldova. Nato will also rapidly need to outpace Russia in the technological arms race, achieving superiority over Russia in stealth, sensors, weapons, robotics and electronic warfare and then widening the gap.

Paying for this won’t be easy. As JM Keynes pointed out in 1940, your options are forcing the middle class to lend to the government, budget deficits, price controls, reduced consumption and a state-directed economy. So this will trigger a struggle over redistribution, even though there will be an immediate social upside to a state-directed boost to defence manufacturing.

Second, we need — in every country and across Europe — an overt counter-hybrid warfare strategy, and a ministry or directorate in charge of it. Our democracies are being hit with wave after wave of disinformation, bribery, corruption, electoral manipulation — backed up with classic espionage and threats. You cannot leave fighting this to media regulators, financial watchdogs and localised police forces. And you have to do it under democratic control.

Thirdly, we need active work on the resilience of our democracies. Putin’s ultimate goal is to persuade the populations of the Western world that resisting the illegal attack on Ukraine is not worth it. That the price of petrol is more important than democracy. That, sadly, is a task made easier by 30 years of neoliberalism, which has deepened insecurity and inequality, and eroded trust. The most resilient democracies will be the ones that promote social justice, equality, tolerance and economic security.

Massive conventional deterrence, technological supremacy, active counter-hybrid capabilities and democratic resilience are the objectives that need to be at the heart of any new Nato strategic document — with the people, not the securocrats, driving the debate around it.