Keir Starmer has finally made it. Today, on 11 February, he received the accolade of a praiseworthy editorial in the Wall Street Journal, perhaps the most consistently right-wing of Rupert Murdoch’s mouthpieces.

The reason, of course, was the Labour leader’s panegyric to Nato, his full-throated support for the most confrontational approach to resolving the Ukraine-Russia crisis, and his associated attack on the Stop the War Coalition.

Stop the War is, he wrote in the Guardian, “not benign voices for peace. At best they are naive; at worst they actively give succour to authoritarian leaders who directly threaten democracies. There is nothing progressive in showing solidarity with the aggressor when our allies need our solidarity and – crucially – our practical assistance, now more than ever. The kneejerk reflex, ‘Britain, Canada, the United States, France – wrong; their enemies – right’, is unthinking conservatism at its worst.”

This is a falsification of Stop the War’s position – we are against anyone starting any military action over Ukraine and support the efforts of the French government to find a diplomatic resolution. But Starmer is unbothered by his distortion: attacking the anti-war movement has likely been on his “respectable Labour leader” to-do list from the moment he was elected in 2020.

Keir Starmer needs to deliver the speech of a lifetime 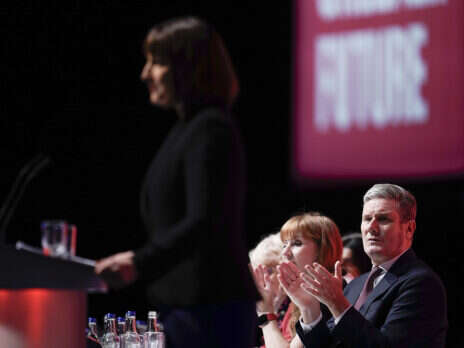 The purpose of Starmer’s intervention was clear from what his article omitted. There was no assessment of Nato’s record over the last generation of wars in Yugoslavia (1999), Afghanistan (2001-21) and Libya (2011). There is no mention of Iraq, invaded by the leading Nato powers in 2003. Civilian deaths from these wars run into the hundreds of thousands, and refugees into the millions. The Nato past began and ended with Ernest Bevin in 1949.

Nor was Starmer any more illuminating on the present. What does the Labour leader think of the Minsk-2 agreements as a basis for a solution to the crisis, which includes autonomy for the Donbas region and an end to foreign military interference? We are none the wiser. Such was not the point of the anti-left posturing.

More relevant for the Labour leader is how the stand-off in eastern Europe provides another opportunity to wrap himself in the British flag and further distance himself from his predecessor. Jeremy Corbyn is a deputy president and past chair of Stop the War.

Starmer’s priorities sit at odds with what an opposition should be doing in a crisis. He launched his attack on Stop the War the same day that the Foreign Secretary, Liz Truss, was in Moscow, failing to build on the diplomatic opening Emmanuel Macron had tried to secure with Putin earlier in the week.

It is alleged that Truss, amid her sloganeering, even denied Russian sovereignty over Rostov and Voronezh, two cities deep in the interior of the Russian Federation, in her talks with Russia’s foreign minister, Sergei Lavrov. This would not be surprising – her role is to make Boris Johnson’s tenure at the Foreign Office look good.

The British government’s position on Ukraine has been one of extreme belligerence, at odds with the approach taken by the Social Democrat-led government in Germany, as well as Macron. It has issued scarifying bulletins that almost seem to will an eruption of conflict. Even the Ukrainian government seems to have found it a bit much.

Yet the opportunity for scrutiny of the Johnson government’s shambolic foreign policy by Labour has been missed. Where a critique is needed, we hear only an echo. “Labour is standing by the UK government’s approach,” Starmer tells us. Unthinkingly following the Conservatives is a better example of “unthinking conservatism” than anything Stop the War has said.

No wonder the Wall Street Journal editorial held the Labour leader up as a model to not just the European left but also the American right, in which there is some aversion to being drawn into fresh conflicts.

Starmer has, however, done Stop the War a favour. He draws attention to the fact that on all the major conflicts of this century – the 20-year disaster in Afghanistan, the invasion of Iraq in 2003, the intervention in Libya in 2011 – the Labour leader has proved to be wrong, along with most of his MPs, while the Stop the War Coalition has been vindicated.

Starmer risks repeating that dismal history. In prioritising sabre-rattling for domestic purposes over a serious assessment of the problems of European security and the roots of the Ukraine-Russia dispute, he raises concerns as to whether any Labour government he may lead will avoid the deathly calamities of the Blairite past.

Andrew Murray is deputy president of the Stop the War Coalition. His book, “Is Socialism Possible in Britain – reflections on the Corbyn years”, will be published by Verso later this year.

Newsletters from the New Statesman View all newsletters
Subscribe for the best of our politics, international affairs, culture and business coverage, straight to your inbox
THANK YOU
Topics in this article: Keir Starmer, Stop the War, Tony Blair