For decades, the Conservatives have been synonymous with tax cuts. Margaret Thatcher reduced the top rate of income tax from 83 per cent to 60 per cent in 1980 and then, in a coup de théâtre, to 40 per cent in 1989. More recently, George Osborne abolished the 50p tax rate on earnings over £150,000 and since 2010 the Tories have cut corporation tax from 28 per cent to just 19 per cent. 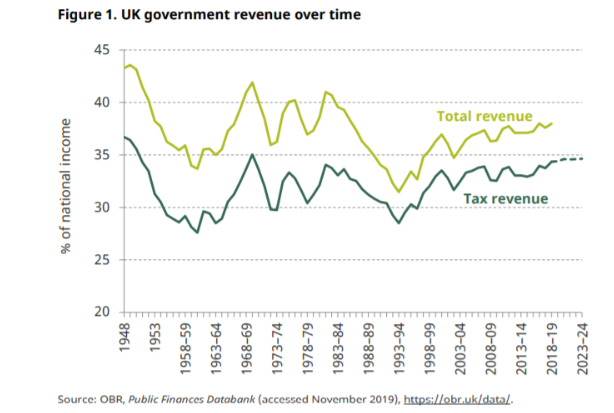 Though individual taxes have been cut, with the personal allowance increased from £6,475 in 2009-10 to £12,500, they have been offset by tax rises elsewhere such as the increase in VAT from 17.5 per cent to 20 per cent and a rise in National Insurance Contributions.

And though the Conservatives scrapped the 50p rate, they have retained the 45p rate on earnings over £150,000, fearing the political consequences of gifting another tax cut to the top 1 per cent. They have also maintained a stealth tax introduced under the last Labour government through which the personal allowance is tapered away above £100,000 and cut income tax relief for pension contributions. The days when the Conservatives flirted with the idea of introducing a flat rate of income tax (with rich and poor paying the same share) have long been forgotten.

The quiet rise in the tax take represents an ideological victory for the left. Rather than prioritising tax cuts, the Conservatives are now pledging to increase public spending and investment, funded through higher borrowing. Boris Johnson is now expected to abandon his leadership campaign pledge to raise the 40p tax threshold from £50,000 to £80,000 (a move that would primarily benefit the top 14 per cent of earners).

The Tories’ policy choices reflect the popular will. The 2018 British Social Attitudes survey found that 60 per cent of the public favour higher taxes and spending (the highest level in 15 years), 33 per cent support present levels and a mere 4 per cent wish to further roll back the state.

Free marketeers have long contended that the tax take cannot exceed 35 per cent without significant economic or political damage. But the UK’s current tax level remains below that of most western European countries and the G7 average.

Faced with an ageing population, and the need to restore the public realm after an age of austerity, the likelihood remains that taxes or borrowing – or both – will continue to rise.