This sounds significant, but is a substantially less generous policy than the one mooted earlier in the week, of an £11,000 personal allowance this year, not in 2017/18. Because tax bands are up-rated by inflation anyway, delaying the £11,000 by two years substantially reduces the benefit to taxpayers. In the absence of any policy intervention, the personal tax allowance would be expected to rise to around £10,760 in 2017-18. This means the announced measure is a rise of just £240, and a benefit of £48 in reduced tax for basic rate taxpayers, rather than the £80 they would receive had it been implemented this year. The rise in the higher rate threshold is £400 higher than where it would fall if increased in line with inflation.

One suspects the chancellor turned away from the idea of an £11,000 personal allowance sooner because the OBR have substantially revised down their expectations of inflation. This increases the cost of an £11,000 personal allowance, since the gap between where it would fall under inflation-uprating and £11,000 is larger. Nonetheless, putting up tax bands faster than inflation is not cheap. The modest increases proposed in yesterdays budget will, by the Treasury’s own reckoning, cost close to £1.5bn.

Also important is that the OBR’s downward revision of inflation makes both the Liberal Democrats and Conservatives tax ambitions, of a £12,500 personal allowance by 2020/21 and, in the Conservatives case, a £50,000 higher rate threshold, much more expensive. At the time of the Conservative party conference last Autumn, this package of tax cuts was costed at around £7.2bn. Factoring in the impact of lower inflation, this has risen closer to £9bn. With the Coalition setting out a fairly gentle path of rises out to 2017/18 yesterday, the assumption has to be that the remaining £6.5bn of tax cuts will be back-loaded in the remaining years of the parliament.

The Coalition have justified their expensive tax cut strategy by highlighting how many workers have been lifted out of tax in this parliament. But, as has been consistently pointed out, those on middle to high incomes benefit the most from personal allowance increases. And those on the lowest earnings do not benefit at all, as they aren’t earning enough to pay tax anyway. Our distributional analysis of yesterday’s announcements (see below) illustrates this regressive pattern. 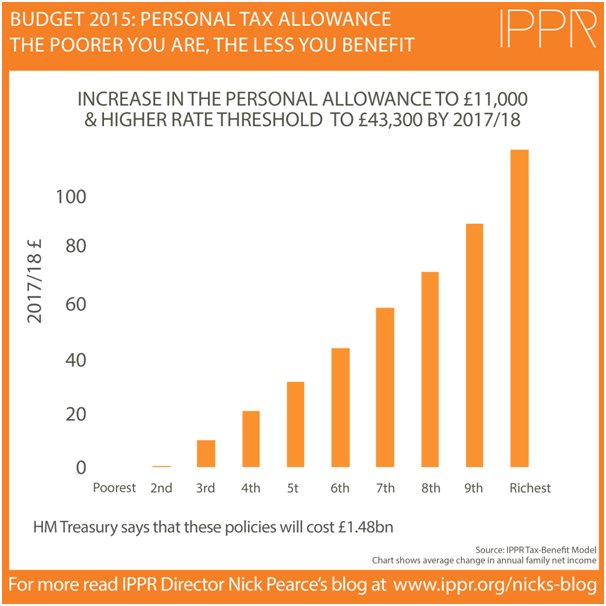 As the personal tax allowance has continued to rise above inflation, this latter group is growing in size. Using generous and expensive tax band up-rating as a strategy to support those on low incomes hasn’t just run out of road, it was flawed from the outset. Many commentators have pointed out that a rise in the threshold at which employees start paying NICs would be a better use of similar funds. Even better would be using this money to make Universal Credit and other in-work benefits more generous, since that would be much more tightly targeted at those on low incomes, and have little to no benefit for those higher up the income distribution.