Paul Krugman really managed to rile up the President of Estonia yesterday.

The Nobel Laureate was writing about how the country, as pretty much the only practitioner of austerity in Europe which isn’t back in recession, is the new poster-child for defenders of the practice. 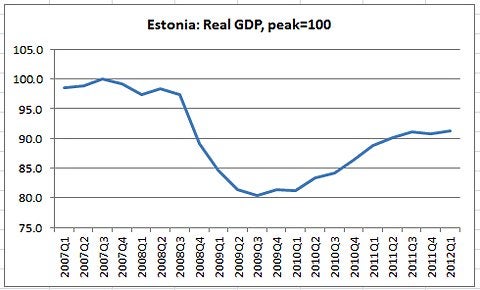 So, a terrible — Depression-level — slump, followed by a significant but still incomplete recovery. Better than no recovery at all, obviously — but this is what passes for economic triumph?

Which rather annoyed President Toomas Ilves:

Let’s write about something we know nothing about & be smug, overbearing & patronizing: after all, they’re just wogs: krugman.blogs.nytimes.com/2012/06/06/est…

Guess a Nobel in trade means you can pontificate on fiscal matters & declare my country a “wasteland”. Must be a Princeton vs Columbia thing

But yes, what do we know? We’re just dumb & silly East Europeans. Unenlightened. Someday we too will understand. Nostra culpa.

Let’s sh*t on East Europeans: their English is bad, won’t respond & actually do what they’ve agreed to & reelect govts that are responsible.

Chill. Just because my country’s policy runs against the Received Wisdom & I object doesn’t mean y’all gotta follow me. mobile.globalpost.com/dispatch/news/…

And with that, President Ilves turned his baseball cap backwards, got on his skateboard, and kickflipped into the sunset.

It does seem like someone has a sore spot about their country’s growth, and it’s not Paul Krugman. Estonia doth protest too much. That said, Ilves is undoubtedly the world leader who is most adept at using twitter for what it was built for: pointless squabbling and passive aggression.

Sadly, his fixed term comes to an end in 2016, which means we won’t get to see those diplomacy skills on a world stage when Estonia takes the rotating EU presidency in 2018.