George Osborne may have got the better of Ed Balls in the House yesterday (this morning’s papers make grim reading for the latter), but it’s the shadow chancellor who the public are siding with. A snap poll carried out last night by Ipsos MORI on the Autumn Statement shows that 40% agree with Balls that Osborne is “in denial about the cost of living crisis”, compared to 24% who agree with Osborne that his “long-term plan for economic recovery is working” (10% don’t know and 27% agree with neither).

Given that it was Balls’s “denial” line that prompted more jeers than any other from MPs, it’s striking that voters take the opposite view. As his special adviser Alex Belardnelli noted last night, “On 6pm news millions will have seen pictures of Cameron & Osborne laughing heads off while @edballsmp points out living standards falling.” 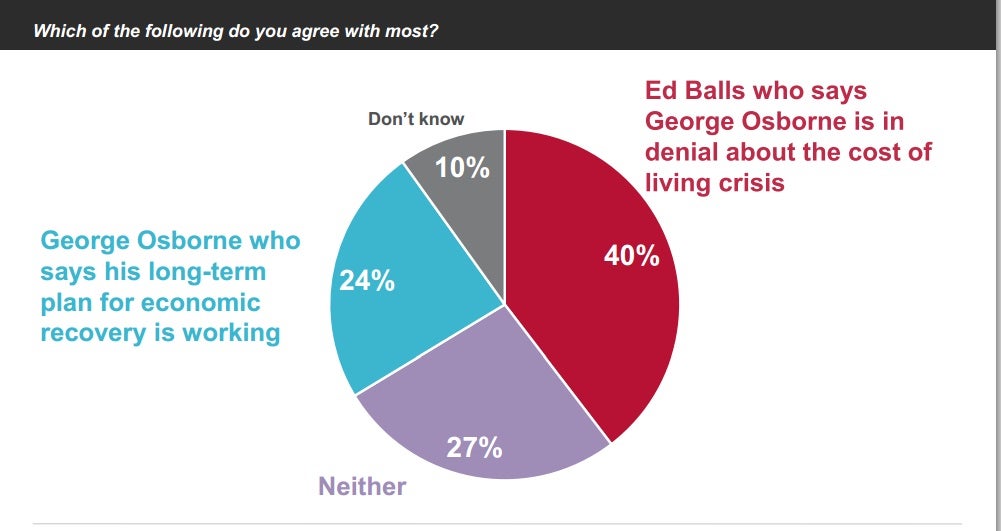 By a slim majority, voters believe that the Autumn Statement will improve the economy (40-38) but worryingly for the Tories, 54% believe that it will harm public services, compared to just 21% who agree. Osborne and David Cameron have long argued that austerity has proved that the state can do “more with less” but they’ve yet to convince the public.

The poll is also a reminder of how toxic the Tory brand remains. Despite measures such as the freeze in fuel duty, the introduction of universal free school meals for infant pupils, the £1,000 cut in business rates for small firms and the imposition of capital gains tax on foreign property owners (as opposed to tax cuts targeted at high-earners), the public are much more likely to believe that the Autumn Statement will benefit the rich than the poor.

Forty seven per cent believe that it was good for “rich people” (just 5% believe it was bad), while 44% believe that it was bad for the poor (14% believe it was good). Even worse for the Tories, 42% believe that the Autumn Statement was bad for “people like me”. This shows that the Tories aren’t just struggling to win support among “the poor” but also among the “squeezed middle”. If they’re to have any hope of beating Labour in May 2015, they will need these ratings to shift significantly over the next year.