The HFI is the consumer-centric brother to Markit’s more famous PMIs, which measure business activity across the construction, manufacturing and services sectors. The HFI questionnaire asks individuals about the state of their household finances, their expectations for their finances, and their expectations for the country’s finances. It’s then all compiled into a index where 50 is equal to “no change”. With that in mind, it’s easy to see that the state of Britain’s households are both equal to the highest they’ve been since February 2009, when the index began; and far, far below par: 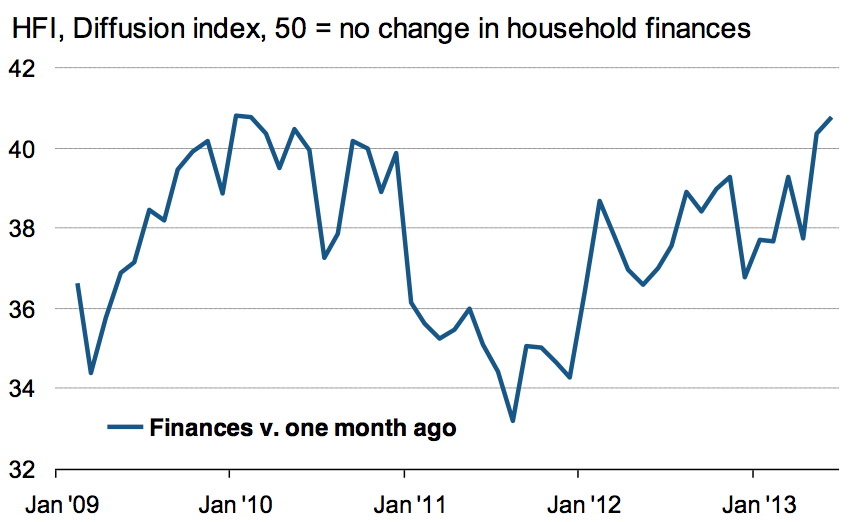 Improving household finance trends are an early indication that the UK economy has continued to strengthen in June. Households’ perceptions of financial stability are now at a level unsurpassed over the past four-and-a-half years. Better labour market conditions helped reinforce the upturn in households’ financial expectations during June, as rising levels of workplace activity translated into diminishing job insecurities. However, income from employment dipped at the fastest pace for five months, highlighting that pay restraint remains the order of the day. With households receiving little in the way of wage rises over recent months, a fall in inflation perceptions to their lowest since mid-2010 was an important factor in alleviating some of the strain on finances during June.

Some other tidbits from the release:

The index has the quirk of measuring perceptions, rather than concrete values. So there’s some – for instance, employment income – where the data gives some interesting insights. In nominal terms, wages have been rising, but in real terms they’ve been shrinking for years. What the index suggests is that workers don’t take either of those data points as the canonical description of their income, instead using some mixture of the two.

It also highlights the problems with an index like this, though. Regardless of inflation, it is probably untrue to say your income is falling if in nominal terms it’s not. Self-reported datasets, in the end, say more about how people feel than how they actually are. And people feel less bad now than they have been for quite some time – but they still aren’t exactly happy.