At a time of growing optimism among UK policy makers that the worst might be behind us, ASR’s latest Survey of UK Household Finances suggests that the erstwhile engine of the economy, the consumer, is a long way from returning to health. Despite the glee shown in some quarters over the UK economy’s 0.3 per cent growth in the first quarter of this year, 23 per cent of working-age households think the UK is in depression, while a further 45 per cent believe it is in recession. British households have become more, not less, concerned over the last five years, with one in four worried for their job security. This is generating a cautious attitude towards spending and saving decisions that shows no sign of letting up.

Prior to 2007, the UK experienced a rapid rise in household debt relative to incomes, reaching a level that surpassed all other G7 economies. There were three trends underlying this increase. First, the UK saw a substantial rise in income inequality, but one that was not matched by an equivalent disparity in spending habits. Second, the UK was subject to growing regional divergences, with average incomes in London and the South East pulling further away from the rest of the UK. Third, financial innovation allowed greater access to credit; by 2007, 12,000 different mortgage products were available in the UK, with roughly two thirds targeted at ‘credit impaired’ borrowers. Simultaneously, the average loan-to-income ratio among first-time buyers rose from roughly 2½ times to almost 3½. Together, these trends imply young households at the lower end of the income distribution living outside London accounted for a disproportionate share of the rise in debt.

Sure enough, the Household Survey indicates that these are the individuals now under most financial stress. Of those earning less than £15,000 per year, 93 per cent worry about their financial situation and 85 per cent believe they are saving too little. Of those in this income group with outstanding debts, 54 per cent feel they are too high relative to their incomes and 43 per cent have had trouble meeting their interest payments over the last year.

This matters for the macroeconomy, since it is the distribution of debts that determines their sustainability rather than their aggregate size. With credit remaining ‘tight’, fiscal consolidation hitting the regions hardest and youth unemployment running at elevated rates, it is little wonder that the economy has struggled to get back to growth – the UK’s old growth model is broken. Rebalancing is proving to be a slow and painful process.

This difficult backdrop is splintering the voting base away from the three traditional mainstream political parties, and has proved a gift for the insurgent UK Independence Party (UKIP). By far the biggest losers from UKIP’s rise have been Conservatives, who have shed as many as 25 per cent of their 2010 voters to the party.

Measures that might help those under greatest financial duress, such as reducing the pace of fiscal tightening, are likely to prove unpopular with those remaining faithful to the Tories. According to our survey, 92 per cent of Conservative Party supporters believe that addressing the national debt should remain a priority, and 64 per cent approve of the current government’s handling of the economy. More strikingly, however, it is not clear that such a move would curry favour among those it would be targeted at helping: those struggling to manage their own debts are marginally more inclined to agree that tackling the government’s debts should be a priority. The Tories look damned if they do and damned if they don’t.

A chasm has opened up between Tory supporters and the rest. Just 36 per cent of Conservatives say they are worse off since the last election, compared with 64 per cent of other voters. A striking feature of the survey is just how closely aligned UKIP, Labour and non-affiliated voters look in many respects (see chart 1) and how far from the rest the average Tory supporter is. In the absence of economic recovery, the Conservative Party will face an uphill struggle to win back swing voters. 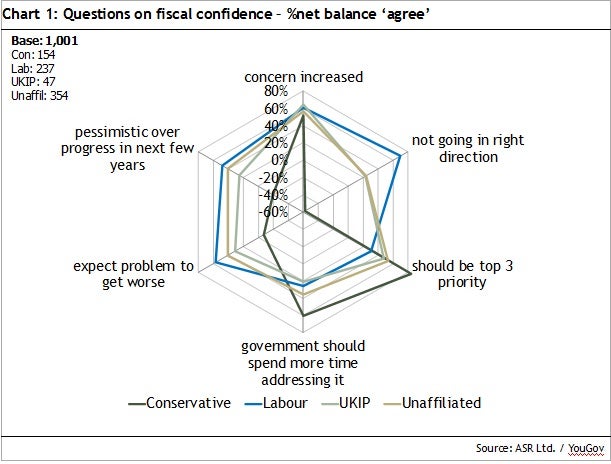 All that said, there could be a chink of light for the Conservatives. Our survey indicates a growing belief that house prices will rise over the coming 12 months; on balance, 17 per cent think home values are more likely to rise than fall. The long-term efficacy of the recently-announced Help to Buy scheme seems questionable, but it already appears to be stirring up interest in the housing market. The motivation behind this seems quite simple: historically, there has been a strong correlation between house prices and consumer confidence in the UK. It seems like a gamble, but with few alternative options, it is a gamble worth taking.