The Work Foundation has produced a new report looking into inequality in British cities. It’s a tricky subject to deal with, because urban inequality is very different in character from inequality on a national, or international, scale: for instance, the report finds that within an unequal city, people are far more concerned about “spatial inequality” – the existence of neighbourhoods with high levels of poverty – rather than what might be considered more robust measures, like wage or wealth inequality.

But there’s one thing which isn’t complex at all: the pattern of inequality. This graph is probably my favourite in the whole report: 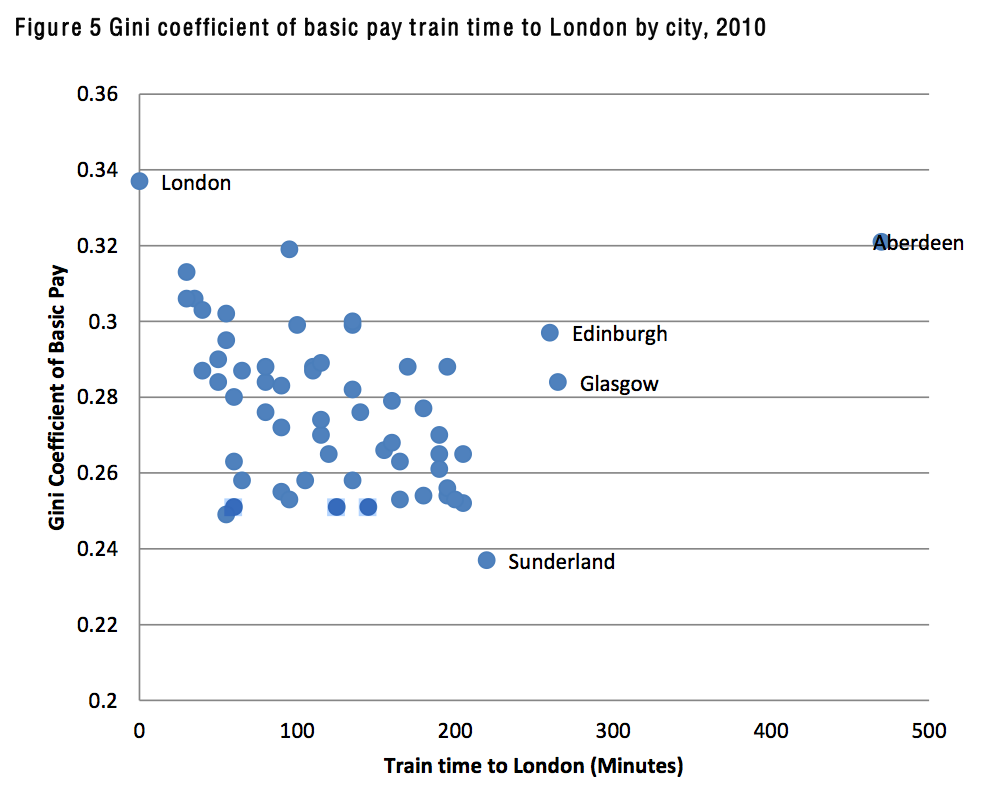 What you’re seeing there is a near perfect correlation between distance from London by train, and inequality. The further away you are from the capital, the more equal your city is. Except for Scotland. Edinburgh and Glasgow each have sizeable inequality themselves, and Aberdeen – over eight hours away from London by train – has the quirks of being an oil town completely wrecking the relationship.

But there’s an intermediate cause at work. It’s not – obviously – that being further away from London makes your city more unequal. It is, rather, that the driver of urban inequality appears to be wealth. The most equal cities are those which are smaller, have lower average wages and are coming out of the end of years of industrial decline; the report gives Burnley and Sunderland as examples.

Not only is there the fairly strong correlation between wealth and southernness, there’s also the fact that a rich city in the north is more likely to be connected to London by a direct, fast train – which increases the strength of the above correlation.

The report’s authors point out that this has interesting implications for tackling urban inequality. Most policy assumes that you want to make Sunderland more like London, not the other way round. And if the trick to reducing inequality is to lower average wages and deskill the economy, then that’s not particularly helpful advice.

But the really interesting question is whether you want to reduce urban inequality. The “Spirit Level” argument – that high inequality causes a number of bad outcomes – has only been shown to apply on the national level. Is there anything bad about inequality in cities on its own terms?

The end result is that cities with problems with inequality would be better served focusing on the bottom end. On the national stage, where a redistributive tax system exists and where the intrinsic problems of inequality are known, it makes sense to take from the rich and give to the poor, but on the local level that’s less clear. Strategies like the living wage, reducing the cost of living, and supporting low-skilled workers who want to develop their abilities are more likely to work on an urban level – and even if they don’t directly reduce inequality, they’re hardly bad things to have anyway.

Of course, given the standard of some politician’s use of data, it’s just as likely that the message drawn from this report will be “if you destroy train lines, inequality will fall”. Which would be less than ideal.