Last week, a study released by the European Central Bank showed that the median net wealth of German households was the lowest in the eurozone – with the median Italian and Spanish households being nearly four times richer.

The study sparked a debate over how far apparently poor taxpayers in Northern Europe should have to support the bailouts of the “wealthy” Southern European, but a response this week from the double-team of Paul De Grauwe and Yuemei Ji highlights the other side to the initially reported data.

The Wall Street Journal was typical in its reporting of the paper, with Brian Blackstone and Nina Koeppen writing:

[T]he report offers a reminder that citizens in some of the countries hardest-hit by Europe’s debt crisis aren’t as bad off as many believe.

The question of how much taxpayer money should be put up to bail out governments in Greece, Cyprus and Portugal tops the political agenda in Germany, Europe’s biggest economy and financial backer…

By one ECB measure of typical households, Germany is the poorest country in the euro bloc, behind even Slovakia and Portugal. A number of factors appear to have skewed the results, such as the emphasis on homeownership, household size and small-business ownership that favors countries in Southern Europe.

But de Grauwe and Ji argue that the rest of the data in the paper presents a different picture. Compare and contrast the distributions for the ten biggest Eurozone countries when the mean and median household wealth is examined: 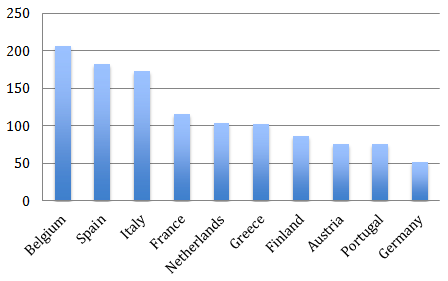 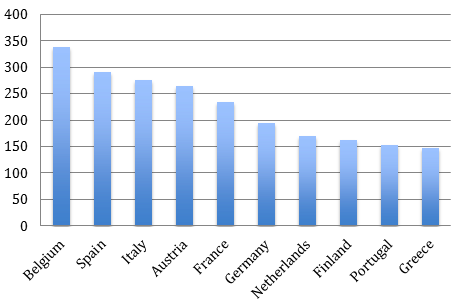 Put differently, there is a lot of household wealth in Germany but this is to be found mostly in the top of the wealth distribution.

That’s partially because Germany itself is a relatively unequal society, but also due to the lack of widespread homeownership. As a result, poorer German households spend the same amount on housing as in comparable countries, but don’t come out of it owning a house.

Germany also has a different distribution of wealth within the country’s total capital stock to many other nations. Far more wealth in Germany is held by corporations and the government, meaning that citizens appear poor on official statistics even as the nation itself is wealthy: 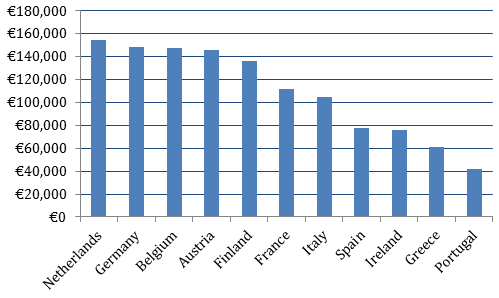 What this really tells us isn’t the merits or otherwise of distributing wealth from Germany to the European south. That’s a question which can only be answered by asking what the value of keeping the euro alive is, and whether there’s any way it can survive without a transfer of some sort. But it does tell us where, within the Northern countries, the money to do that lies. It’s not with the “normal German”, who holds surprisingly few assets – instead, it’s with wealthy Germans, and, overwhelmingly, the governments and corporations of Northern Europe.

There is the money to save the south, in other words, but there might not be the will to take it from where it needs to come from.