The Prime Minister’s speech on the economy on Thursday was, leaving the policy aside, notable for some of its analytical claims.  Simon Wren-Lewis’s dissection is thorough and comprehensive; Danny Blanchflower and Adam Posen have a lengthy discussion here . In particular, much has already been written about the Prime Minister’s misinterpretation of the OBR’s position on the impact of fiscal consolidation on growth; for a thorough explanation, see Duncan Weldon.

But I wanted to focus on another specific passage of his speech, since it seems directed at, among others, us here at NIESR, and where the Prime Minister cites the work not of the OBR but of the IFS to put the counterargument. The Prime Minister argued:

So those who think we can afford to slow down the rate of fiscal consolidation by borrowing and spending more are jeopardising the nation’s finances. Labour’s central argument is exactly that.  They say that by borrowing more they would miraculously end up borrowing less.  Let me just say that again: they think borrowing more money would mean borrowing less.Yes, it really is as incredible as that.The Institute of Fiscal Studies has completely demolished this argument.They say that if we had stuck to Labour’s plans we would be borrowing an extra £200 billion..”

I am not sure whether the Prime Minister is correct in his description of Labour’s policy, but in any event he is of course perfectly entitled to critique it.  But the argument that we can afford to slow fiscal consolidation, and that under some circumstances that might have little or indeed no impact on borrowing, is made by numerous economists, including us here at NIESR.  And the assertion that the IFS has “demolished” it is false.  In fact, quite the opposite; as I discuss below, the macroeconomic analysis presented in the IFS’ most recent Green Budget argued explicitly that “slowing the rate of fiscal consolidation” would be “appropriate”, and that doing so would not “jeopardise the nation’s finances.”

Now, most of the time, these indirect impacts will not offset the direct ones.

Putting up taxes cuts the deficit, as you’d expect. But we are not in normal times. In current circumstances – with output well below capacity, long-term real interest rates exceptionally low, and monetary policy apparently ineffective – fiscal consolidation is much more likely to damage growth, and hence reduce revenues, than in normal times, as I explain here.

As Simon says, the arithmetic of this was set out by Brad Delong and Larry Summers, the former US Treasury Secretary, here.  Whether higher borrowing in the short term leads to lower borrowing over the medium to long term depends on a number of factors; the level of real interest rates, the impact of the extra borrowing on growth,  the responsiveness of tax receipts and spending to growth, and the extent to which a short-term growth shortfall does long-term damage to the economy.  All of these are empirical questions, to which the answers may change over time.

“Indeed, under what we defend as plausible assumptions, temporary expansionary fiscal policies may well reduce long-run debt-financing burdens. These conclusions derive from even modest assumptions about impact multipliers, hysteresis effects, the negative impact of expansionary fiscal policy on real interest rates, and from recognition of the impact of interest rates below growth rates on the evolution of debt-GDP ratios.”

In other words, under current circumstances, it’s quite plausible that borrowing more could lead to borrowing less (over the longer term). As I wrote at the time:

“in economies like the US and UK, the case for rapid consolidation is exceptionally weak. Although multipliers in the UK are undoubtedly lower than in the US, the evidence for substantial hysteresis effects is probably rather stronger; the basic logic still holds.”

Similar reasoning has led IMF economists to come to a very similar conclusion, in a paper published just last week, which:

“provides empirical evidence supporting the hypothesis that fiscal consolidation can raise the debt ratio in the short-term”.

Paul Krugman discusses this paper at greater length here. But what about the IFS?  Has it indeed, as the Prime Minister implies, engaged in vigorous debate with Delong and Summers, the IMF, not to mention me, about our assumptions and arguments, and “completely demolished” them? No, of course not; macroeconomic analysis is not the IFS’ specialism. The IFS analysis to which the Prime Minister refers predates the Delong and Summers paper and that of the IMF.  More importantly, it does not address the arguments they and I make at all, because it is not about the macroeconomic impacts of fiscal loosening (on growth, interest rates, revenues and spending) at all.

The Prime Minister is correct in his subsequent sentence: that the IFS said that if the government had continued with “Labour’s plans” (that is, not introduced extra tax rises and spending cuts in June 2010) then £200 billion more borrowing would have been required.  But, because the IFS did not estimate the impact of those tax rises and borrowing on growth – they assumed everything else stayed the same – that’s a statement of arithmetic, not a macroeconomic analysis. If you assume that tax rises and spending cuts don’t impact growth, then of course they reduce the need for borrowing; the IFS was simply quantifying that. The IFS did say:

“Of course, there are uncertainties around any estimates of the impact of policy changes on overall borrowing and it is possible that some of the weaker outlook for the economy has actually been caused by a detrimental impact of the additional fiscal consolidation announced by the coalition government that is not captured in the official estimates of the measures’ impact on revenues and spending. However, the error in estimating the size of the policy impact would have to be implausibly large to lead one to conclude that borrowing would actually have been lower in the absence of the additional tax rises and spending cuts that have been announced since May 2010.”

So it was clearly the IFS view at the time that the additional tax rises and spending cuts had reduced borrowing; but this was not based on any substantive analysis, nor quantified; the £200 billion figure does not take account of the growth or other indirect impacts. Nor, importantly, was it a statement about the general principle of whether slowing fiscal consolidation would lead to higher or lower borrowing, but rather specifically about the measures introduced in 2010, not about the impact of more borrowing now.

So what does a proper macroeconomic analysis tell us?  Can austerity be “self-defeating”, even on its own terms?  In a more recent analysis, Dawn Holland and I examine this question, not just for the UK but for the EU as a whole. We found that the UK’s fiscal consolidation strategy has reduced growth quite significantly, and that in turn means that the reduction in borrowing has been much less than might have been expected.  But it doesn’t mean that we’ve actually borrowed more.

So we agree that the government’s tax rises and spending cuts have indeed, as the IFS says, reduced borrowing, although not by nearly as much as the government hoped – one reason, albeit not the only one, that they have had to abandon their fiscal targets.

However, when you look at the EU (including the UK) as a whole – that is, when you take account of the negative impact of fiscal tightening not just in individual countries, but across the EU – the picture changes dramatically:

“in current circumstances, fiscal consolidation is indeed likely to be “self-defeating” for the EU collectively.  As a result of the fiscal consolidation plans currently in train, debt ratios will be higher in 2013 in the EU as a whole rather than lower.  This will also be true in almost all individual members states (including the UK, but with the exception of Ireland).   Coordinated austerity in a depression is indeed self-defeating.”

In other words, for the EU (including the UK) collectively, “borrowing less” has in fact meant “borrowing more”, as this chart shows. 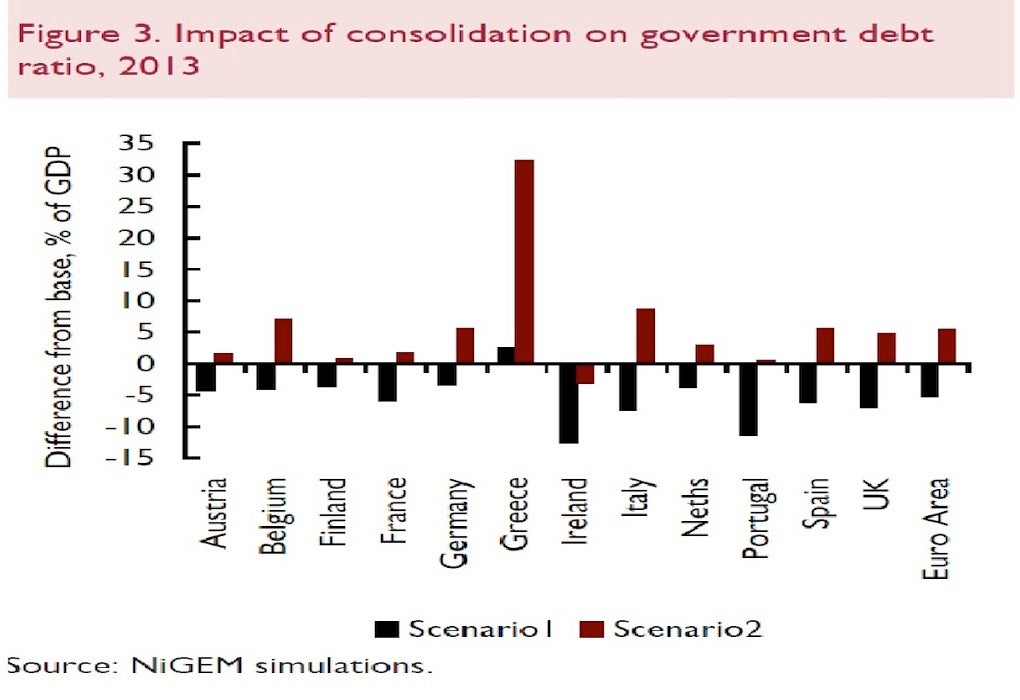 But of course the Prime Minister’s speech – note the present tense in the paragraph above –  is much less about the past than about what should happen now, and in particular in the upcoming Budget.  His real target is “those who think we can afford to slow down the rate of fiscal consolidation by borrowing and spending more.”  By that he presumably means those like NIESR, Martin Wolf, the Economist, the IMF, and so on, who support extra government borrowing now, in particular to finance public sector investment.  For example, the Economist called last week for an extra £28 billion of public investment, while I argued last year for £30 billion.

So would borrowing more to spend more on investment – the proposition actually on the table – lead over the medium term to more or less borrowing? Well, the Prime Minister may not have noticed, but the IFS did actually have something to say about this in their Green Budget a few weeks ago. Oxford Economics (OE), who do the macro analysis underpinning the Green Budget,  analysed the impact of £10 billion extra debt-financed capital spending in each of the next two financial years. 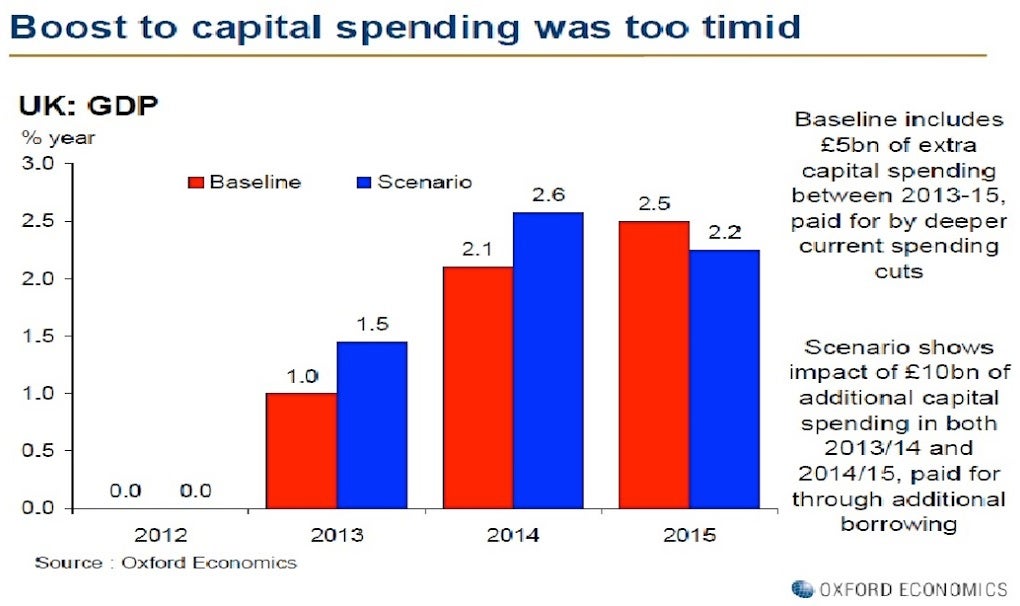 Their conclusion – and OE’s macroeconomic model is quite similar in structure to those used by both NIESR and the OBR – is that it would boost growth by 0.5% this year and next (with some of the impact reversing in the following year). Assuming, conservatively, that output returns to the base case scenario in 2016, the cumulative increase in output over the 2013-15 period is a little over 2 percent.  Their conclusion:

“it would have been possible to boost short-term growth prospects through higher capital spending..with stronger growth yielding higher tax receipts, the [short-term] impact on the deficit would have been relatively small. We feel this would be an appropriate level of stimulus.”

So we can add OE to the long list of “those who think we can afford to slow down the rate of fiscal consolidation by borrowing and spending more”, and who the Prime Minister thinks are “jeopardising the nation’s finances.”

OE don’t directly quantify the impact of this extra growth on borrowing over the medium term. But, usefully, the Treasury do, in their paper here. They conclude a “1 per cent increase in output relative to trend after two years is estimated to reduce the ratio of public sector net borrowing to GDP by just under ¾ percentage point.”

So the impact of this extra output on borrowing will be, just by simple arithmetic, be a cumulative 1.5% of GDP – or somewhat more than the £20 billion extra up-front borrowing.  In other words, if you believe the Green Budget analysis, and the Treasury’s own calculations – both of which are very much mainstream macroeconomic modelling exercises – borrowing to invest now is indeed essentially free.

In short, slowing down the rate of fiscal consolidation would not jeopardise the nation’s finances; if anything, done sensibly, the opposite.  This claim is neither incredible nor miraculous, but endorsed by those economists who’ve looked carefully at the theory and at the empirical evidence.  And far from “demolishing” this argument, the last IFS Green Budget provided yet another piece of analysis that reinforces it. What was always “incredible” was the  government’s claim that rapid fiscal consolidation would not significantly reduce growth, and hence make it harder to repair the public finances; sadly, we have not been afforded any miracles.

This article was originally posted on Jonathan Portes’ blog Not the Treasury View, and has been reposted here with permission.