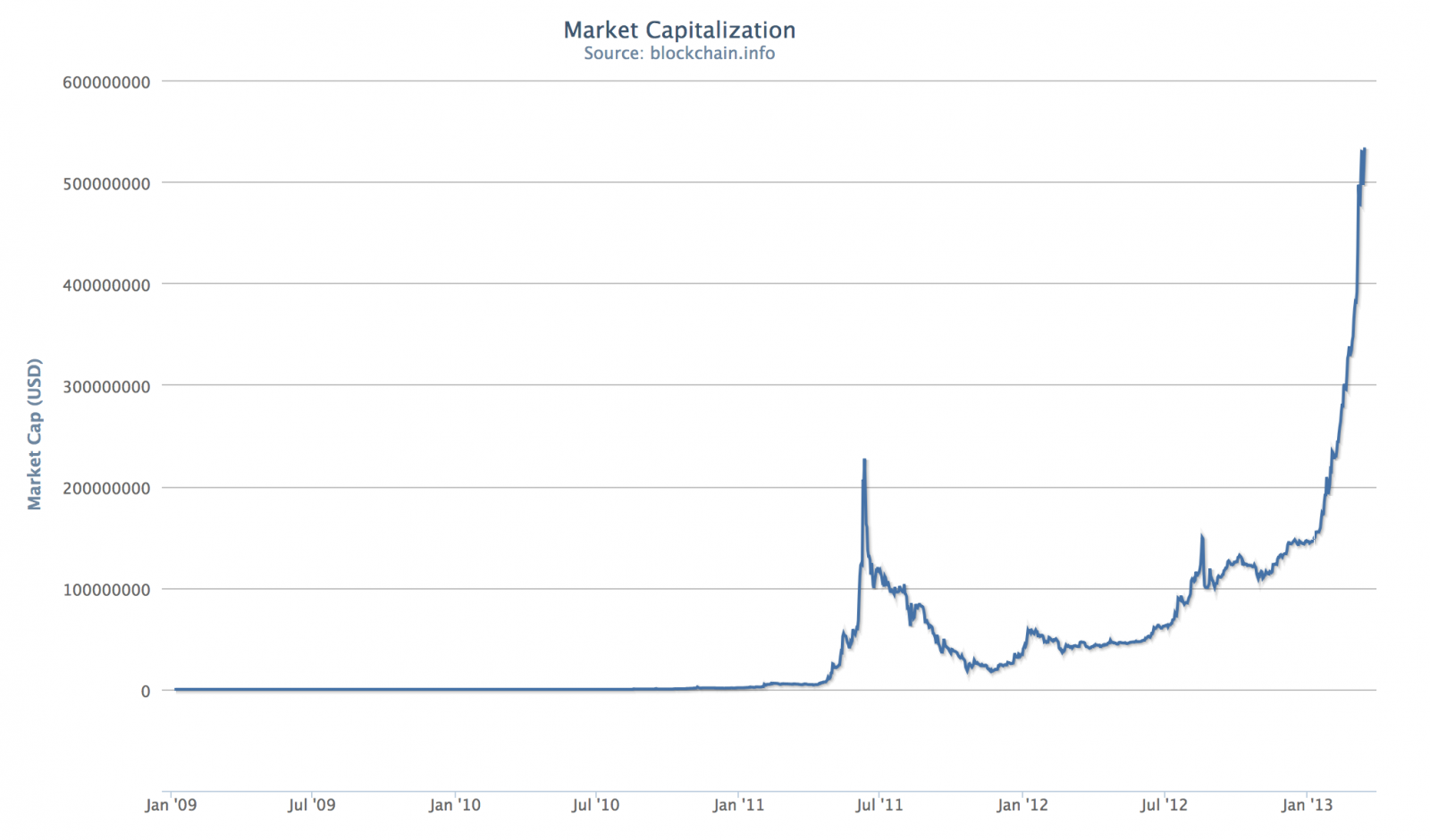 That’s the market capitalisation of Bitcoin, an innovative fiat currency which relies on some fancy cryptography to create a perfectly decentralised and unhackable store of value. The graph shows the total value of all bitcoins in circulation — and it’s currently peaking at a little over half a billion dollars.

In a sense, Bitcoins are the ultimate fiat currency. There is absolutely nothing valuable about them except the extent to which others are prepared to take them as payment for goods and services. The willingness relies on a certain level of trust that the currency will stay a useful store of value, measure of exchange and unit of account in the near future; but whereas normal currencies derive the trust from the fact that they are backed up by respectable governments and independent central banks, Bitcoin derives it from a complex, and essentially permanent, set of rules which issue new bit coins at a steadily declining rate until the early 22nd century, when the total quantity of bitcoins in circulation will be fixed forever.

Currently, bitcoin is very useful for fringe-legal transactions, and as a digital-native currency, it has potential to be used in a wide array of web services. But that’s not why the value of the total economy has more than tripled since January. For that, look to lessons we learned over four hundred years ago.

The South Sea bubble is one of the most famous boom-and-bust cycles in history. At the peak of the madness, famously, a huckster appeared public advertising stock in “a company for carrying out an undertaking of great advantage, but nobody to know what it is”. Naturally, he disappeared soon after.

But looking back at contemporary sources reveals something else which is just as important: very few people caught up in the madness thought that they were buying something innately valuable. These weren’t naïve investors spending exorbitant sums on stock which they thought would vest unrealistic rewards; instead, they knew full well the bubble they were buying into, but thought that they could sell out of it at profit before the whole thing came crashing down. Some did; but inevitably, many others failed.

Much the same seems to be at play in the Bitcoin ecosystem. It’s not just people like Hugo Rifkind, who accidentally made £41 from his foray into bit coin investing; Timothy Lee, a writer for Ars Technica, holds nearly a tenth of his investment portfolio in bitcoin, having bought in last January and seen a ten-fold increase in value.

But while there’s been a massive increase in bitcoin price, there’s not been anywhere near an equivalent increase in the currency’s use. A glance at blockchain.info, which displays all transactions, shows that the vast majority of bitcoin transactions—by number, if not by value—are made at the site SatoshiDICE, a gambling organisation. In fact, the ever-increasing value of bitcoins is like to act as to depress the bitcoin economy, as people decide to hold on to their money rather than exchange it for services, knowing that it will surely increase in value.

The crash will come. At the heady peaks it’s at right now, only the slightest spark will be required to turn the trend negative. In 2011, the previous bubble burst when Mt Gox, then the most popular bureau d’exchange for the fledgeling currency, was disastrously hacked. This time, I doubt it would take that. The peaks are so high, and so many people have so much money “invested” in the currency, that the rush to be the first out of a bear market will be vicious to behold.