George Osborne has long assumed that you can’t cut welfare spending too hard. The Chancellor reduced benefits by £18bn in the 2010 Spending Review and by another £3.7bn in last year’s Autumn Statement after the Lib Dems vetoed his preferred figure of £10bn. The common belief among the Tories is that there is no area of spending the voters would rather see shrunk.

But a new ComRes/ITV News poll on the government’s spending plans suggests this assumption is mistaken. It found that a majority of people either want welfare spending to be increased (43 per cent) or frozen (29 per cent), with just 27 per cent in favour of further cuts. Welfare is the fourth most popular area for government spending, with transport, defence, public sector pensions, local government and international development all viewed as more deserving of cuts.

The most popular area for spending is the NHS, a vindication of Osborne’s decision to protect the service from cuts. Just five per cent of voters believe health spending should be reduced and 71 per cent believe it should be increased. 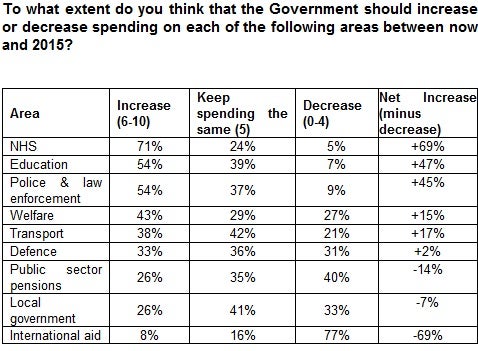 Ahead of this summer’s Spending Review, which will set departmental spending limits for 2015-16, the poll should strengthen the cause of Danny Alexander and Iain Duncan Smith who have formed a united front against further welfare cuts. Those such as the Defence Secretary, Philip Hammond, who have argued that their departments should be protected, with the burden of cuts instead falling on welfare, will no longer be able to claim that they have the public on their side.