A piece by John Rentoul in today’s Independent has been making waves. Rentoul argues that, because inequality in Britain fell in 2010-2011 – the first year of the Conservative government – the Coalition has actually lived up to its promise to ensure that “we’re all in it together”.

In June, the Institute for Fiscal Studies (IFS) published an analysis of official data that found that, although all after-tax incomes fell in the first year of the Coalition (2010-11), higher incomes fell more than lower incomes, resulting in a more equal distribution.

This is true. Although it’s hard to check, because he doesn’t cite with any specificity, it appears that these are the findings he’s referring to:

Three different measures of inequality, including the internationally-accepted Gini coefficient, all fell sharply in the first year of the coalition government. The Gini in particular fell to levels which Britain hasn’t seen since 1997.

But although these are after-tax measures of inequality, attributing all the changes to the tax system would be incorrect. And although they happened during the first year of the coalition government, giving credit to that government would be inaccurate.

The IFS explain why inequality fell so sharply in section 3.6 of their report. Part of the rise in equality was because “the largest falls in income took place at the very top of the income distribution”; the introduction of the 50p income tax rate “is one of the major drivers” of that fall. So a measure enacted 37 days before the coalition came to power – and halved in magnitude in that coalition’s second budget – is responsible for a lot of the fall in inequality which Rentoul is attributing to Cameron. Perhaps the Government deserves credit for not scrapping the tax band completely, but normally one praises people for doing good, not for doing less bad than they might have.

The IFS doesn’t break out any further causes of the 2010-11 rise in equality, but it does point out that, between 1997 and 2010, Labour supported the bottom part of the income distribution with “significant increases in the amount of redistribution”. It adds that, since the Government plans further spending cuts, “changes in private incomes and government tax and benefit policy… seem likely to lead to increases rather than decreases in income inequality in the coming years.”

In other words, the Government would be silly to stake its reputation on a chance fall in inequality due mostly to the actions of its predecessor – because what it has got planned will make the situation much, much worse.

Rather than looking at what the government inherited, Rentoul should instead have looked at what it’s got planned. That was in the IFS report as well. Here’s the chart summarising it: 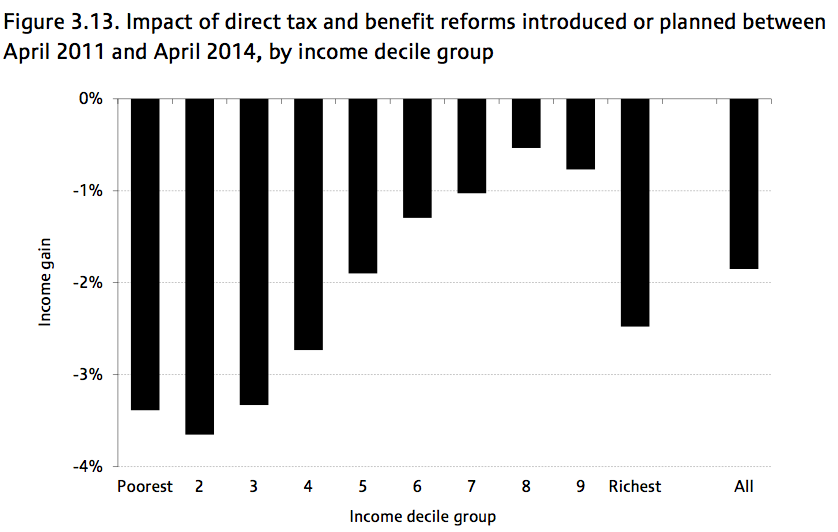 That’s rather less sharing of the pain than Rentoul implied. The bottom four deciles are taking by far the most pain proportionally, and only then does the richest decile take its portion of the cuts.

The reason why the coalition hasn’t been shouting from the rooftops about narrowing the gap between the rich and the poor is because it didn’t do it. To quote Cameron from what seems like every Prime Ministers Questions since he was elected, “it was the fault of the last Labour Government”. We will have to wait a bit longer to see what effects his vision of equality in Britain turns out to have; but judging by the changes he has implemented, they won’t be pretty.