Last week might go down as one of the most important ever for monetary policy. No paradigms have shifted, and no great new knowledge has presented itself to the world, but elites across the globe have shown an unexpected ability to actually listen.

On Wednesday, the US Federal Reserve announced that it was adopt what is being called the “Evans Rule”, after the Chicago Fed President who proposed it. The American central bank has always had a dual mandate – it is charged with looking after inflation and unemployment, in contrast to the Bank of England’s “price stability” mandate – but this new rule makes that mandate far more explicit.

The Committee decided to keep the target range for the federal funds rate at 0 to 1/4 percent and currently anticipates that this exceptionally low range for the federal funds rate will be appropriate at least as long as the unemployment rate remains above 6-1/2 percent, inflation between one and two years ahead is projected to be no more than a half percentage point above the Committee’s 2 percent longer-run goal, and longer-term inflation expectations continue to be well anchored.

In other words, the interest rate is guaranteed to stay at its historic low of 0-0.25 per cent until unemployment is below 6.5 per cent or inflation is above 2.5 per cent. It replaces an earlier guarantee that rates would be kept low until 2015, although the reserve maintains that it expects the guidance to be roughly similar in practice (that is, they think it likely that one of those targets will be hit in that year).

The plan behind this sort of guidance is based on the fact that growth – the very thing which the Fed ought to be trying to encourage – frequently leads to inflation. For example, as the economy recovers, young unemployed people are going to be getting jobs and moving out of their parent’s homes, some into new houses, putting pressure on the market. At the same time, they may start driving into work, increasing demand for fuel. That will, all else being equal, increase prices for those goods, and so increase inflation; but in this sort of situation, that’s definitely a price worth paying.

Without the Evans rule, or something similar to it, businesses would expect that growth-led spike in inflation to be followed by a tightening of monetary policy. As a result, they may be unwilling or unable to borrow at the low rates we have now, for fear that they will rise shortly after – creating a vicious cycle. Fear of tightening policy prevents the growth which would lead to that policy getting tightened.

Under the new rules, Americans can be assured that, unless inflation exceeds its target by quite some margin, the Fed will continue its pro-growth policy even while growth is actually happening.

A similar change was suggested by future Bank of England governor Mark Carney in a speech on Tuesday night. Talking about the role guidance plays in central bank governance, Carney had good things to say about nominal GDP (NGDP) targeting. This involves the bank targeting, not a flat level of inflation, but a level of nominal GDP. The effect is that in periods of low real growth, the bank is prepared to tolerate much higher inflation than it is in periods of high growth – leading to similar outcomes to those described above.

In addition, since an NGDP level, rather than growth rate, is targeted, even higher inflation is tolerated in periods following a recession, as Carney explains (via FT Alphaville):

adopting a nominal GDP (NGDP)-level target could in many respects be more powerful than employing thresholds under flexible inflation targeting. This is because doing so would add “history dependence” to monetary policy. Under NGDP targeting, bygones are not bygones and the central bank is compelled to make up for past misses on the path of nominal GDP (chart 4) 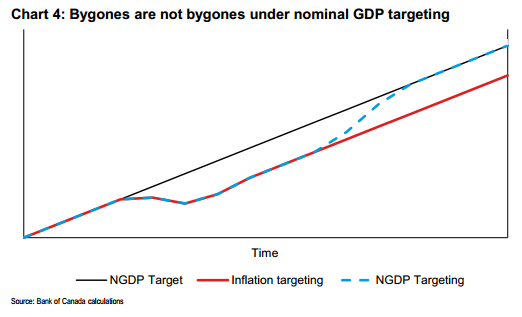 Carney’s speech was far less concrete than the Fed’s actual adoption of unconventional policy guidance – and he also faces higher hurdles bringing such a change in. The Bank of England is statutorily required to target “price stability”; most commentators expect NGDP-targeting to therefore require at least a bill through parliament, although a minority argue that it could be an acceptable interpretation on Carney’s part of that stability mandate.

And finally, just yesterday, Shinzo Abe won the Japanese election on a platform of forcing the Bank of Japan to do more monetary easing. He said before the election that his number one priority was to defeat deflation, with the *FT* reporting that:

He dismissed as “meaningless” recent moves by the BoJ, saying an October ¥11tn increase in the central bank’s asset purchasing programme was too limited to change market sentiment and that the central bank and government should agree on an inflation target of perhaps 2 or 3 per cent.

“The time has come for a general mobilisation of all policy measures to get rid of deflation,” said Mr Abe, a former prime minister who resigned in 2007 after a setback-strewn year in office.

The BoJ should embrace “unlimited easing” and also consider cutting the 0.1 per cent overnight interest paid on banks’ deposits at the BoJ to zero or a negative rate, in order to “strengthen pressure to lend”, he said in a speech in Tokyo.

Questions have been raised as to whether this is a genuine opinion of Mr Abe’s about monetary policy, or merely an attempt to secure seignorage-driven income to fund higher government spending; but either way, the markets appear to trust the outcome, with the Yen plummeting and Nikkei surging