One of the longstanding disconnects between empirical and theoretical economics is the fact of “nominal wage rigidity”. This is the fact that, no matter what level inflation is, nominal pay cuts are incredibly rare. Most of the time, economics is concerned with “real” price levels – that is, prices taking inflation into account. That idea leads to the idea of “real” pay cuts – when your wage rises slower than inflation.

But while real pay cuts are relatively easy to force on employees, nominal ones – when the actual numerical value of their salary is reduced – are significantly harder.

In graphical form, that phenomenon looks like this, from the San Francisco Fed: 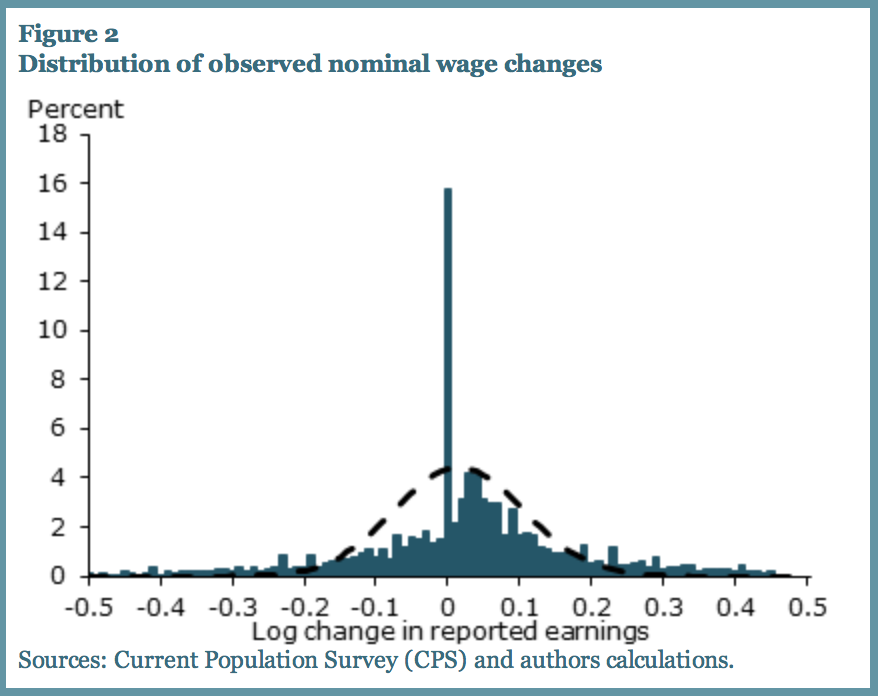 The bars represent the actual wage changes – and that spike at zero is all the people piling up against downward nominal wage rigidity. (If inflation were higher, the peak of the distribution would be further to the right, and that spike would be smaller.)

But why does this happen? The Jacobin‘s Seth Ackerman, reporting on the downfall of US snack food manufacturer Hostess, quotes Truman Bewley’s seminal 1999 book Why Wages Don’t Fall During a Recession. Bewley actually asked employers why they didn’t cut wages:

All of the following are quotes from different interviewees: “I have never cut wages.” “I never froze or cut pay, and never will.” “[A pay cut] is out of the realm of consideration.” “Such a thing is just not done.” “I have never cut anyone’s pay.” “I know something real. Never cut wages.” Over and over, the employers talked about disastrous turnover, bad morale, little acts of sabotage that would sap profits and make their lives miserable.

“If I cut pay, people would leave out of rage, even though they have no place to go,” said the owner of a car dealership with 30 employees.

It took a lot of work for Bewley just to find any companies that had cut their workers’ pay. “At the end of most interviews, I asked whether the respondent knew of any firm that had recently cut pay, and few had heard of any,” he wrote. “All but a few accepted wage rigidity as a fact of life.” But after much searching, he did manage to track down 36 businesses that had cut pay in the past half-decade or so, and he was able to gather more detailed information for 16 of them. In 13 of the 16 cases, the pay cuts were 10% or less. Many of the cuts were explicitly temporary. Of the remaining three cases, at least one involved cuts in work hours to make up for the pay cut.

As Ackerman argues in his piece, nominal wage rigidity is a fact of economics, and one that nearly every employer learns to live with, even when times are hard. The argument – much expressed in the case of Hostess, which was forced to close after workers refused to accept a 30 per cent pay cut – that these pay cuts must occasionally be imposed to bring wages to a “competitive” level is thus absurd. The actual way to phrase it would be that the company was uncompetitive. A competitive company doesn’t find itself in the position where it needs to push a hail-Mary attempt to desperately reclaim some extra value from its workers even as it knows they are unlikely to relinquish it.