Are politicians routinely making up expenses? A simple statistical test suggests not.

If you take all those leading digits, from all the countries, then overall, you might naively expect to see the same number of ones, fours, nines, and so on. But in fact, for naturally occurring data, you get more ones than twos, more twos than threes, and so on, all the way down to nine. This is Benford’s law: the distribution of leading digits follows a logarithmic distribution, so you get a “one” most commonly, appearing as first digit around 30% of the time, and a nine as first digit only 5% of the time.

This pattern should repeat for almost any data which matches the key condition of spanning a large range of sizes. Take the example above, world populations, which goes from 800 in the Vatican City to 1.35 billion in China. But one category of data which rarely obeys the law is that where the numbers are made-up. When people are trying to “randomly” write down numbers, they rarely do it very well, more frequently following the intuition that random data ought to have just as much chance of starting with any given digit.

The value of MP’s expenses certainly spans several orders of magnitude. Excluding repaid claims, expenses in the latest tranche, released last week, span from a value of 10p (reconciliation for a travelcard between Euston and Coventry) to £9900 (for staffing costs in Woking constituency office).

So does the data follow Benford’s law? It largely does: 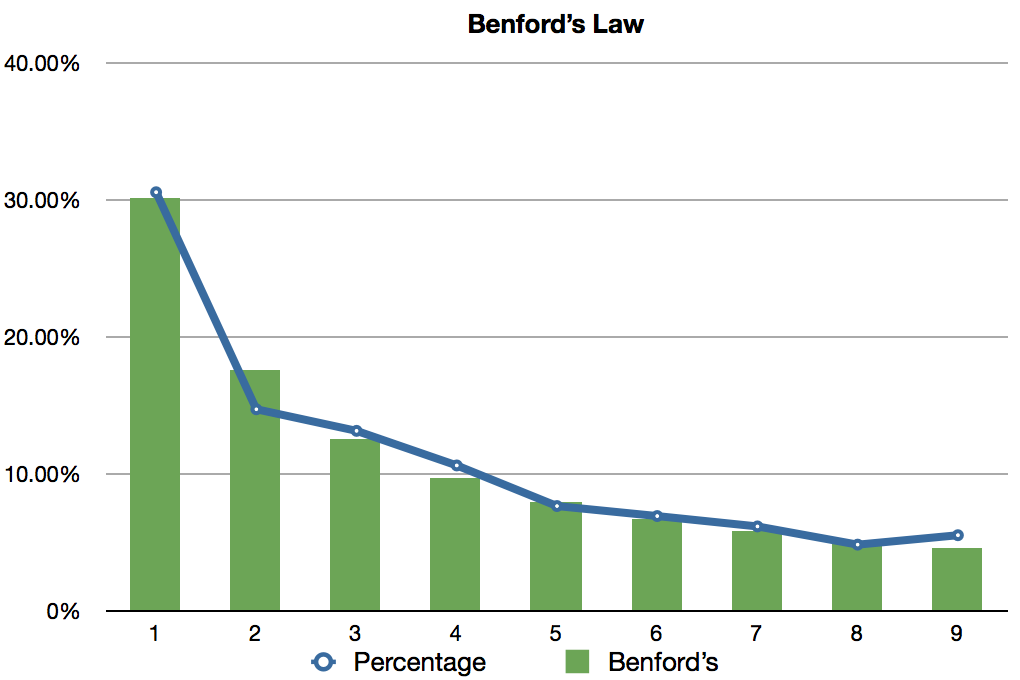 The largest variation is a 3 percentage point difference between the expected number of leading 2s and the actual number, with most other digits being present in slightly larger quantities than expected.

Scanning through the data, it’s easy to see why this is. There are a large number of claims which are made repeatedly. For instance, 18 different MPs claimed £139.26 for the same twin pack of HP toner cartridges; while nearly every claim for petrol costs came in between £10 and £19.99, boosting the 1s’ count again. Conversely, there simply weren’t that many must-have services which began with a 2 (although a lot of things MPs need do, apparently, cost £20 on the dot, from venue hire to cleaning bills and car parking).

None of which means there may not still be fraud in the expenses. It simply means that the actual values being claimed for have been drawn from real life. MPs are not, on the whole, making up numbers on the spot as the fill in expense forms; whether what they are claiming for ought to be paid out of the public pocket, statistics are less likely to help with.

(As an aside, it’s actually surprising that the figures match Benford’s law quite so well; while MP’s may not be choosing the numbers they submit, the people who set the prices clearly are. That’s probably the reason for the slight uptick in the 9s, for instance; a lot of things which may cost £10 instead are charged as £9.99. It seems that there are either enough counter-examples that it gets balanced out, or lots of claims for things like mileage, which have no set price)