Now that Barack Obama has won re-election, the focus in the US has turned to the next crisis brewing: the fiscal cliff. The event was named by Fed Chairman Ben Bernanke, and although I have always preferred “taxmageddon“, it’s stuck.

The “cliff” is the automatic introduction of roughly $600bn of tax increases and spending cuts, and is due to hit in early 2013, and the nature of what it involves has led some, like Annie Lowrey, the New York Times’ economics reporter, to argue that a more apposite name might be the “austerity cliff”. In fact, if it hit, the fiscal cliff would be one of the most severe austerity policies the world had ever seen. This chart, from Quartz‘s David Yanofsky, lays it out in comparison to other notable contractions: 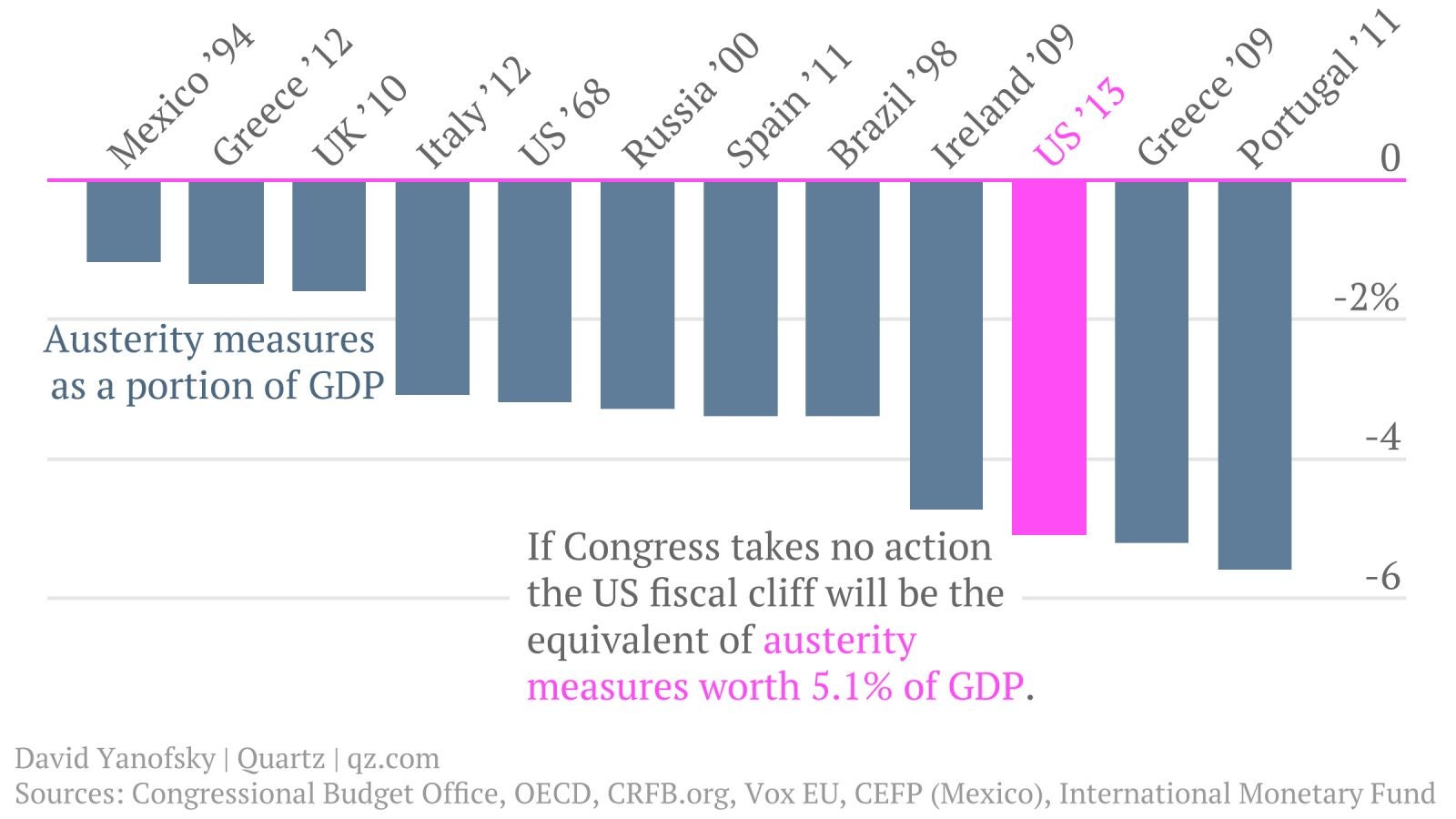 But while the cliff is indeed dangerous if the country were allowed to jump off it without a safety net, the political danger it poses for Barack Obama has been overstated.

The policy has been compared to the debt ceiling debacle of last summer, and the similarities are clear. The executive may well end up facing a similar level of obstructionism from a Republican congress determined to use the crisis to their political advantage, and the hard-and-fast deadline of the negotiations – a rarity in politics as normal – lends the whole thing an extra edge.

But the difference between the two comes from the results of letting that deadline lapse – and it’s there where the cliff could be a blessing in disguise for Obama.

The debt ceiling involved the Republican party turning what should have been a routine vote to raise the amount of debt that the US can hold (the ceiling has been raised roughly once a year since it was introduced) into a chance to gain huge concessions on the level of spending the government was planning. The game was entirely played out on a political stage, with each side trying to convince the other that if the deadline hit and a full government shut-down ensued, their opponents would take the blame in the eyes of the public.

The debates around the fiscal cliff are different, though. Each side wants some, but not all, of the programs which are expiring to be extended. So while the Democrats want to let the Bush tax cuts expire for the richest Americans, the Republicans call for, in the words of Slate‘s Matt Yglesias:

Draconian reductions in the federal government’s commitment to financing health care for the disabled, the elderly, and the poor.

So far, so much like the debt ceiling. The difference comes after the deadline passes.

Currently, the Obama administration is, in effect, arguing for tax rises, while the Republican party argues for spending cuts. But if the deadline passes, what happens is that massive tax rises and spending cuts kick in – far bigger than both parties desire. If that happens, the negotiating calculus changes: from that point, both parties agree on the need for tax cuts and spending increases, and just disagree on the magnitude of it.

The Democrats are then put in a position where they can offer the Republicans targeted tax cuts – re-instating the payroll tax, and the Bush tax cuts for those earning under $250,000 – and even though the Republicans would prefer more, they’ll be inclined to take it because it’s a preferred alternative.

Similarly, so long as the spending increases the democrats offer are preferred to keeping the across-the-board cuts of the fiscal cliff, the Republican party is likely to take them.

It all comes down to who has the power to set the agenda – and in this situation, that seems likely to be president Obama.

If the players were truly rational actors, of course, all of this would mean that the fiscal cliff wouldn’t even need to hit; the Democrats ought to be able to explain this endgame, and the Republicans accept it. That seems unlikely to happen.

The fiscal cliff could actually be a blessing in disguise for Obama. By putting him and the Republicans on the same side of the status quo, he could succeed in opening his second term facing the most obstructionist congress in history with a grand bargain that creates a more liberal America.

Or the Republicans may just throw the baby out with the bathwater and hurt their interests, and America’s, to score points against the president. Again.