The front cover of Bloomberg Businessweek, the print magazine put out by the financial news service which made Bloomberg his fortune, lays his view out starkly: Bloomberg’s editor will brook no dissent:

Our cover story this week may generate controversy, but only among the stupid.buswk.co/PIUzUl via @bw

The cover story, written by Paul M Barrett deals well with the problem climate change brings up in conversation, which is that no single event can ever be directly attributed to it. Did Hurricane Sandy happen because of climate change? We just don’t know. But Barrett writes:

On Oct. 29, [Jonathan Foley, director of the Institute on the Environment at the University of Minnesota] thumbed thusly: “Would this kind of storm happen without climate change? Yes. Fueled by many factors. Is storm stronger because of climate change? Yes.” Eric Pooley, senior vice president of the Environmental Defense Fund (and former deputy editor of Bloomberg Businessweek), offers a baseball analogy: “We can’t say that steroids caused any one home run by Barry Bonds, but steroids sure helped him hit more and hit them farther. Now we have weather on steroids.”

Bloomberg-the-man is also pushing climate change as an issue in his leader for Bloomberg-the-news-service, in which he endorses Obama for re-election as “a President to Lead on Climate Change”:

The floods and fires that swept through our city left a path of destruction that will require years of recovery and rebuilding work. And in the short term, our subway system remains partially shut down, and many city residents and businesses still have no power. In just 14 months, two hurricanes have forced us to evacuate neighborhoods — something our city government had never done before. If this is a trend, it is simply not sustainable.

Our climate is changing. And while the increase in extreme weather we have experienced in New York City and around the world may or may not be the result of it, the risk that it might be — given this week’s devastation — should compel all elected leaders to take immediate action…

We need leadership from the White House — and over the past four years, President Barack Obama has taken major steps to reduce our carbon consumption, including setting higher fuel-efficiency standards for cars and trucks. His administration also has adopted tighter controls on mercury emissions, which will help to close the dirtiest coal power plants (an effort I have supported through my philanthropy), which are estimated to kill 13,000 Americans a year.

The news from the East Coast continues to be alarming; the death toll in Staten Island alone now exceeds that of storm-ravaged Cuba, and as hundreds of thousands remain without power in lower Manhattan, potentially until the weekend of the 10/11 November, things could get worse still. If this disaster does become the first to be indelibly linked in the public’s mind with climate change, it could mark a watershed moment in the fight for the environment.

Our photography director, Rebecca McClelland, reminds me that we used the same photo of the aftermath of Sandy as our In the picture image in this week’s magazine. It’s certainly a compelling shot: 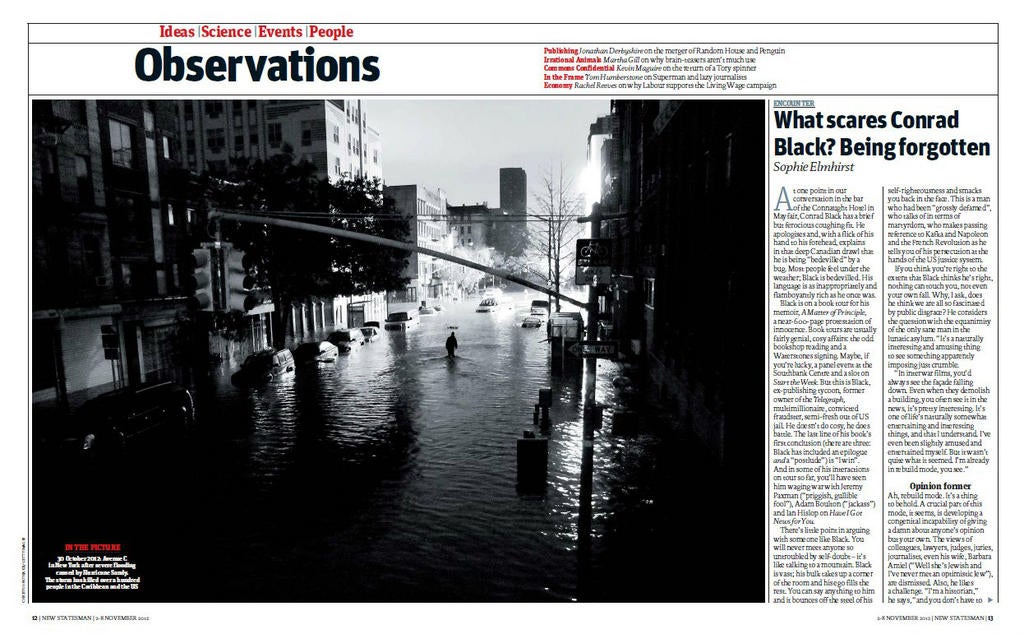