Business Insider‘s Joe Weisenthal touched upon a very interesting aspect of contemporary economics in a recent interview with Bill McBride, the economics blogger who, at his site Calculated Risk gained fame for his remarkable prescience about the global financial crisis, particularly the US housing bubble.

McBride hasn’t stayed with the “doom and gloom” message, though, and has been arguing that there will be a hefty rebound in US GDP for since shortly after the economy bottomed out in 2009. His reasons for thinking that way are an interesting mixture of anecdote – normally verboten for serious economic analysts – carefully chosen statistics, and a few broader macroeconomic indicators.

For example, he argued in January 2009 that the car market (sales were plummeting at the time, and a large part of the collapse in employment and GDP) was bottoming out, and would shortly start to grow again:

So I wrote this article that says look, auto sales are near the bottom – we were at a 9 million annual rate then – I said there’s just no way – we have to be selling 12, 13, 14 million, because people need new cars every 5-7,8 years.

Similarly, the housing market couldn’t stay as weak as it had been for very long, because:

After a while, there’s all this excess supply that was built, then people pulled back and lived with their parents – but people don’t want to live with their parents very long. That supply gets absorbed. When I go out into The Inland Empire I can tell you… If it’s not mostly growing, it’s getting there. Where I live, as soon as foreclosures come on the market there’s people lined up.

In other words, houses and (in most of the US) cars are necessities of life. Demand for them can fall, as people put off purchases or attempt to economise on what they do buy, but eventually, those purchases will be made. A car only lasts so long, and a growing population can only shack up in spare bedrooms for a short while.

Obviously, there is still a fair amount of analysis to perform. McBride’s call on the auto industry was on the money, not just because he realised it couldn’t fall forever, but also because he checked the statistics for average length of car ownership, and pre-crisis sales, and realised that the vehicle lifespan was being pushed to historically long durations.

But the methodology is reminiscent of the (apocryphal) story that some foresight of the 1929 Wall Street Crash was provided by the realisation that the bubble of the “roaring twenties” was driven by the growing adoption of a number of consumer technologies which were nearing saturation point. If economic growth over the last decade has occurred because car ownership rose from 10 to 90 per cent, it is clear that economic growth over the next decade cannot come from the same source.

The problem with these arguments is that there are a lot of specific indicators to choose from, and only some of them will have macroeconomic consequences. McBride was correct about the auto industry, but that doesn’t mean that the method will work every time.

Weisenthal, following the interview, tried his hand at a similar form of analysis: proving the US naysayers wrong by looking at the nation’s demographics. He writes:

When you’ve collapsed SO much, then really simple observations like that are germane because the demographic lift on its own to counteract the hard cyclical downturn.

And that’s where the Americans should be thankful: Because there is in fact a demographic lift.

Japan is probably the economy whose struggles most resemble ours, and that force is much weaker there.

Here’s a comparison of year-over-year population growth rates for Japan and the US going back to 1960. Growth in Japan (red line) has been much slower for decades. 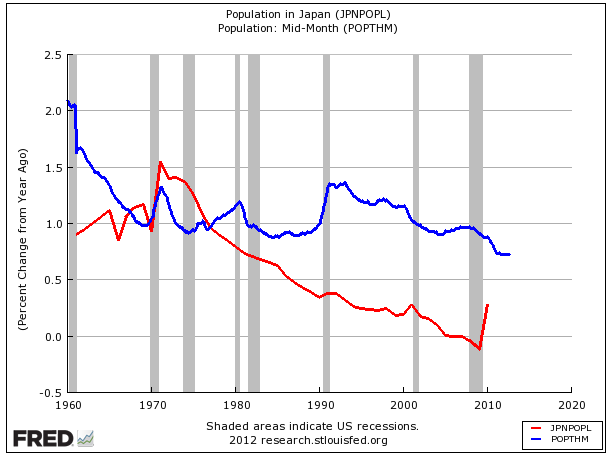 With some knowledge about demographics and the need to replace cars, you could look at a chart like this one (which divides motor vehicle sales by population) and ascertain that the lows seen in 2008/2009 were WAY out of whack with anything vaguely historical. 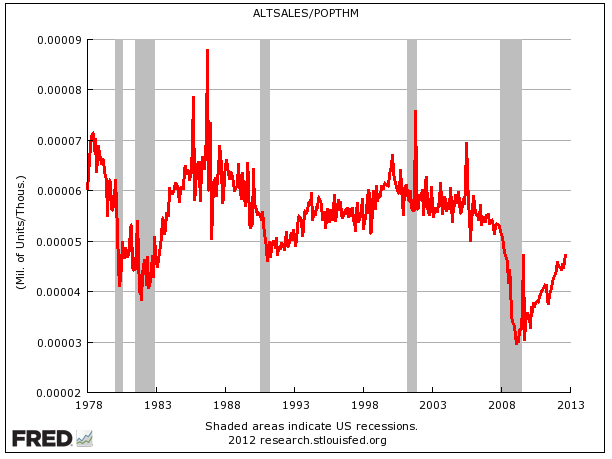 …The overall point is simple: A demographic lift combined with the same innovation and investment that’s gone on for a long time is why the dreams of the doomsayers, who were riding so high just a few years ago, haven’t come to pass.

Japan’s demographic squeeze has been predicted and feared for a long time, but Weisenthal goes further by pinning a lot of hopes on America’s demographic health. Is he right? Time will tell, but one thing which is worth noting is that this demographic lift isn’t something which comes out of nowhere. In fact, it is something which, with the popular consensus around the need to limit immigration, is being actively fought by most US policymakers. We’ve written here about the unintended consequences of that limitation, but hopefully pushing the idea that demographic lift is the nation’s biggest economic hope might do a little to build the coalition on the other side.