Motorists are feeling the pinch. Prices at the pump are rising while most people’s pay packages have barely kept up with inflation in recent years.

But so too are rail users. Many fares will rise by 6.2 per cent while some commuters will face an 11 per cent hike.

New research from IPPR today shows that although it may not feel like it as rising oil costs push up petrol prices, motorists have actually done fairly well over the last decade—especially compared to rail and bus users. From 2000 to 2010, total motoring costs – that is including purchase costs, maintenance, petrol, taxes and insurance – have fallen in real terms by 8 per cent. Meanwhile, rail fares have increased by 17 per cent and bus and coach fares by 24 per cent. 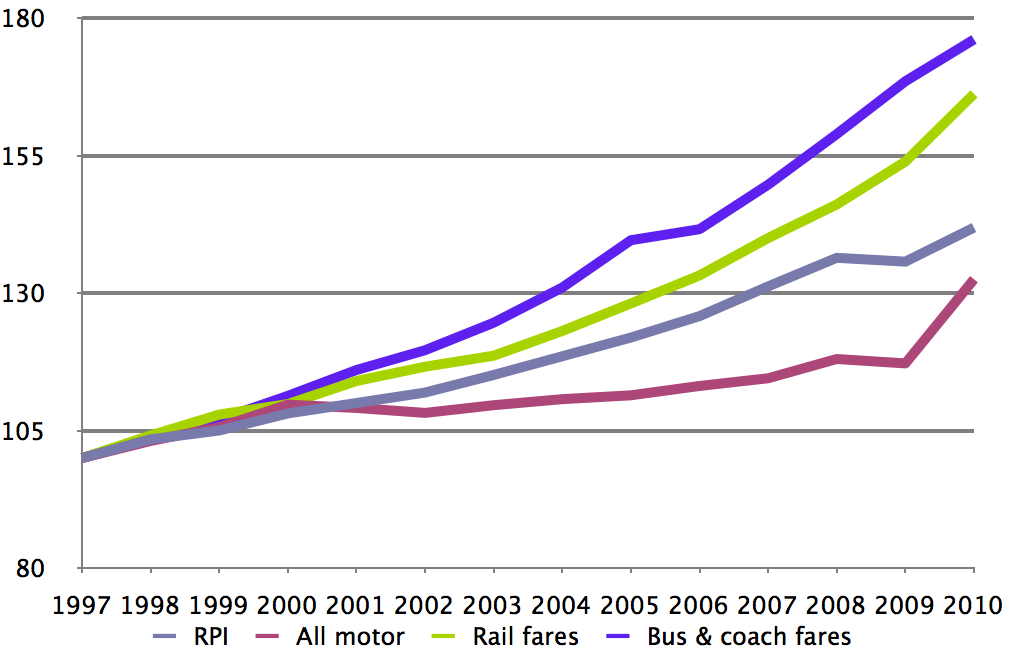 Fuel prices drive perceptions about motoring costs, but only actually account for about a third of an average household’s weekly motoring costs of £77. Although fuel duty rates on petrol and diesel are high compared to other countries, they were actually 7 per cent lower in real terms in 2011 than in 2001. And compared to other countries, British motorists get away without paying a registration tax on a new car and we barely have any toll roads.

Yet since becoming Chancellor, George Osborne has delayed rises in fuel duty on three occasions at a total cost of £2.8 billion per year. In these tough economic times where the Government is trying to cut the deficit, every tax cut has to be paid for elsewhere—whether from cuts to the police, hospitals, or childcare provision.

Oil prices are extremely likely to continue rising over time. Rather than seeking to cushion this blow for UK motorists, planned annual increases in motoring taxes should be part of a rational government policy to make the transport system fairer, more sustainable and more resilient to oil price shocks.

If we are to spend additional money on transport, and there are good arguments for doing so, we should target rail and bus users rather than motorists. Buses are the most available and frequently used mode of public transport in England, making up two-thirds of all passenger journeys. Passenger miles on the railways have increased 60 per cent in a decade.

Everyone is feeling the pinch. But in these tough times, improving bus, coach and rail services and bring down their costs is more important than cutting fuel duty.